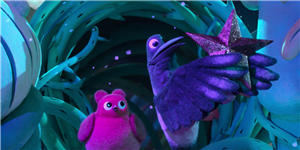 After indulging in a heap of delicious food and Thanksgiving movies for kids, it’s time to crank up the Christmas content. Luckily, we have a list of kid-friendly Christmas specials coming to streaming services this year. After the last Thanksgiving movie ends on Nov. 25, you and your family can tune into these films.

One of the earlier Christmas releases in 2021, Home Sweet Home Alone can double as a Thanksgiving movie for kids. The remake of the 1990 film follows a similar formula: a young boy (Archie Yates) left behind during the holidays has to defend his house from robbers. In this version, though, the robbers (Rob Delaney and Ellie Kemper) are a bit less menacing. Fans of the original should keep an eye out for Buzz McCallister (Devin Ratray).

In the holiday special of Michelle Obama’s kid’s cooking series, Waffles and Mochi scramble to put together a celebration for Freezie Day, a holiday all about food. They bring food from all across the world for the Freezie Day feast. With the focus on a celebration of food, this is also a great option as a Thanksgiving movie for kids.

In this new Maggie Smith-narrated Santa origin story, a boy named Nikolas sets out on a quest to find his long-lost father. He teams up with a mouse and a reindeer to explore an elf village for his dad. The cast also includes Kristen Wiig, Michiel Huisman, Jim Broadbent, and Sally Hawkins.

In this sweet, stop motion film, mice raise a bird named Robin after her egg rolled into a trash dump. Knowing that she’s different from her mouse family, she wants to prove herself. So, with the help of another bird (Richard E. Grant), she attempts a heist on a human home. Along the way, Robin learns a good deal about herself. Gillian Anderson also stars as a villainous cat.

8-Bit Christmas is a bit of 80s nostalgia about a 10-year-old boy in Chicago who will do whatever it takes to get a brand new Nintendo for Christmas. The film is available on Thanksgiving, so it could double as a Thanksgiving movie for kids. Neil Patrick Harris plays an adult version of the character who tells the story to his daughter.

‘Shaun the Sheep: The Flight Before Christmas’ (available 12/3 on Netflix)

In Shaun the Sheep’s latest adventure, the sheep’s raid on the farmhouse to get bigger stockings for Christmas goes wrong, and Timmy goes missing. Shaun and the other sheep have to get Timmy back before he ends up as a present under someone else’s tree.