News photos showed Matty Libatique looking like he’d just been yanked from a barroom brawl; wild-eyed, disheveled, his hands cuffed behind his back.

The Oscar-nominated cinematographer, who shot “A Star is Born,” “Straight Outta Compton,” “Black Swan” and “Iron Man,” had been arrested in northern Poland, accused of slugging a paramedic who came to his side when he collapsed in a hotel lobby during a film festival there.

Hollywood’s trade news and gossip sites reported the November 2018 incident, and Mr. Libatique’s colleagues made light of it a few days later when he returned to the United States.

But the joking was lost on Mr. Libatique, who says he can remember nothing about his collapse or what followed. He admits he had been drinking but fears, he said, with some evidence, that he was intentionally drugged.

What is incontrovertible is that he now faces possibly four and a half years in prison.

Though the Polish authorities pursue several thousand assault cases a year without much fanfare, the country’s top law enforcement official, the national Minister of Justice, Zbigniew Ziobro, took an interest in this one.

He remarked on Mr. Libatique’s case during a news conference the day after the cinematographer’s arrest. Too many paramedics were being assaulted nationwide, Mr. Ziobro said, and he urged prosecutors to “demand much more severe penalties.”

Polish paramedics have, in fact, been sounding the alarm about violence on the job. A recent study found nearly all of the paramedics polled had experienced aggression on the job, though the majority did not report assaults to police. 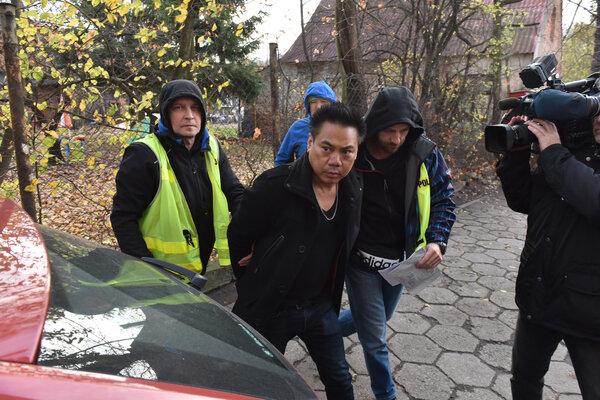 But Marcin Matczak, a law professor at the University of Warsaw, who studies Poland’s criminal justice system and is a critic of the national government, said he thought Mr. Ziobro was blowing the Libatique matter out of proportion to burnish his image as a defender of the common man.

“He was used by the minister of justice for his own populistic propaganda,” the professor said.

Mr. Ziobro’s office said in a statement that the justice minister had not singled out Mr. Libatique’s arrest but that the issue needed to be addressed because of “the increasing number of cases of assault on doctors, paramedics and medical staff providing assistance.”

“While performing their duties outside of the hospital, e.g. during mass events and in dangerous locations, they often fall prey to violence on the part of people under the influence of alcohol or psychoactive substances,” the statement said.

Mr. Libatique’s defense lawyer, Marcin Maminski, has argued that the national government has improperly meddled in the case, leaning on local prosecutors to an unusual extent. And though first offenders rarely receive harsh sentences, Mr. Libatique worries that, if he is convicted, prosecutors will push for the full three-year term on the assault charge plus another 1.5 years on a second charge he faces — “wybryk chuligański,” or hooliganism. They had tried to hold him for months without bail while he awaited trial until Polish judges ruled otherwise.

“I’m basically guilty until proven innocent and it scares me,” Mr. Libatique said, speaking from his home in Los Angeles.

Now he fears extradition back to a country where, in November 2018, he was treated, at first, like a rock star. He went there to attend Camerimage, a festival for directors of photography that draws a glittering international crowd to Bydgoszcz, about 180 miles northwest of Warsaw.

Mr. Libatique is known among cinematographers and their fans for edgy, highly polished shots that plunge audiences into the quivering psyches of characters, and the menace, sorrow, and ecstasy of their worlds. He earned a reputation for risk taking at the outset of his career, after shooting his film school buddy Darren Aronofsky’s early fever-dream films, among them “Pi,” and the sumptuously disturbing “Requiem for a Dream” (they’ve done six feature films together). In an email, Mr. Aronofsky described Mr. Libatique as a dogged perfectionist with a masterly eye: “his passion never wanes,” Mr. Aronofsky said. Mr. Libatique has also worked with Spike Lee, Joel Schumacher and Jon Favreau.

Stephen Pizzello, editor in chief of American Cinematographer magazine and one of Mr. Libatique’s longtime friends, said Mr. Libatique was “sort of a legend” at the Polish festival. “Matty’s in that class of guys who get mobbed,” Mr. Pizzello said. “Everybody loves the guy.”

On his last night there, Mr. Libatique and his partner, Mary Ellen Vales, went pub- and party-hopping into the wee hours.

Sometime after midnight, Mr. Libatique was holding a beer when he said someone — he doesn’t remember who — pressed a vodka drink into his hand.

After that, a curtain drops around his memory, he said.

But Ms. Vales, who was with him, said that shortly after 4 a.m., inside a club, Mr. Libatique started stumbling. He was talking gibberish, and later began weeping. A cab took them to the hotel and the driver lugged Mr. Libatique to a couch. But he was dead weight, and slid to the floor, where he started convulsing and foaming at the mouth. Ms. Vales cried to the concierge for help.

According to prosecutors, Libatique fought back when they tried to help him, breaking one of the paramedic’s teeth and later kicking a policeman.

Ms. Vales said the paramedics were rough with Mr. Libatique as they hauled him across the glossy tiled floor toward a more open space. Mr. Libatique responded as if attacked, flailing and yelling obscenities, and then took a swing, connecting with one of the paramedic’s faces, she said.

Mr. Libatique’s memories of that morning are dim. He said he remembers waking up in hospital, his wrists and back sore, his face aching. He had never, he says, blacked out before from drinking, or come close to creating a scene, a claim his friends support.

“I remember trying to stay calm,” Mr. Libatique said. “And I remember trying to remember things.” He pieced together that he had hit someone, and would have to apologize, which he later did in court, saying he was sorry, he recalled, to the victims of his actions, the people of Bydgoszcz and to the Camerimage festival organizers.

Mr. Libatique was held for several nights in jail until a judge freed him, dismissing the prosecutors’ request that he be held until trial. Libatique was legally allowed to leave the country, but was fearful of being stopped at the airport, so he and Ms. Vales were driven by car into Germany at night

Two days later they returned to the U.S. where they later learned that prosecutors had appealed the decision to release him and were demanding the equivalent of $26,000 in bail, which Mr. Libatique paid.

But he’s carried on working, opting to lay low and make scant mention of the case, even as some people joshed about him having a wild night out. When Hollywood awards season kicked into gear in late 2018, he largely ducked out of promoting his work on “A Star is Born,” though it earned him his second Academy Award nomination. He was hired to shoot “Birds of Prey (And the Fantabulous Emancipation of One Harley Quinn),” and Ryan Murphy’s “The Prom,” a musical to be released next month on Netflix.

Back in Poland, the case proceeded from one year to the next. Mr. Libatique’s lawyers have been challenging the prosecution’s argument that he was simply wildly drunk. According to official reports, blood taken from Mr. Libatique at the hospital showed a sky-high alcohol level of 0.30 percent. (In New York state, a charge of driving while intoxicated is triggered by a blood alcohol level of .08 percent.)

But Mr. Maminski contests that finding as false, and said he has separately submitted court filings accusing the paramedics and doctors who attended to Mr. Libatique of malpractice, though he would not elaborate on what basis.

The defense cannot definitively prove that Mr. Libatique was drugged, only that he might have been. Last year, in response to growing numbers of tourists getting drugged in Poland, the United States embassy in Warsaw issued a security alert. A toxicologist hired by the defense reported earlier this year that DNA samples taken from Mr. Libatique’s hair indicated he could have been drugged with GHB, the so-called date-rape drug. High levels of dextromethorphan, or DXM, a cough medicine stimulant used recreationally for “robo-tripping,” were also found. Mr. Maminski said his client had not willingly ingested either substance.

“It’s obvious that the prosecutor’s office in this case is not acting independently and is in fact following orders of superiors, not trying to establish the truth,” Mr. Maminski said.

A spokesman for the prosecutors’ office in Bydgoszcz, Włodzimierz Marszałkowski, said the toxicology test of hair samples cited by the defense was suspect because it had been taken nearly two months after the event.

Mr. Marszałkowski also denied that Mr. Libatique had been roughly handled and said he was being treating just like anyone else. Mr. Libatique’s avowal that he was not aware of what had happened and had no control over his actions only hurt his case, the spokesman said.

“In Poland, the fact that you’re under the influence of alcohol does not constitute a mitigating factor but an aggravating one,” Mr. Marszałkowski said.

Mr. Libatique’s trial is schedule to start in February and he and Ms. Vales expect to be allowed to testify from the United States over a video link.

Even during the pandemic, Mr. Libatique is working still, shooting Olivia Wilde’s latest picture, “Don’t Worry Darling,” near Palm Springs. But he said he’s turned down plum opportunities to work abroad, among them shooting Bradley Cooper’s new Leonard Bernstein film in London, because he is no longer comfortable leaving the country.

He and Ms. Vales are now engaged, but have put off getting married because of the stress of a case that friends say presents Mr. Libatique as a belligerent drunk, as a person they do not recognize.

“I’ve spent a lot of time with Matty all over the world,” Mr. Aronofsky said, “and he is always a gentleman.”