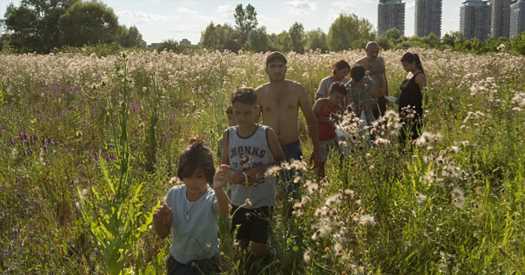 The home in “Acasa, My Home” is a wild, marshy expanse on the outskirts of Bucharest, an abandoned reservoir populated mainly by birds, fish and insects. At the beginning of this documentary, directed by Radu Ciorniciuc, the only human residents are Gica Enache, his wife, Niculina, and their nine children. Surrounded by chickens, hogs, pigeons and dogs, they live in proud, occasionally belligerent defiance of “civilization,” a word Gica utters with disdain.

The children run through the reeds, catch fish with their bare hands, wrestle with swans and perform household chores. The scene isn’t entirely pastoral, though, and Gica isn’t exactly Henry David Thoreau. He’s a moody patriarch, part anarchist and part autocrat, shielding his family from the power of the state with his own sometimes tyrannical authority. When he’s confronted by social workers, the police and other officials, he’s not always diplomatic. At one point, he threatens to set himself on fire. “These are my children, and I can kill them if I want” might not be the best thing to say to child welfare officers.

Filmed over four years, “Acasa” tells the complicated, bittersweet story of Gica’s defeat. When the Romanian government designates the area as a protected nature park — reportedly the largest in a major European city — the Enaches are forced out. They dismantle their house, a sprawling structure made of blankets and plastic sheeting draped over a makeshift wooden frame, and move into an apartment. The children, provided with haircuts, shoes and new clothes, attend school regularly for the first time. The oldest son, Vali, finds a girlfriend and asserts a measure of independence from his father.

Does this represent progress or catastrophe? For Gica, the answer is clear: Everything he values has been taken away. But while Ciorniciuc views him with evident sympathy and respect, “Acasa” isn’t an uncritical or romantic tale of paradise lost. You can see the park administrators, government ministers and municipal bureaucrats through Gica’s eyes — as smiling, condescending agents of a force that disturbs his peace and threatens his identity. You can also see him from their perspective, as a man subjecting his family to dangerous and unsanitary conditions who needs to be protected from his own impulses.

The film is not static. It’s dialectical — constructing its narrative as an argument between two opposed positions, neither of which is fully embraced. There is a nobility to Niculina and Gica as they try to resist the power of a state convinced of its own benevolence. And the actions of the state are not entirely unreasonable. It’s not as simple as taking the side of individualism against government, or for that matter of being in favor of parks, schools and a decent social order.

That’s all fairly abstract, but “Acasa” is full of ideas because it contains so much life. It’s both intimate and analytical, a sensitive portrait of real people undergoing enormous change and a meditation on what that change might mean. It taps into something primal in the human condition, a basic conflict between the desire for freedom and the tendency toward organization — an argument, finally, about the meaning of home.

Acasa, My Home
Not rated. In Romanian, with subtitles. Running time: 1 hour 26 minutes. In theaters and on Kino Marquee. Please consult the guidelines outlined by the Centers for Disease Control and Prevention before watching movies inside theaters.