Film has a sometimes troubling relationship with authenticity. However, in coming-of-age films, the authenticity of having child actors in the roles gives the films a certain flair that makes them shine. One notable example is the forthcoming Good Boys, a raucous coming-of-age film for tweenage boys. It features three lead actors who are only a few years older than the 12-year-olds they are playing. There is a touching innocence that marks their performance and produces memorable scenes, such as mistaking their parents’ sex toys for nunchucks and indoor swings. In films about the experience of growing up, there is a certain flavour that can be mimicked but not recreated by older actors.

Eighth Grade is another film to be applauded for its awkwardly sweet look at what it means to be a schoolkid in the digital age. Elsie Fisher slots naturally into protagonist Kayla’s hunched posture and curtain of hair that protects her from the outside world. Having started filming almost immediately after finishing eighth grade herself, her performance as Kayla is all the more riveting for the way she taps into her own recent experience. This is what creates the film’s cringey charm. 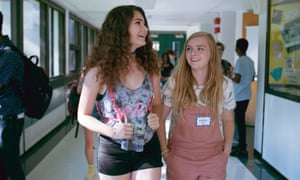 This is hardly a recent phenomenon. Garance Marillier was only 18 when she played Justine in Raw, the French feminist cannibal phenomenon that shocked Cannes with a ferocious portrayal of burgeoning teenage sexuality. Stand By Me has stood the test of time because of the boyhoods of River Phoenix and co, endearing them to new generations of audiences. Richard Linklater’s Boyhood went a step further, taking 12 years to film, while boy actor Ellar Coltrane grew into a young man. Comparing these films to Good Boys and Eighth Grade, it is encouraging to see that the essence of growing up hasn’t changed, even if most of it is now done online.

This isn’t always the case. There are a slew of coming-of-age films that feature young adults playing teenage characters – Beanie Feldstein and Kaitlyn Dever in Booksmart, Saoirse Ronan in Lady Bird, even Rachel McAdams in Mean Girls. They give no less convincing performances because of their age, but there is a subtle difference: because they are recalled rather than recent, their performances are overly enhanced versions of how an adolescent might act. Stockard Channing was 33 when Grease was filmed; this reveals itself in Rizzo’s knowing attitude to sex, which stems from Channing’s age and experience. While this makes Rizzo a fan favourite as someone to aspire to, it creates a fiction of adolescence that isn’t realistic for any teenagers watching the film.

It doesn’t always work flawlessly. Early Harry Potter films are more vital for their nostalgic value rather than the young trio’s acting chops – but a film series about a young boy navigating his way through wizarding school would have felt false with an adult actor in the main role. We were all teenagers once and have our own experiences of what that was like; there is something special that can be learnt from allowing the young to take centre stage.