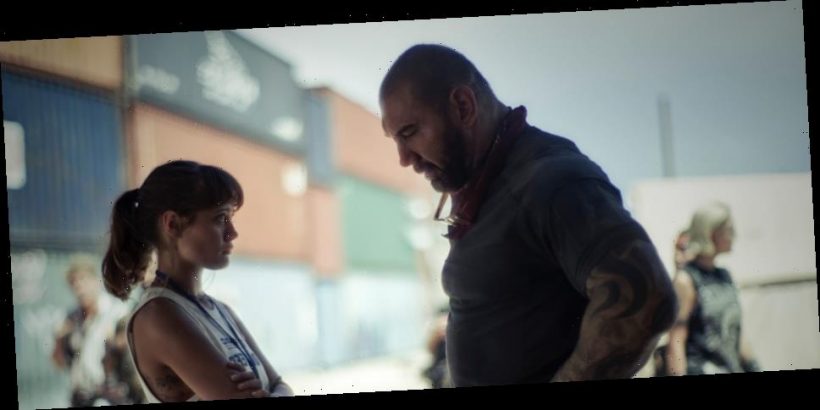 While everyone keeps talking about Zack Snyder’s Justice League, it’s worth remembering that Zack Snyder has a completely separate movie due out this year: Army of the Dead, a heist flick set during a zombie apocalypse. A new Army of the Dead image has just arrived featuring star Dave Bautista, and in an article accompanying the image, Bautista says that Snyder’s zombie movie has “something special” that sets it apart from all the other zombie-based entertainment out there. Bautista also reveals that he tried to land a role on The Walking Dead once – but was turned down due to his bulky size.

The Army of the Dead image above comes from Empire, and features star Dave Bautista holding some green glow-sticks. Perhaps he’s going to a rave, or trick-or-treating. Or perhaps he’s using them to fend off zombies. The image also includes Matthias Schweighöfer, who plays a safe-cracker named Dieter. In the article that accompanies the new image, Bautista offered high-praise for Army of the Dead, specifically because he thinks it’s different than the large body of zombie-related material out there.

“For me, there had to be something special about a zombie film for me to sign up,” Bautista said. “What sets us apart is the heist. But there’s a whole bunch of different layers to this film.” Bautista also humorously revealed that at one point, he tried to land a role on The Walking Dead, but was denied because of his size (he’s a really big guy, folks). “I tried to get on Walking Dead for years,” Bautista added. “I said I would come and play a zombie for free, but they said, ‘You’re too big!’”

In Army of the Dead, “Following a zombie outbreak in Las Vegas, a group of mercenaries take the ultimate gamble, venturing into the quarantine zone to pull off the greatest heist ever attempted.” This is a fun premise, although a part of me has to wonder: what good is money during an apocalypse? Wouldn’t the economy completely collapse, thus rendering any sort of heist pointless? Perhaps the film will go into this. Perhaps the zombie outbreak is only temporary. In any case, I’m interested to see director Zack Snyder return to zombie movies. His first feature film was the surprisingly very good 2004 remake of Dawn of the Dead, and I’m much more excited about a new Snyder zombie movie than I am about Snyder returning to the world of superheroes. I’m also a fan of Bautista, who seems to be one of the few wrestlers-turned-actors who actually takes the craft seriously and tries to challenge himself with his roles.