Halfway through “Bad Hair,” Justin Simien’s horror-comedy on Hulu, a group of Black women sit in a conference room and debate the merits of changing their hairstyles to conform to the new corporate climate at Culture, the Black music television network where they work.

Donning large gold hoop earrings, a slouchy beanie hat and a head full of natural coiled curls, Sista Soul (Yaani King Mondschein), a VJ there, is the last holdout. “I’m not changing who I am just to appeal to some whiter,” she asserts, before pausing and then correcting herself, “wider demographic.”

After flipping her own newly sewn-in hair weave, Anna (Elle Lorraine), Sista’s colleague and the focus of the movie, calmly retorts, “No one is asking you to change who you are. Just the way you look.”

Such a pivot is impossible because the weaves in “Bad Hair” are actually evil spirits that possess and take over the personalities of the women wearing them, eventually turning the natural-hair wearing Anna, who is painfully shy at the beginning of the film, into a long-flowing-maned unwitting serial killer. 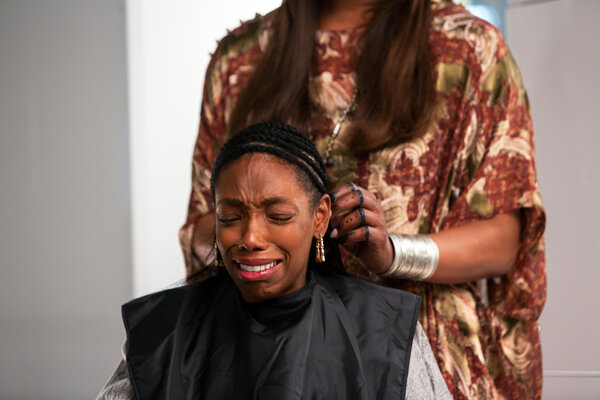 Simien (“Dear White People”) has described his satire horror as “a very weird love letter to Black women and the unparalleled power they possess to endure and persevere,” and he set his film in 1989, the year that Black Entertainment Television debuted “Rap City.” That hip-hop music video show featured an astounding number of Black women entertainers and dancers wearing weaves. At the same time, regular women found weaves more available, though still quite expensive, as well as more diverse in color, texture and application techniques, making it substantially harder to discern whether the look was real or fake.

Simien’s love letter is more a cheeky lament that mourns the huge financial costs and psychological toll those early hair weaves took on Black women. But the real loss is the movie’s portrayal of Black women’s hair as a commodity and competition for which they are willing to die or kill. In contrast, a recent crop of French and American films, including “Hair Wolf,” “Nappily Ever After” and “Le Bleu Blanc Rouge De Mes Cheveux,” have also taken up themes involving hair and cultural assimilation. But these films, along with “Chez Jolie Coiffure” and “Liberty,” all directed by women of color, reveal what also might be gained when Black women shape their own hair cultures as spaces of ingenuity, intimacy and communal pride.

In many ways, “Bad Hair” is very much like “Good Hair,” the 2009 documentary narrated by Chris Rock and inspired by his desire to understand the obsession that his daughters and other Black girls and women have with “good hair.” That term is often used among African-Americans to valorize naturally straight or wavy hair, and denigrate the more tightly coiled “bad” hair textures. In addition to traveling to hair shows in Atlanta and beauty parlors and barbershops in Brooklyn, Rock journeys to India in search of the women who sell their hair for weaves. In one particularly notable discussion with the Rev. Al Sharpton, both men bemoan the amount of money Black women spend on their hair, only to commiserate over what seems to really bother them: how expensive it is for them and other Black fathers and husbands who are expected to bear the costs.

That scene did not age well. Watching the movie again recently, I was struck by how much Rock diagnosed “good hair” as a desire of mainly Black women, without reflecting on how often, even in the casting of his movies, Black women with long, wavy hair are considered more attractive, and thus imbued with more social capital, than other Black women.

It’s a different story when women are in charge of the narratives. “Hair Wolf,” by Mariama Diallo, and “Nappily Ever After,” by Haifaa al-Mansour (“Wadjda”), also take those contradictions head-on, but from the vantage point of Black female protagonists who must learn to embrace their natural hair as a form of racial resistance and women’s empowerment.

The horror-comedy short “Hair Wolf” (available on HBO) takes place in a Black salon whose staff has to stick together to fend off the vampiric impulses of Rebecca, a white woman who appropriates African-American culture — Black hairstyles, the Black Lives Matter movement, even Black men. The only way that the glamorously dressed, natural-hair-wearing Cami (Kara Young) and Eve (Taliah Webster) who work there can resist these incursions is by conjuring up the names of Black women like Tina Turner, Janet Jackson, Angela Bassett, and Gabrielle Union, whose enduring beauty seems to resist the demands of aging and time.

The Netflix romantic comedy “Nappily Ever After” (based on the novel of the same name by Trisha R. Thomas) stars Sanaa Lathan as Violet, a marketing executive who accidentally loses her hair after wearing a chemical relaxer for too long. When she breaks up with her noncommittal boyfriend, the movie explores her many stages of grief and various hairstyles. (She tries weaves, going blonde, shaving it all off, and the press and curl.) As with Anna from “Bad Hair,” Violet’s hair drama began as childhood trauma, and to overcome it, she must shed the baggage of her past, as well as cut all her hair off.

And yet, sometimes one woman’s liberation might be another girl’s oppression. At least this is true of Josza Anjembe’s 2016 “Le Bleu Blanc Rouge De Mes Cheveux,” a short about Seyna (Grace Seri), a 17-year-old Cameroonian who wants to be a French citizen. Against her father’s wishes, Seyna is ready to denounce her nationality and tries to submit her paperwork for naturalization, only to be turned away because her Afro sticks out too much for her official photo ID. After all her locks are shaved off, Seyna must decide if becoming a French national is worth losing so much of her identity and culture.

While debates about immigration partly inspired Rosine Mfetgo Mbakam’s 2019 documentary “Chez Jolie Coiffure,” it is also about Sabine, a Cameroonian immigrant who runs the Jolie Coiffure salon in what’s known as the African quarter of Brussels. Much like the 2005 “Beauty Shop” starring and produced by Queen Latifah, Mbakam’s movie highlights the ingenuity of Black stylists who are expected to be as versatile as Black women’s hair itself and be able to cut natural hair, add extensions and put in chemical relaxers. But, because “Chez Jolie Coiffure” is shot entirely in the confines of the shop, the film also reveals how Black immigrant women value the salon as a familiar space in an unfamiliar country, a center where they can also go to seek legal advice and join informal professional networks.

Displacement and loss drive Faren Humes’s “Liberty,” a short about two girls, Loggy (Milagros Gilbert) and Alex (Alexandra Jackson) who are preparing to dance at a groundbreaking ceremony for the development of new homes at Liberty Square, one of the oldest public housing sites in the country. The construction not only interrupts their rehearsals with its noise but also tests the bond of their friendship when Alex tells Loggy that she has to move because her building is scheduled to be demolished. In images evocative of the braiding scenes in Julie Dash’s “Daughters of the Dust,” Humes offers up the intimacy of Black girls doing each other’s hair as a salve providing a sense of sisterhood in the face of the unknown.

In that tense conversation with Sista Soul in “Bad Hair,” Brook-Lynne (Lena Waithe) tries to convince her to change by noting, “Black women are magic, you know that. We could put our hair all the way up to the sky, drape it down to our shoulders, or somewhere in between,” she says.

These movies show that vitality and much more by reminding us of how Black women have used their hair to reveal its other powers: its ability to inspire, connect and heal.