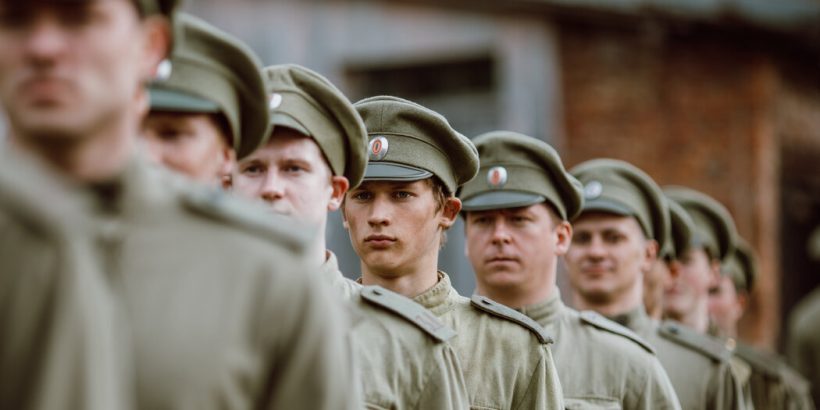 This World War I story opens on a striking tableau, one that illustrates its title. A traveling shot takes in a battlefield where a coating of snow almost, but not quite, camouflages the corpses of dozens of dead soldiers.

That is about as harrowing as this movie, directed by Dzintars Dreibergs from a 1934 novel by Aleksandrs Grins, gets. As so many war pictures do, “Blizzard of Souls” tells the story of a young man, Arturs Vanag (the fresh-faced Oto Brantevics). At the movie’s outset, he’s a sweet teen on a farm. Then one afternoon, some German soldiers happen by and kill his mother and the family dog. So he signs on with the Latvian battalion of the Imperial Russian Army, along with his father and brother.

For a time, war is heck. The recruits train in the mud with wooden models of rifles, but during their down time, they frolic in surprisingly clean tunics. One infers the food at camp isn’t bad either. In actual battle, down in the trenches, a mortar explosion temporarily deafens the soldiers, one of whom reacts with a “wow, that was weird” grin. On the offensive, Arturs comes toe-to-toe with a German soldier and, after a moment of hesitation, bayonets him. It’s his duty, after all. Plus, they killed his mom and his dog.

“Blizzard” is almost immaculately shot and edited, but its good-taste approach to warfare, along with its treacly music score by Lolita Ritmanis, underscores what seems its main reason for being: a relentless “Go, Latvia!” agenda — which has extended to its marketing here. It is the country’s official entry in the International Feature Film category of the Academy Awards.