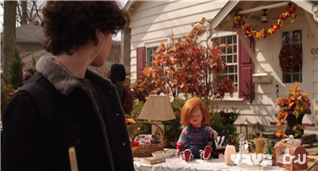 The Child’s Play/Chucky series, normally a staple on the big screen in years past, is alive and well…and heading to a new medium. From series creator Don Mancini, the infamous killer doll is now making the jump to television and terrorizing a whole new neighborhood after turning up, innocuously enough, at a local garage sale. Mayhem predictably ensues. Check out the creepy teaser below.

The 30 seconds of footage isn’t exactly heavy on any major revelations, though fans should have plenty to be happy about here. Mostly serving as an introductory tone-setter, the one major takeaway from the teaser is probably the fact that this TV series seems to be doubling down on the horror-driven tone that made the original so successful in the first place. That would be something of a return to form, especially after the last few movies took slight detours into horror-comedy territory.

Oh, and Mancini specifically draws attention to the fact that this Chucky doll is based on the version featured in the 1990 sequel. He told Entertainment Weekly.

“Over the years, I’ve heard that the consensus fan favorite among all the movies is Child’s Play 2. I think one of the reasons for that is how Chucky looked in that movie and how the late director John Lafia, who passed away last year, shot Chucky. Our goal with the series was to bring Chucky’s look precisely back to that. Tony Gardner and Peter Chevako (special effects artists responsible for creating the show’s puppets) have done a great job. I think fans are really going to love that.”

With Don Mancini at the wheel once again as showrunner, this franchise has the distinction of being one of the longest-running horror series out there to have employed one main voice throughout practically every single entry. Notably, this series will actually ignore the reboot/remake and instead take place within the original continuity that started with 1988’s Child’s Play. Mancini offered some more details on what to expect from the show’s main character, played by Zackary Arthur (of Transparent fame), and the new direction he’s taking things here:

“The main character is a 14-year-old gay boy who’s bullied and sort of lost after the recent death of his mother. He’s a young artist [making] sculptures with doll parts. He finds Chucky at a yard sale and buys him, but it turns out that he gets much more than he bargained for. One of the things I wanted to do was bring [the franchise] back to its Child’s Play roots and have the protagonists [be] kids. But since, with the first couple of movies, we’d already delved into having little kids I wanted to explore something different, so this time we’re exploring young teenagers.”

Joining Arthur will be a couple of franchise newcomers in Lexa Doig (Jason X) and Devon Sawa (Final Destination), and also loads of returning familiar faces in Jennifer Tilly, Fiona Dourif, Alex Vincent, and Christine Elise. Brad Dourif, of course, is once again set to reprise his role as the voice of the sinister Chucky.

In extolling the franchise’s clear sense of direction and consistency, Mancini also adds:

“One of the things that we pride ourselves on, and I think makes our franchise singular, is that we have spun a relatively consistent and coherent narrative over the course of 33 years and seven films and now eight episodes of television. I think that’s one of the things that our fans like about the Chucky franchise. I deliberately ended Cult of Chucky on a series of cliffhangers, major cliffhangers, because I knew a TV series would be the ideal place to accommodate delving into the ramifications. So we begin the series introducing our new story, our new milieu, and then we start to bring the veteran characters into the story, and it all comes together for a big showdown.”

Should this series prove to be a hit, fans can rest assured that there will be future plans in store in both television and film. According to Mancini: “We have plans to do that, whether in lieu of additional seasons of the series, or in tandem with [them], potentially. We’re creating a broader Chucky universe with the TV series that now could span over different media.”

Chucky will invade our television screens on October 12, 2021 on USA and SYFY.