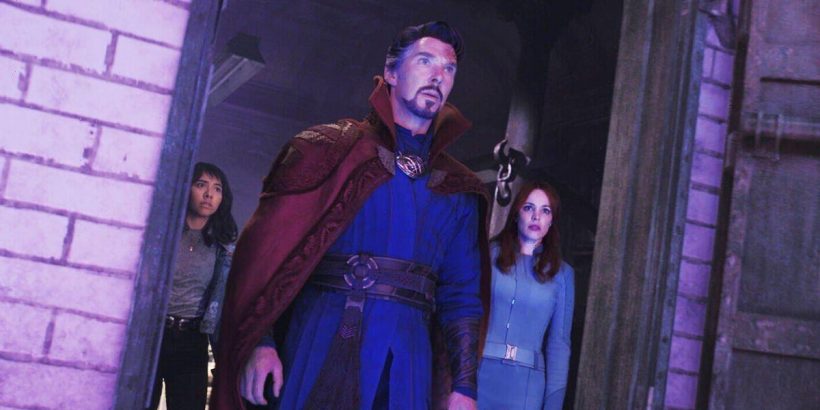 Doctor Strange in the Multiverse of Madness trailer

WARNING: THIS REVIEW IS FOR FANS WHO HAVE ALREADY SEEN THE MOVIE – MASSIVE SPOILERS FOR DOCTOR STRANGE IN THE MULTIVERSE OF MADNESS AHEAD. Doctor Strange has been very busy since he was first inducted into the MCU with his solo movie back in 2016. Since then, Benedict Cumberbatch’s sorcerer has been something of a supporting character to long-established Marvel superheroes in the franchise, cameoing in Thor Ragnarok, before actually playing a crucial role in the two-part crossover extravaganza that was Avengers Infinity War and Avengers Endgame. He then returned last Christmas to begrudgingly assist Peter Parker in Spider-Man: No Way Home, as villains from alternate realities started popping up. Now, finally, the focus is back on the Master of the Mystic Arts in Doctor Strange in the Multiverse of Madness, and boy we’ve never seen a movie like this highly ambitious entry before.

Since Avengers Endgame, the MCU has committed to opening up the infinite Marvel multiverse as the key focus of the franchise going forwards.

This was further solidified when Tobey Maguire and Andrew Garfield returned as their Peter Parkers to join Holland in Spider-Man: No Way Home, and now Doctor Strange 2 is expanding on these concepts that once were relegated to niche discussions among comic book geeks.

In short, the multiverse has gone mainstream and Marvel are confident that audiences who pop in for the odd superhero movie every now and then will be able to keep up with its convoluted complexities, alongside the most devoted fans.

For better or worse, this hasn’t been done before, so is very much a unique turning point in blockbuster tentpole cinema and could well be the key to the MCU staying fresh through its own evolution.

Apart from exploring the multiverse, what better way to do that than by trying different genres across these films and TV miniseries set in the same universe(s)?

Disney’s Marvel movies may only be 12s, but for the first time, they’ve made a horror in Doctor Strange in the Multiverse of Madness.

Tobey Maguire Spider-Man and Evil Dead trilogies director Sam Raimi has helmed this outing, bringing all his best jump scares and creepy tropes with him, ones that help make this outing feel really fresh. The faint-hearted shouldn’t worry, it’s only as scary as a Brendan Fraser Mummy movie but really, really weird in a great way that’s true to the title character.

Doctor Strange in the Multiverse of Madness finds Cumberbatch’s sorcerer haunted by dreams of alternate realities. After attending the wedding of his ex Christine (Rachel McAdams), he finds a new superhero battling a huge tentacled beast in the middle of New York City.

Accompanied by Sorcerer Supreme Wong (Benedict Wong), they meet America Chavez (Xochitl Gomez) a teenager from another reality who has the ability to travel the multiverse when she’s afraid.

It’s not long before we discover that Wanda Maximoff, in a career-best performance from Elizabeth Olsen, is bent on capturing the girl to steal her power and find a universe where the children she created in WandaVision exist. Yes. Scarlet Witch is the film’s villain.

The most powerful Avenger storms Kamar-Taj where the sorcerers are protecting America Chavez, in a terrifying, earth-shattering and relentless attack that leaves many corpses behind.

Nevertheless, Strange and America manage to escape Scarlet Witch’s uncompromising grasp by traversing the multiverse; leaving the MCU’s Earth-616 and landing in Earth-838. Here, screenwriter Michael Waldron (who also penned Loki) introduces us to the concept of another world that’s not too dissimilar to our own.

As a result, the film ends up feeling like a serious episode of Ricky and Morty, of which this scribe’s an alumni, much to our geeky glee. What follows are those big cameos that have been rumoured for the last couple of years.

Strange comes across a friendlier version of Baron Mordo (Chiwetel Ejiofor) than the one in his first solo movie, before both he and America are drugged and captured by the Illuminati, the equivalent of the Avengers in this universe.

Sir Patrick Stewart’s Professor X, who was teased in the trailers, is frailer than we’re used to seeing him, but just as charming in his X-Men comic book yellow chair.

He’s accompanied by the stunning Captain Carter, Hayley Atwell’s alternate Captain America from the What If…? Disney+ show, along with a Maria Rambeau Captain Marvel played by No Time To Die’s Lashana Lynch.

If that wasn’t enough, Anson Mount returns as Black Bolt after his ill-fated Inhumans TV series, but there was one cameo that had the audience screaming their heads off.

Fantastic Four’s Reed Richards was the final member of the Illuminati introduced, played beautifully by none other than John Krasinski, who the internet has been fan casting in the role since Disney bought the rights to Mr Fantastic with Fox.

It’s not long before Scarlet Witch, back on Earth-616, discovers she can “dream walk” by taking control of the body of one of her variants in another universe to hunt Strange and America.

Enter a spectacular fight scene between Wanda, ravenous and bloodied like a zombie, obliterating these fan favourite cameo Illuminati figures, while Strange escapes with a Christine variant to another universe; a character sadly almost as underused as in the first film.

In this doomed reality, the sorcerer comes across his sinister self from the first trailer, one who he relieves of that universe’s copy of the Darkhold, the ancient book of the damned from the Dark Dimension Scarlet Witch has been using to dream walk. This is where it gets pretty bizarre, but all the more entertaining.

Strange dream walks into the corpse of his variant in Earth-616 that arrived there dead with America at the beginning. This explains the zombie in the trailer and gives Raimi plenty of fun with more horror tropes, especially as the souls of the damned start attacking the sorcerer who ends up using them to reach Scarlet Witch for a final battle.

This scene, much like most of Doctor Strange in the Multiverse of Madness, is heavily reliant on CGI. Some fans will find this too much no doubt, although – to be honest – it does look really good.

After Wanda comes round to not being a villain having seen how much she freaked out her alternate kids, the film’s big cliffhanger sees Cumberbatch’s sorcerer developing a third eye just like Sinister Strange, showing he’s been affected by the Darkhold after all.

Despite all the hype from the spoiler-free trailers, Doctor Strange in the Multiverse of Madness was a much smaller affair than some fans may have been expecting, but that’s actually okay.

The MCU is only just starting to build up once again to an Avengers-level crossover, but in the meantime still needs to introduce audiences slowly to the concepts like the multiverse.

This is probably why other than his own universe, Doctor Strange only visits a couple of others. Yet, not to worry, since a third movie in his trilogy is all but inevitable, as teased in the slightly hammy end credits scene by the introduction of Charlize Theron’s Thea.

Similarly, some fans may have expected more outlandish cameos that were rumoured like Ryan Reynolds’ Deadpool, Nicolas Cage’s Ghost Rider, Tobey Maguire’s Spider-Man or even a Tom Cruise Iron Man. Just give it time. Considering how wild Marvel have gone with this, we no doubt expect plenty more where that came from in the MCU’s future.

Doctor Strange in the Multiverse of Madness is out now in UK cinemas.