In this Netflix family movie, based on a true story, a yellow Lab disappears on the Appalachian Trail, and Rob Lowe is tasked with finding him. 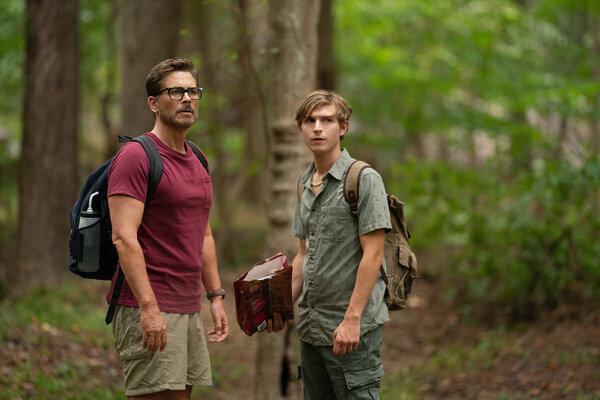 “Dog Gone,” a family flick that offers as much nutrition as a rubber bone, follows the true-life misadventures of a yellow Lab named Gonker in the 1990s. Adopted by a bohemian college senior, Fielding Marshall (Johnny Berchtold), whose irresponsibility is telegraphed by a wardrobe of tie-dye shirts and an accusation that he reeks of patchouli, the pup spends his youth lapping from beer bongs before he’s haplessly unleashed on the Appalachian Trail and disappears.

The dramatic conceit is that this is a tale about two lost souls: the slacker, who begrudgingly comes to respect his uptight father (Rob Lowe) as they walk the trail handing out missing-dog fliers, and the dog, whom the veteran director Stephen Herek (“Bill & Ted’s Excellent Adventure”) films tiptoeing through the woods under rumbling storm clouds. Give the dog a wig of blond ringlets and he could do a passable lampoon of Lillian Gish.

Nick Santora’s screenplay is a loose adaptation of the author Pauls Toutonghi’s nonfiction account of the 1998 search. (Toutonghi married into the Marshall family, making Gonker his pet-in-law.) The film makes an unconvincing attempt to update its quest to the present. Fielding and his ’90s peers are reconfigured into anticapitalist mouthpieces for Gen Z; his mother (Kimberly Williams-Paisley) endures a patronizing arc about learning to use the internet while suffering clumsy flashbacks to her childhood Akita.

Even viewers with a tolerance for this kind of saccharine cinema — oversaturated green grass, slow-motion sprinting, kindly biker gangs, and a fleeting bar squabble in which the nastiest insult is “Idiot!” — will likely say their favorite part is the end credits, which feature photos of the cast and crew members with their own dogs (and, yes, three cats).