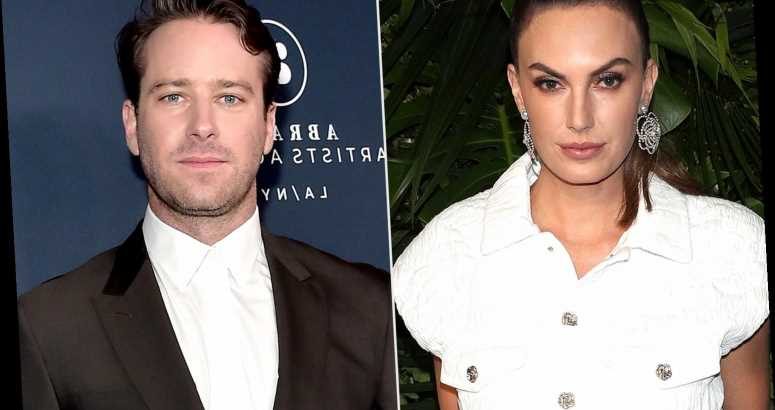 Elizabeth Chambers has been focusing on herself and her children as her estranged husband, Armie Hammer, faces a rape allegation.

Chambers, who filed for divorce from Hammer in July of last year, answered a question from a fan on her Instagram Story about her quieter presence on social media in the last few weeks.

"A lot I've wanted to share, but hasn't felt right [at the moment]," Chambers added, seemingly referring to the allegations against Hammer that surfaced last month.

After months of swirling accusations and rumors about the Call Me By Your Name actor, a woman named Effie, who has not publicly revealed her last name, came forward publicly to accuse Hammer of rape last month.

Appearing in a press conference with attorney Gloria Allred on March 18, Effie — the woman behind the Instagram account House of Effie that first anonymously shared allegations against Hammer —accused him of sexual assault in a four-hour incident that she says occurred in 2017.

Effie further accused Hammer of "mentally, emotionally and sexually" abusing her during their on-and-off four-year relationship. At the time of their affair, Hammer was married to Chambers.

Hours after the press conference, a spokesperson for the LAPD confirmed Hammer is the suspect in an investigation opened on Feb. 3.

In a statement previously provided to PEOPLE, Hammer's lawyer Andrew Brettler denied the rape allegation and maintained that the actor's relationship with Effie was "completely consensual, discussed and agreed upon in advance, and mutually participatory." Weeks before Effie's allegations, Chambers commented on the rumors about Hammer, including affairs during their time together, in an Instagram post.

"For weeks, I've been trying to process everything that has transpired. I am shocked, heartbroken, and devastated. Heartbreak aside, I am listening, and will continue to listen and educate myself on these delicate matters. I didn't realize how much I didn't know," Chambers wrote.

"I support any victim of assault or abuse and urge anyone who has experienced this pain to seek the help she or he needs to heal," she continued. "At this time, I will not be commenting further on this matter."

"My sole focus and attention will continue to be on our children, on my work and on healing during this incredibly difficult time," she added. "Thank you for all of the love and support, and thank you in advance for your continued kindness, respect, and consideration for our children and me as we find ways to move forward."

If you or someone you know has been sexually assaulted, please contact the National Sexual Assault Hotline at 1-800-656-HOPE (4673) or go to rainn.org.

If you or someone you know has been a victim of sexual abuse, text "STRENGTH" to the Crisis Text Line at 741-741 to be connected to a certified crisis counselor.