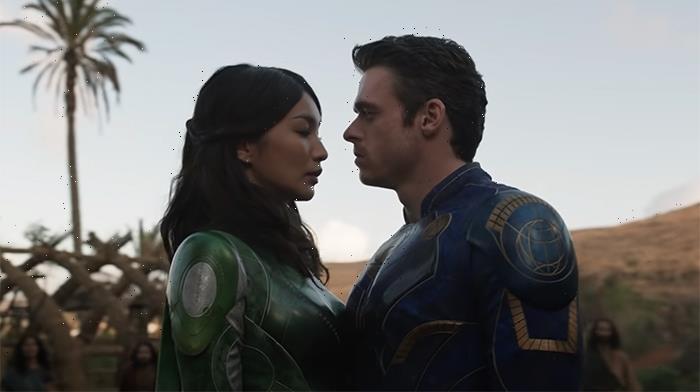 Eternals is sneakily one of Marvel’s most exciting projects currently on the docket (as “sneaky” as any $200 million blockbuster with the full might of Disney behind it can be, anyway), with a truly ensemble cast of superheroes unlike any other seen in the MCU before. It doesn’t hurt that director Chloé Zhao is calling the shots this time around, bringing all her instincts and filmmaking ability that led to such acclaimed efforts such as The Rider and the 2021 Best Picture winner, Nomadland. That includes bringing a “nuanced female superhero” into the equation by way of Gemma Chan‘s Eternals character.

Gemma Chan (Crazy Rich Asians) has seen her demand rise in recent years, to the extent that her turn in Eternals will actually mark the second time she’s been cast to portray a character in the Marvel Cinematic Universe — she also played Minn-Erva in 2019’s Captain Marvel. It’s her portrayal of Sersi in Eternals, however, that should give everyone plenty of reason to look forward to this movie. Take it straight from Chloé Zhao herself, as she told Vogue UK (via IndieWire):

“It has always been a passion for me to create a nuanced female superhero that is rarely seen in this genre. Gemma was very interested in this idea as well and took on the challenge. She is a great actress. Very intelligent and brave. She brought a beautiful sense of gentleness, compassion and vulnerability to Sersi that I believe will invite viewers to rethink what it means to be heroic.”

While superhero movies in general, and Marvel in particular, have been rushing to catch up with current standards, attempting to feature multiple examples of well-written and complex heroes who happen to be women, it’s clear there’s still plenty of work left to do. There’s more than enough room for writers to have multiple women carve out their own spaces and exist as full-fledged characters in their own right, which Zhao and Gemma Chan seem intent on delivering with Eternals. Chan goes a step further in describing what Sersi brings to the table:

“Sersi is not your typical superhero: she’s not necessarily the best fighter, she doesn’t have the most obviously impressive powers. The main thing is she’s an empath. She has a connection with humans, and with the world and the earth. That is her strength, so I leant into that.”

With full awareness that I’m just a dude saying these things, Gemma Chan’s quote taps into something I strongly believe should be the rule rather than the exception. Characters played by women shouldn’t necessarily have to be written as paragons of virtue, unable to make mistakes or to be normal, flawed individuals in ways that are afforded to every other character in existence. Chan seems to describe Sersi as someone who isn’t the best at everything, but simply has specific characteristics that play to the character’s unique strengths. In other words, Zhao and Chan don’t seem to be interested in making this one superhero uphold the pressures of everything that comes with the experience of being a woman. She’s just…a person, and I love that approach.

Eternals will open up in theaters on November 5, 2021.