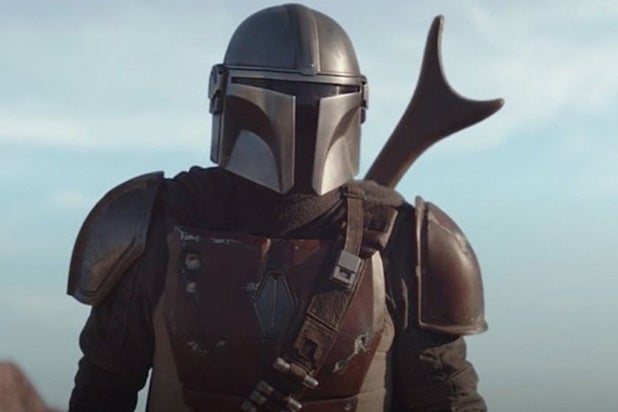 Lucasfilm president Kathleen Kennedy delivered a huge update on the future of the “Star Wars” franchise on both the big and small screens during Disney’s marathon investor day presentation last week. Among the goodies revealed: 10 planned new series and the announcement of an acclaimed action director for the upcoming “Rogue Squadron.”

In addition to updates on existing projects like the Disney+ hit “The Mandalorian” and the Ewan McGregor-led series “Obi-Wan Kenobi,” Kennedy also unveiled plans for several new projects including Patty Jenkins’ “Rogue Squadron,” two new “Mando” spinoffs from Jon Favreau and a series of shorts from Japanese anime directors headed to Disney+.

In total, the company said it expects to roll out 10 “Star Wars” series on the streaming service in the coming years, with development on many of the projects already underway. That’s on top of the three “Star Wars” movies currently sitting on the studio’s theatrical release calendar.

Here is a list of everything we know is in the “Star Wars” pipeline, and for a full list of what was announced on Thursday, click here.

“Rangers of the New Republic”

One of the two spinoffs announced Thursday is the live-action “Rangers of the New Republic” from “The Mandalorian” creator Jon Favreau and executive producer Dave Filoni. Kennedy said the series will be set “within the timeline” of “The Mandalorian” but shared few other details. Much of the fan speculation online centers around the character of Cara Dune, played by Gina Carano on the flagship series.

A fixture in the “Star Wars” universe since “Clone Wars,” Ahsoka Tano made her debut on “The Mandalorian” on Season 2 of the Disney+ series earlier this year, played by Rosario Dawson. The character is now set for her second “Star Wars” series — after the animated “Clone Wars” series — with a story written by Filoni. 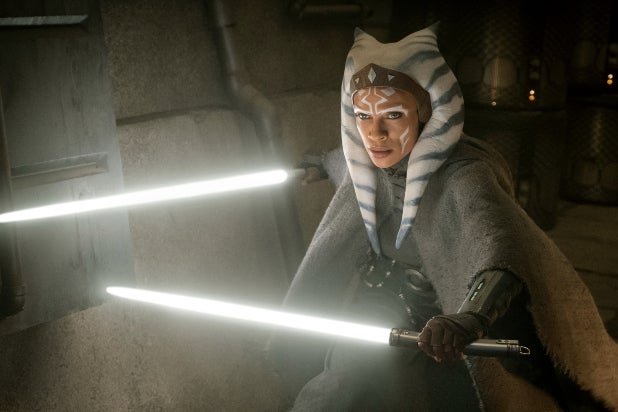 In addition to the two spinoffs, fans will also get a third installment of “The Mandalorian” around Christmas 2021, Kennedy said. The three shows will exist inter-connectedly and eventually culminate in “a climactic story event.” Kennedy gave no further details about the crossover, though she did seem to suggest that other “Star Wars” titles may have a potential role in the event.

Like Ahsoka, Lucasfilm and Disney are giving Cassian Andor, another fan-favorite character, his own spinoff series coming to Disney+ in 2022. The series from “Bourne” writer Tony Gilroy is described as a spy thriller centered on Diego Luna’s character from “Rogue One.” Set between the events of the prequel trilogy and “Rogue One,” the series will see Luna reprise his role alongside Stellan Skarsgard, Adria Arjona, Fiona Shaw, Denise Gough, Kyle Soller and Genevieve O’Reilly as Mon Mothma. Production on the series is currently underway in London.

As previously announced, Ewan McGregor will make his return to the “Star Wars” franchise for the upcoming Disney+ series “Obi-Wan Kenobi.” Set 10 years after the events of “Revenge of the Sith,” the six-episode miniseries will explore the legendary Jedi’s life in the wake of his greatest defeat, the downfall and corruption of his best friend and Jedi apprentice, Anakin Skywalker, a.k.a. Darth Vader. Kennedy confirmed Thursday that Hayden Christensen (who was famously lambasted for his performance in George Lucas’ prequels) will also return for the series. “The Mandalorian” vet Deborah Chow will direct, with production set to begin in March 2021.

The animated “Clone Wars” series concluded its arc with a 12-episode final season earlier this year, but Lucasfilm will expand its animation efforts with a new spinoff titled “The Bad Batch.” The series will center on the “specialist commandos” of Clone Force 99, the “unique squad of clones who vary genetically from their brothers in the Clone Army” that was first introduced in “The Clone Wars.”

Another future Disney+ series, “Star Wars: Visions,” will bring Japanese animation to the “Star Wars” universe with a set of 10 short films from the country’s leading anime studios. Few details were provided about the project, but Kennedy touted the 2021 series’ “fresh and diverse cultural perspective.”

Lucasfilm’s animation division will team up with the acclaimed visual effects team Industrial Light & Magic for what is being described as “a special ‘Star Wars’ adventure” headed for Disney+. It is unclear what format “A Droid Story” will take, but Kennedy said the project will center on “a new hero” being guided by R2-D2 and C-3PO on a special mission.

“Star Wars” has often been criticized for its lack of racial diversity, but Lucasfilm is looking to change that reputation in the coming years. “Dear White People” creator Justin Simien has been tapped to develop an “event series” that will finally give the character of Lando Calrissian — memorably played by Billy Dee Williams in the original films and Donald Glover in Ron Howard’s “Solo” prequel — his own story. It remains unclear when the series will take place or who will play the title role.

Leslye Headland, creator of Netflix’s acclaimed “Russian Doll,” will get her own shot at a “Star Wars” story with the upcoming mystery-thriller series “The Acolyte.” Set in “the final days of the High Republic era,” a period roughly 200 years before the events of “The Phantom Menace,” the series will “take the audience into a galaxy of shadowy secrets and emerging dark side powers.” Beginning next year, Lucasfilm will also release a series of comics and novels that will explore the same period.

Thursday’s presentation was relatively light on news about the film side of the “Star Wars” franchise, but Kennedy did make one huge announcement: “Wonder Woman” director Patty Jenkins will become the first woman to helm a “Star Wars” feature with the upcoming “Rogue Squadron,” set for release in theaters Christmas 2023. The movie will “introduce a new generation of starfighter pilots as they earn their wings and risk their lives in a boundary-pushing, high-speed thrill-ride,” telling a story Jenkins said she felt personally connected to as the daughter of a fighter pilot. It is the first of three new “Star Wars” films on Disney’s release calendar.

Kennedy said Thursday that “Thor: Ragnarok” director Taika Waititi is currently scripting his “Star Wars” feature, which will presumably take one of the other two slots on the calendar — currently set for 2025 and 2027. “Taika’s approach to Star Wars will be fresh, unexpected, and unique,” Kennedy said. “His enormous talent and sense of humor will ensure that audiences are in for an unforgettable ride.”

It’s no secret that Lucasfilm’s plans for the big-screen future of the “Star Wars” franchise seem to have shifted after the conclusion of the most recent film trilogy with “Rise of Skywalker.” In a 2019 radio interview, Disney’s then-CEO Bob Iger — who opened Thursday’s presentation and currently serves as chairman — famously said he believed the company “made and released too many [‘Star Wars’] films over a short period of time.”

At least one major project that was previously in development has been scrapped, and Kennedy provided no new update on the planned trilogy from “Knives Out” director Rian Johnson. Kennedy was similarly mum on films in development from Marvel boss Kevin Feige and “Sleight” director J.D. Dillard.