Along with casting controversies, Fantastic Beasts: The Crimes of Grindelwald has been somewhat overshadowed by how it addresses Albus Dumbledore’s sexuality.

While we all know that the future Hogwarts headmaster is canonically gay, the signs have been mixed about whether the second Fantastic Beasts movie will clearly show it.

Director David Yates initially said that Dumbledore’s relationship with Gellert Grindelwald will be implicit, before backtracking somewhat by saying it will be “clear in what you see”.

Star Ezra Miller, who plays Credence Barebone in the movie, has now addressed the controversy, assuring fans that the portrayal of Dumbledore’s sexuality is very “explicit”.

“It’s a funny idea to me that every form of representation has to look the same,” he told Total Film. “For me, personally, I find Dumbledore’s queerness extremely explicit in this film. I mean, all around.

“He sees Grindelwald, his young lover who’s the love of his life; he sees him in the Mirror of Erised. What does the Mirror of Erised show you? Nothing more than the most desperate desire of your heart. If that’s not explicitly gay, I don’t know what is. 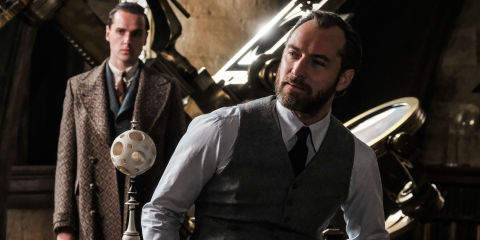 “I think it’s also really powerful to have characters who are fascinating, dynamic people, doing magical works in the world, and that the story does not only pertain to their sexuality.”

Miller also hit back at those judging the movie’s representation before actually seeing it, continuing: “Why don’t you wait until you see the film before you start talking shit on Twitter? Or wait to make up your own mind about something for once in your life.

“Do your own research. Make up your own mind. Follow your heart, and really, really investigate situations before you identify yourself and pick a side, and start throwing things at the opposition.

“Because that’s what’s totally screwing everything up right now. And it polarizes us. We’re all human, and there’s a lot of things we can agree on.”

Fantastic Beasts: The Crimes of Grindelwald is set for release on November 16.