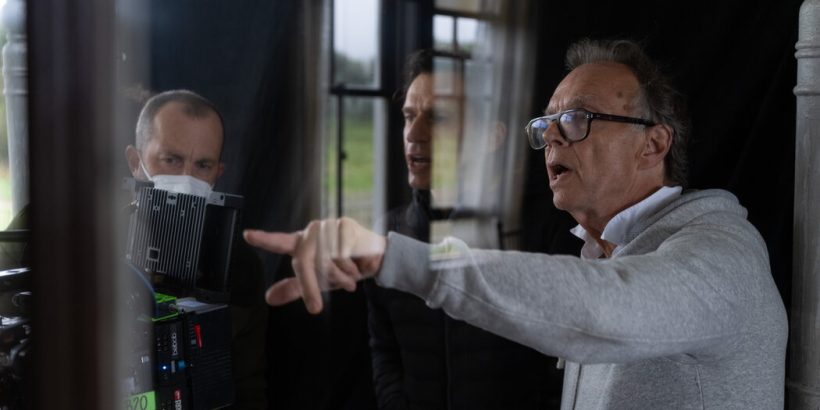 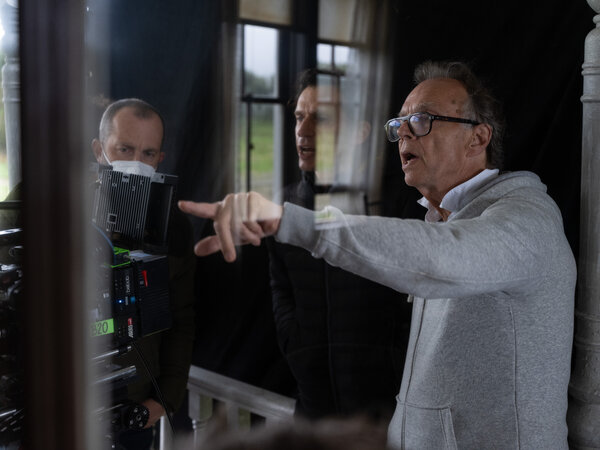 Jessica Lange, Ed Harris and Jonathan Kent, the director of the forthcoming film version of Eugene O’Neill’s “Long Day’s Journey Into Night,” were standing in a rehearsal room here in early November, listlessly running through lines. Harris, playing James Tyrone, an aging former matinee idol, touched his toes and did squats as he spoke, while Lange, playing his fragile, morphine-addicted wife, Mary, flitted distractedly around the room.

Producers and assistants, phones glued to ears, bustled in and out, anxiously monitoring the stormy weather that prevented the cast and crew from heading to the set: a house modeled on the Monte Cristo Cottage in Connecticut, the seaside home of O’Neill’s family that provides the setting of this autobiographical play.

The go-ahead came several hours later. The shoot finished close to midnight as Kent and the cast tried to push through the day’s packed schedule.

It wasn’t the first storm the production had weathered, literally and metaphorically. One day after filming began on Sept. 19, the lead producer, Gabrielle Tana, discovered that their biggest chunk of financing had fallen through. “I had to go to the set and tell them we were shutting down,” she said.

Tana (whose credits include “Thirteen Lives” and “The Dig”) said it was one of the worst moments of her long career. “I let them know I wasn’t giving up, and was already in conversations with investors,” she said.

During the nail-biting weeks that followed, she spent endless hours in meetings trying to drum up the money. Remarkably, the cast — including Ben Foster and Colin Morgan, playing the Tyrone sons — as well as most of the crew and production team, never wavered in their commitment to the project. A handful of staff members, including the director of photography and some production design workers, weren’t able to stay with the production. The rest waited it out in this coastal region about an hour south of Dublin.

The Oscars aren’t until March, but the campaigns have begun. Kyle Buchanan is covering the films, personalities and events along the way.

“We were shocked at first, of course,” said Lange, who played Mary Tyrone in 2000 in London, and won a Tony Award for the role in a production directed by Kent that transferred from the West End to Broadway in 2016. “But never once did we think it wasn’t going to happen. We just hung in, went to the pub, took long walks. We really became friends and cared deeply for one another, because we were going through the same thing.” She added, “I think that in some way it added to our intensity and passion for doing this.”

Three weeks of waiting to restart, Harris said, allowed him “to sit back, think about the character, calm down, and just be this dude rather than worrying about playing such a classic, important role.”

The actors also made calls. Foster made a connection to the British theater producer Bill Kenwright, who had worked with Lange on productions of “Long Day’s Journey,” “A Streetcar Named Desire” and “The Glass Menagerie” in the West End and on Broadway.

“I knew we would figure it out,” Foster said. “If we had to do it as a sock puppet show, we’d do that till we raised the money.”

The sock puppet show was averted; Kenwright came through. “He was our knight in shining armor,” Tana said. A few other knights had to be found too, including the Russian film producer Gleb Fetisov.

First adapted for the screen in 1962, “Long Day’s Journey” is Kent’s debut feature. “This is, probably, the greatest American play, the invention of the dysfunctional family drama, and when you do it in the theater, there is a sort of reverence from the audience,” Kent said. “I thought that perhaps with film, one could shred that reverence a bit and allow its rawness and immediacy through.”

Then he factored in current events that coincided, like the opioid epidemic and the coronavirus lockdown. “Here are these four, addicted not just to drugs and alcohol, but to each other, endlessly going over the past, the missed opportunities and failure, trapped in a house by the sea,” he said. “Somehow it felt resonant.”

Lange said that she and Kent first talked about a film version during the Broadway run. “I immediately thought, yes!” she said, adding that Mary Tyrone “gets under your skin like no other character I have ever played; you never come to the end of it. And because of the nature of filmmaking, there is so much more subtlety that can be brought to light: the expression in the eyes, the subtle shift in the voice.”

Tana first heard about the idea when the actor Ralph Fiennes, a friend of Kent’s, asked her to help with the project, which is scheduled for release this fall. She was intrigued and engaged the Pulitzer Prize-winning playwright David Lindsay-Abaire — his “Good People” had been directed by Kent — to adapt the drama, which needed to shrink from an almost-four-hour theatrical event to an under-two-hour film.

“There was never an agenda of ‘Let’s improve this,’” Lindsay-Abaire said in a video call from New York, adding that there isn’t a word of text in the film that wasn’t written by O’Neill. “It was the opposite: Let’s maintain what we love while telling the story in a different medium. It wasn’t using a machete as much as a scalpel. We took the dramatic Hippocratic oath: Do no harm to O’Neill!”

Film, he pointed out, has communication tools that the stage doesn’t have. “You can sometimes replace four lines with a close-up,” he said. “We kept asking, does the character need to say that, or can they just act it?” He and Kent also discussed ways to make the drama more cinematic, by withholding some information that O’Neill reveals early. “Ghosts, hauntings, what is Mary doing up there? We wanted to lean into some mystery, to hint at things and reveal them more slowly,” Lindsay-Abaire said.

Gabriel Byrne, who had starred opposite Lange onstage, was slated to reprise the role, but he fell out due to scheduling conflicts. Tana emailed Ed Harris, who had appeared with Lange in the movie “Sweet Dreams” almost 40 years earlier. He said yes immediately. “As tough as it was when the money fell out, it was the most rewarding film acting experience I’ve had in quite a while,” Harris said. Kent, he added, “gave us the freedom to just be those people — that it wasn’t a sacred text, that this was about human beings, not a dried-up historical piece.”

Kent said that he had considered updating the 1912 setting, but had decided that too many fundamental details would have to be altered. Still, “to the designer’s chagrin, I asked that the costumes not be too ‘period,’” he said. “Whatever the setting, the text makes it a living, contemporary thing.”

Two weeks of rehearsal before the start of the shoot allowed the four main actors to begin to build a family dynamic. “I immediately fell head over heels for my parents,” Foster said, adding that he had brought some foraged greenery from the actual Monte Cristo cottage as a talisman.

“The rehearsal time was all about finding out what might work for character,” Morgan said. “A director who isn’t as theater-versed as Jonathan might work out camera angles first, then what the character does within. But I think the best directors work so that the camera is actor-led, and that’s how Jonathan approached it.”

Then, almost immediately, came the hiatus and a roller coaster of emotions. “The bonding of that time was actually wonderful,” Foster said. “Historically I don’t socialize a lot with fellow actors. But in this case, it really did become a family.”

The difficulty of making the film, Tana said, is indicative of the changing cinematic landscape. “It’s really hard now to make this kind of literary, straightforward, old-school independent movie,” she said. “There is so much value to this: these great, great actors doing a great American play that every kid studying literature will be able to watch. But it’s a sea change moment in our field in the way we access content, how it is monetized, where the resources are.”

Kent agreed that the film goes against the current grain, but added: “We all have mothers, fathers, our terrible sense of failures and disappointments and guilt. I think what we crave from film or theater is truth about our human experience. There is an audience for that.”