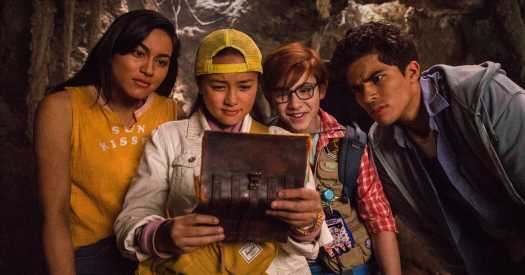 The Hawaiian term ohana, which means family, may be most recognized from its popularization by the Disney animated film “Lilo and Stitch.” Like that alien-populated coming-of-age comedy, the Netflix film “Finding Ohana” uncovers adventure in the midst of familial dysfunction. But the treasure-hunting escapade at the center of this film weakens a more compelling look at the dynamics of a family and the uncertain future of its cultural legacy.

Frequently at odds, the gregarious Pili (Kea Peahu) and her cooler-than-thou brother Ioane (Alex Aiono) are none too happy to be uprooted from their Brooklyn lives. Their widowed mother, Leilani (Kelly Hu), moves them to her Wi-Fi-free childhood home on Oahu to take care of her father (Branscombe Richmond). Restless in their new surroundings, the teens (along with their new friends) occupy their time by chasing after an ancient treasure hidden in a cave on the island.

A Gen Z crusade, hyper-aware of its Indiana Jonesian influences, is an entertaining conceit. But the plodding pace of Jude Weng’s film, along with its shabby dialogue, distracts from the more emotionally intricate subplot of the mother returning home to her father after her husband’s death. Implied here is a more tangible sense of grief, not only in terms of a lost loved one, but also a now disparate connection to one’s heritage and family history.

This consideration of how to preserve cultural identity and meaning through future generations is most eloquent at its least talkative; neither the script (which overexplains Hawaiian colloquialisms) nor the younger actors can handle the weight of these ideas. But Hu and Richmond convey a tender and bruised relationship, one that emphasizes learning how to move forward and live on.