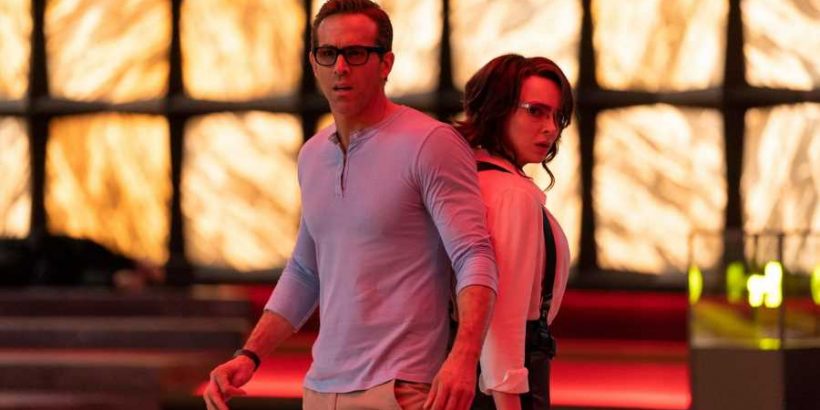 They’re called “non-playable characters,” or NPCs for short. If you’ve played an RPG (Role-Playing Game; think Grand Theft Auto or Red Dead Redemption), then you know who they are: the generic everyday folks you see walking down the street when you, the person sitting in front of your computer or behind your PS4, are ripping shit up during gameplay. They are the people you jostle in the street when you’re running toward a save point, the pedestrians you hit while cops chase you during a mission, the casualties when you decide to play sociopathic sniper on a whim, the pixelated collateral damage of your escapism. They’re just there in the background, repeating phrases (“Hey, watch it!” “I’ve got to get to work!”), milling about. But what if these NPCs had hopes, fears, ambitions? What if they had a soul? Or at least, you know, looked like a Canadian movie star and had a name?

'Killing Eve': How Jodie Comer Turned a Pink-Dressed Psychopath Into a Breakout Role

The non-playable zero-to-hero of Free Guy doesn’t really have a name — he’s just Guy, and then, once he becomes an in-game and then international sensation, Blue Shirt Guy. Every day, the eternally optimistic Guy goes to his job at the bank in the popular online game Free City, telling other NPCs “don’t just have a good day…have a great day!” He and his buddy, a security guard named Buddy (Lil Rey Howery), banter in between the heist missions that happen every half hour or so. But Guy does resemble Ryan Reynolds, so you know he is destined for smarmy line readings and greatness. He’s about to meet the woman of his dreams, a Lara Croft-level avatar known as MolotovGirl (Jodie Comer). And, once Guy goes full Rowdy Roddy Piper by borrowing a player’s glasses, which allow him to see his environment for what it really is — i.e. a violent hellscape where people run rampant, rack up points at others’ expense, respawn and repeat — he will achieve self-awareness, try to make his fictional world a better place and attempt to get the girl, not necessarily in that order.

At this point, a moviegoer may grab the glasses from a studio executive, slip them on, and see the world around them as the suits see it, as a host of floating dollar signs revolving around a giant handsome, grinning face while various intellectual properties pop and ping in the background. You could say Free Guy is about gaming culture, which it gets better than most movies involving video games, but has little to say about it other than people are horrible online and the person behind that musclebound biker avatar is likely a 10-year-old moppet or a mouthbreather living in his mom’s basement. It operates on the high-concept notion of a non-playable character experiencing an existential crises, but only as a delivery system for your standard, steroidal blockbuster.

There’s a subplot about MolotovGirl’s real-world identity, a programmer named Millie who, along with her partner Keys (Stranger Things‘ Joe Keery), developed a Sims-style indie game. Except they sold it to the corporate gaming juggernaut Soonami, whose CEO (Taika Waititi) stole the engine for Free City. Millie is trying to sue the company; she thinks there’s a video clip embedded inside the game that will prove her case, hence her alter ego trying to infiltrate a guarded fortress. As for Keys, he now works for Soonami, and wrestles with having watched their labor of love get stripped for parts so he could get a paycheck. But this movie isn’t interested in taking on the corporate raiding of creatives. Far from it.

No, what Free Guy is really about is star power: In a truth-in-advertising world, this would be called Reynolds Player One. We now operate in an entertainment ecosphere of intellectual properties which begat endless franchises, which begat spin-off series, which begat side movies and multiverses and crossovers and origin-story prequels and must-see streaming events. Ryan Reynolds knows this; just ask his merc with a mouth. But there are few actual movie stars left standing, and Reynolds is one of them. The 45-year-old actor is an alchemist, able to transform what could come off as an inherent sense of entitled douchebaggery into an overwhelming sense of charm, in-on-the-joke complicity and screen charisma. Even without the matinee-idol good looks, there’s a sky-high watchability factor around him, a prankster-next-door persona he brings to parts. That, and a sort of boundless, infectious energy without the usual comedian’s edge. Reynolds is like a puppy dog who moonlights as a male model, or maybe vice versa.

He’s the only reason to see Free Guy, but you already know this going in. Nothing against Comer, as the Killing Eve star is more than able to hold her own against the star. Or Howery, doing his usual solid supporting-player work. Or Keery, or Freestyle Love Supreme MVP Utkarsh Ambudkar (playing a Soonami suck-up), or Taika Waititi, who gives his CEO the same villainous-stinker vibe that he gave Hitler in Jojo Rabbit. (The performance makes you wonder if, in lieu of lines, the script actually read, “And here, Taika just, y’know, does his thing….”) Director Shawn Levy, his resume includes a Pink Panther reboot, the Night at the Museum movies and Stranger Things, does his usual journeyman’s job. It’s just that Reynolds is holding this entire movie up on his protein-shake shoulders, amping up his comically guileless line readings and trying to add as much action-hero mojo as humanly possible. If you also need him to fight a beefed-up, braindead version of himself, all the better. This is what you hire him for. We don’t have a great movie, you can feel him saying. But let’s at least try to have a good one.

Because if you’re not just here to see Reynolds do his thing, good luck. Free Guy is what the kids like to call one truly conflicted text. This is a movie that preaches free will and being active in taking your own path in life, yet demands you remain a passive consumer of its thrills, spills etc. It’s a blockbuster that says the little guy has to stand up to the big guy, delivered by a studio who swallowed up the original studio as part of one of the most monopolistic corporate showbiz acquisitions ever. Free Guy has a character bemoan the fact that nobody makes anything original anymore, and has its villain declare that all his sheeple customers want are sequels and brand-name franchises while twirling his mustache — then brings in two extremely recognizable totems from two massive intellectual properties owned by Disney for the big climax because hey, it can, so why not. (Move over, Space Jam, there’s a new I.P. flex in town.) If nothing else, this movie reminds you that nothing in life is truly free. You’re just paying for things in ways you may not even realize yet.