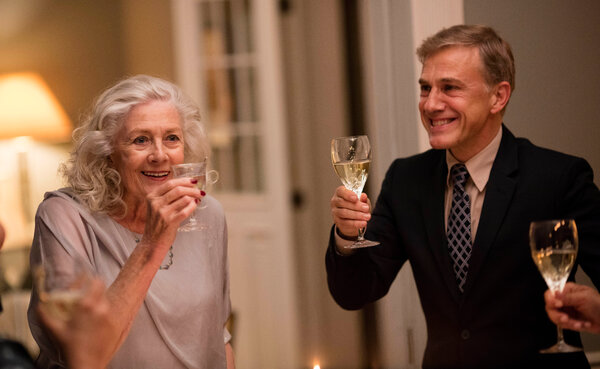 Christoph Waltz is a magnificent actor, and in “Georgetown,” as in everything, he is a pleasure to watch. As Ulrich Mott, a smooth-talking, uxorious grifter and social climber who wheedles his way into Washington society with the aid of his well-connected nonagenarian wife, Waltz flamboyantly charms and flatters, wearing a wolfish smile as he lies through his teeth.

Mott is based on Albrecht Muth, the famous liar and cheat who was convicted of the 2011 murder of his wife, and Waltz plays him as an oily, hot-tempered sociopath on a direct path from fibbing to frenzy. He makes you understand how a man who could so easily lie might, in the right circumstances, just as easily kill.

Waltz’s most memorable performances have come under the direction of auteurs such as Alexander Payne and Quentin Tarantino. In “Georgetown,” he directs himself, and he is hindered by his limitations as a filmmaker. Although there are flashes of stylistic ambition, including a confident tracking shot near the beginning of the film reminiscent of Brian De Palma, on the whole the action feels stilted and the drama insubstantial. The great Vanessa Redgrave, as Mott’s ill-fated wife, and Annette Bening, as her suspicious daughter, are both excellent — perhaps a testament to the director’s skill with fellow actors. But the cast can only do so much with thin material, and Waltz, duping and swindling grandly, isn’t equipped to make the long con interesting.

Georgetown
Rated R for strong language and some domestic violence. Running time: 1 hour 39 minutes. In theaters and available to rent or buy on Google Play, FandangoNow and other streaming platforms and pay TV operators. Please consult the guidelines outlined by the Centers for Disease Control and Prevention before watching movies inside theaters.