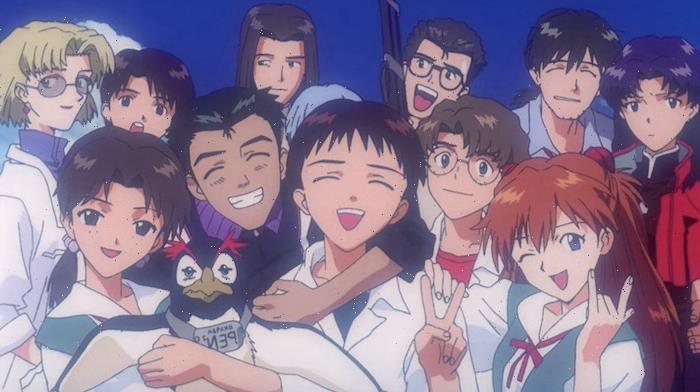 If there are more than 5,000 stateside Evangelion fans reading this (and you also happen to be Blu-ray collectors), then some of you may want to stop what you are doing and gather your financial resources. The full Neon Genesis Evangelion TV series, along with the movies Evangelion: Death (True)2 and The End of Evangelion, are coming to Blu-ray in North America for the first time.

The Neon Genesis Evangelion: Ultimate Edition set is sure to have fans chomping at the bit, perhaps even salivating in the manner of a feral Eva unit. The only catch is that there is a very limited run with this thing: only 5,000 copies. It will be sold exclusively through the online store of distributor GKIDS (with a limit of 1 per customer). Presently, it’s available for pre-order at GKIDS.com/Evangelion. Let’s just hope that by the time you read this, the thing’s not already sold out.

For UK fans, the Ultimate Edition set is distributed by Anime Ltd. The official press release contains the information link evangelion.alltheanime.com and notes that you “can look forward to August 30th, 2021, for information on forthcoming editions.”

So what precisely is included in this set? Well, let’s break it down like an Eva going into berserker mode.

The NEON GENESIS EVANGELION: Ultimate Edition was created by fans as the definitive celebration of one of the most important and influential anime series of all time, featuring exclusive artwork, merch, a 156-page book, and over 7 hours of bonus features. Spread over 11 discs, this set contains the Official Dub and Subtitled versions, and bonus Classic Dub and Subtitled versions.

You may recognize some of the cover art up above from the old Evangelion DVD covers. However, it includes some new renderings of Asuka and Rei that were previously only featured on the Japanese LaserDisc releases.

The “merch” it’s referring to there, by the way, consists of eleven double-sided 12-inch-square artboards, a paperweight modeled on Sachiel, the 3rd Angel, and a NERV ID card with a lanyard.

The Evangelion TV series, coupled with the films Evangelion: Death (True)2 and The End of Evangelion, came to Netflix two years ago. That gave us an opportunity to revisit them and explore their themes.

In terms of just the viewing experience, some purists were upset that they could not stream the original dubs and subs on Netflix. It sounds like the Ultimate Edition Blu-ray set is here to allay those concerns. Via the press release:

With the way Netflix works, there’s no telling when Evangelion might disappear from its streaming library. This set offers fans the chance to own a piece of Evangelion on physical media.

The announcement of the Neon Genesis Evangelion: Ultimate Edition Blu-ray set directly follows the conclusion of the Rebuild of Evangelion film tetralogy on Amazon Prime. We just did a spoiler review of the final Rebuild movie, Evangelion: 3.0+1.0: Thrice Upon a Time, this week. If that movie got you in the Evangelion mood again, then you might want to snatch up your copy of the Ultimate Edition set before it’s too late.

Now, if we could just manage to wrangle an iTunes release for Evangelion out of GKIDS, I’d be all set. A guy can dream, can’t he?