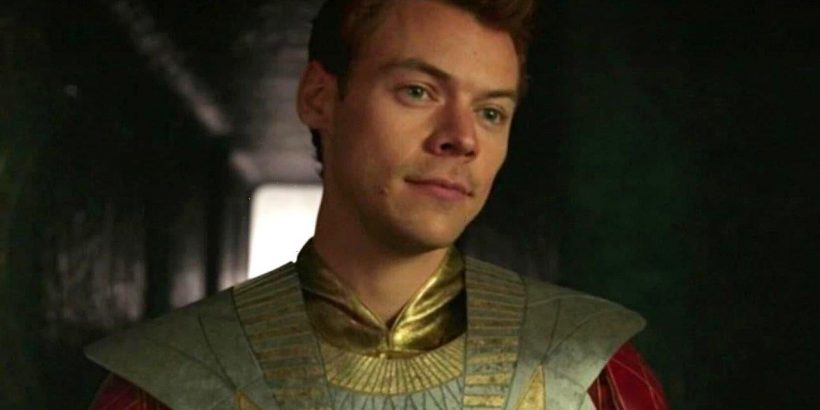 Having portrayed Eros at the end of 2021’s ‘The Eternals’, the ‘Watermelon Sugar’ hitmaker is said to have been in talks with executives to continue taking on the character also known as Thanos’ brother.

AceShowbiz –Harry Styles has reportedly signed a five film deal with Marvel Studios worth $100 million to play Eternal’s character Eros. Having portrayed the same character at the end of 2021’s The “Eternals“, the former One Director singer was said to have been in talks with executives to continue taking on Thanos’ brother, who is also known as Starfox.

On Friday night, July 29, sources in Los Angeles told The Sun that the studio is optioning Harry for “as many as five projects.” Marvel Studios president Kevin Feige confirmed Harry will feature in a movie alongside Eternals’ Pip the Troll at 2022’s Comic Con in San Diego. He has also has revealed plans are already in place for two new phases of franchises and spin-offs of the comic book world.

An L.A. film consultant told The Sun, “Harry was in Marvel’s sights for the last 18 months. Not only is he the biggest pop star of the moment, his star is so huge it transcends just film and music. Harry has the midas touch and will be a huge deal bringing in different demographics and showing older comic book fans his talent. For Harry and his handlers, it was all about whether the project and the feel of the movie being right.”

“Following several secret calls and discussions the deal has been struck,” the consultant added. “And the surprise is that their deals pave the way for Harry to do as many as five projects for Marvel, which could see him as Starfox for 15 years. Feige and his team are delighted with the development. With his two new movies out this year, the talk is that Harry will become one of Hollywood’s most in demand leading men.”

“And certainly for Harry the deal is enormous. Certainly the money on the table for him to appear in a Starfox solo film would be astronomical – pun intended. And of course with each film, the wages rise, the source continued. “So should he keep playing the role for five projects, it is no understatement to say he could be looking at £40 million and higher for a long term run.”

“Nowadays leading stars in these films get profit-share percentages too, the way that these Marvel films have performed and the loyal fan base that Harry commands, we are talking about very significant income figures.”

The casting news came after Harry’s film “Don’t Worry Darling“, on the set of which he found love with director Olivia Wilde, is set to premiere at the Venice Film Festival in September. His romantic drama “My Policeman” is also set for a world premiere at the Toronto Film Festival that same month.