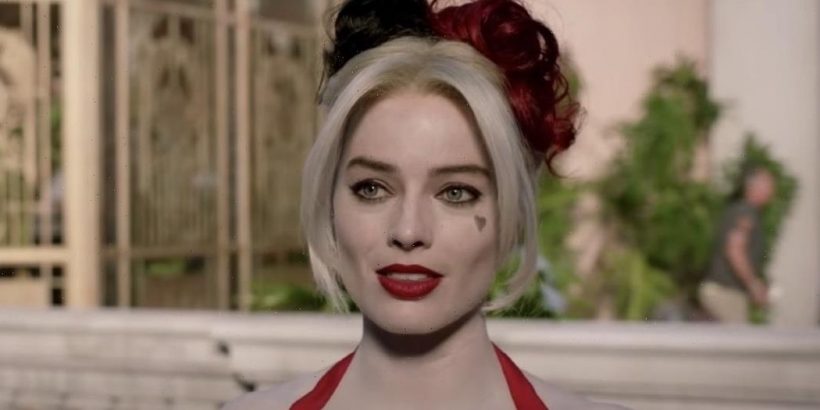 When Jared Leto’s Joker showed up earlier this year in Zack Snyder’s Justice League, he was missing his face tattoo. You know, the one that left his chrome-mouthed visage emblazoned with the rather on-the-nose (technically, on-the-forehead) message: “Damaged.” It was there in 2016 in David Ayer’s Suicide Squad, but the reaction to that and his overall look was mixed. Now, in James Gunn‘s 2021 follow-up, The Suicide Squad, it appears Joker’s emancipated ex, Harley Quinn, played by Margot Robbie, has followed suit and had her own one-word face tattoo removed. How soon before #ReleaseTheTattooCut starts trending on Twitter?

In both Suicide Squad, the 2016 film, and Birds of Prey, Harley Quinn had the word, “Rotten,” inked on her right jaw. She wore it proud, as if to hurl that rotten tomato that the first movie earned back at the critics. However, writer-director James Gunn’s upcoming not-a-sequel/not-a-reboot, The Suicide Squad, casually discards this tattoo of hers. So, what brought about the change in Harley’s appearance? Is she no longer rotten, or does she just not want to display any identifying marks for the police, or what?

In an Instagram Story Q&A (by way of Screen Rant), Gunn answered a fan question about the disappearance of Harley’s tattoo. To hear him tell it, it was as simple as him and Robbie sharing a mutual dislike of the tattoo aesthetic:

Harley’s costume has also evolved, with the character adopting a new red-and-black look inspired by the Batman: Arkham video games. While The Suicide Squad promises to be its own standalone story without much linking it back to the first movie, narrative-wise (besides the return of Robbie and a few other actors), there does appear to be a through-line in Robbie’s head as far as her zany character is concerned. In the Toronto Sun, she spoke about how her portrayal of Harley has developed over the course of three films:

“I think in the first Suicide Squad film she had a certain confidence and cockiness, knowing that she had the protection of the Joker. She was like, ‘I’ll go on this mission, and he’ll get me out of here in a second’ … that was kind of her prerogative on that film. Then in Birds of Prey it was, ‘Oh s—, it’s a scary, cold world. Maybe I can’t do it.’ In this film, time has passed, it doesn’t directly link to either of those films, but it’s not something that Harley is wrestling with anymore. She’s not waiting for Mr. J to show up and she’s not wondering if she can do it on her own. She knows.”

In addition to Robbie, Viola Davis, Joel Kinnaman, and Jai Courtney will reprise their roles from the first film, with Idris Elba, John Cena, Sylvester Stallone, and Peter Capaldi joining them, among many others. The Suicide Squad hits U.S. theaters and HBO Max on August 6, 2021.