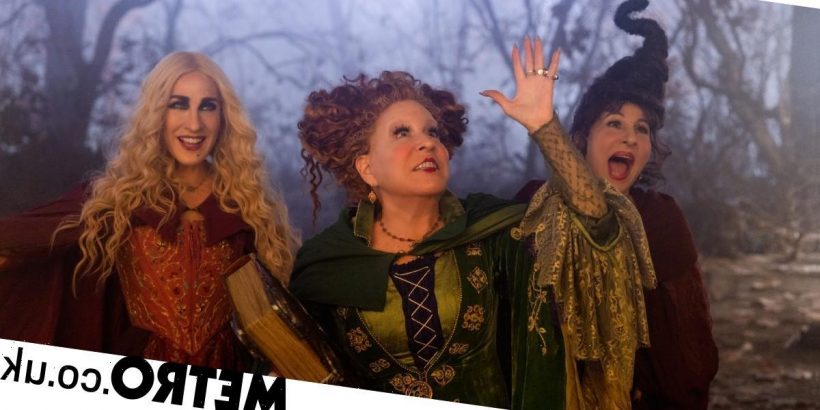 Disney has revealed the first teaser trailer for its hotly anticipated Hocus Pocus sequel and it has put us in the mood for the spooky season!

After quite a journey to cameras rolling on production, and a whopping 29 years on from the original, we are back in Salem, Massachusetts for more magical mayhem, courtesy of a new bunch of teenagers.

For fans of the first Hocus Pocus, there are nods aplenty to its origins, as well as a dramatic return for Sanderson sisters Winifred (Bette Midler), Sarah (Sarah Jessica Parker) and Mary (Kathy Najimy).

We’ve left behind the days of Max, Dani and Allison, and this time it’s Becca (Whitney Peak), Izzy (Belissa Escobedo) and Cassie (Lilia Buckingham) who unwittingly bring back the infamous witches to wreak havoc on their hometown.

‘Birthday ritual, scary movie marathon – same as every year,’ says Becca, when asked for the plans she has for her special day while at school.

Cut to later that day and the mysterious but avuncular Gilbert (Sam Richardson), owner of the local magic shop, is poking the bear, telling the girls: ‘You know, legend has it, it’s on her 16th birthday that a witch gets her powers.’

Of course, we’re then right back to sitting in a graveyard, holding hands and chanting over that recognisable black candle as Becca and Izzy call on the witchy powers that be ‘to help our intentions manifest’.

As the earth cracks open, the return of the Sanderson sisters is announced – and never one to make a quiet entrance, Winifred crows in her familiar style: ‘Look up your children! Yes Salem, we’re back!’

There’s also a hint that we might be treated to another musical number, like the 1993 film’s fabulous I Put A Spell On You.

Right at the end of the trailer, the trio are shown at an outdoor fair where their reputation precedes them.

‘Hey, it’s the Sanderson sisters!’ cries a local, adding: ‘I bet you’re looking for the stage?’

As they exchange a glance, Winifred then responds, with a flash in her eye: ‘Always.’

This alone would be worth the price of admission, so to speak (it’s a Disney Plus Original), with Midler, Parker and Najimy looking as fabulous as ever in their gothic get ups – the hair is back, the red lipstick, the teeth, everything.

Also watching what happens? That creepy skin-covered spell book with an eye from the first movie…

The cast list on IMDb also includes Doug Jones, reportedly reappearing as Billy Butcherson, as well as Tony Hale as Mayor Traske and Hannah Waddingham in an undisclosed role.

Halloween with the Sandersons sounds like a plan, and we don’t have too long to wait, with the film releasing in September.

Hocus Pocus 2 streams exclusively on Disney Plus from September 30.