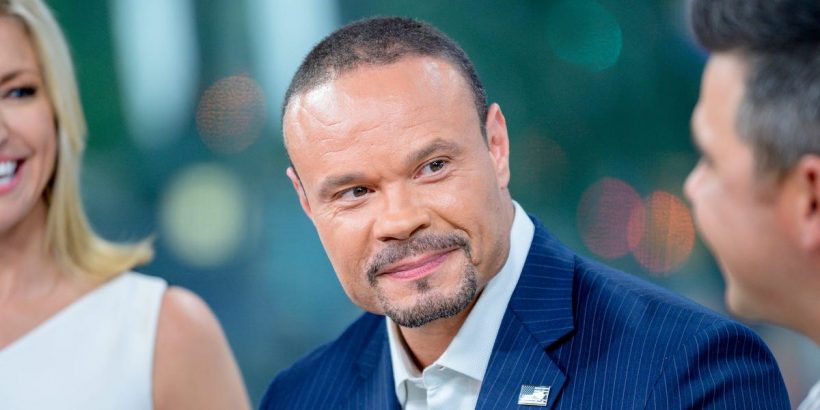 On August 30, 2016, the results came through: Dan Bongino had failed to become the Republican nominee in Florida’s 19th congressional district.

His loss to an establishment conservative, former US Ambassador Francis Rooney, marked the end of his third and final attempt to enter Congress.

Some five years later, Bongino, 46, is arguably more powerful than many of the Republican lawmakers he sought to join.

He wields one of the most influential platforms in conservative media, with Facebook posts routinely reaching more people than outlets like Fox News, CNN, or The New York Times do. He picked a fight with the one-time conservative idol, Matt Drudge, by launching a rival news aggregator, which flourished as Drudge’s influence waned.

In March, he was named the successor to Rush Limbaugh’s talk-radio legacy, taking over the host’s syndicated radio slot in many markets, with a direct line to millions more Americans. Former President Donald Trump is set to star in the first episode of Bongino’s radio show, which launches later this month.

Bongino got here by picking a lot of fights, often against the institutions and people who had until then sustained him. 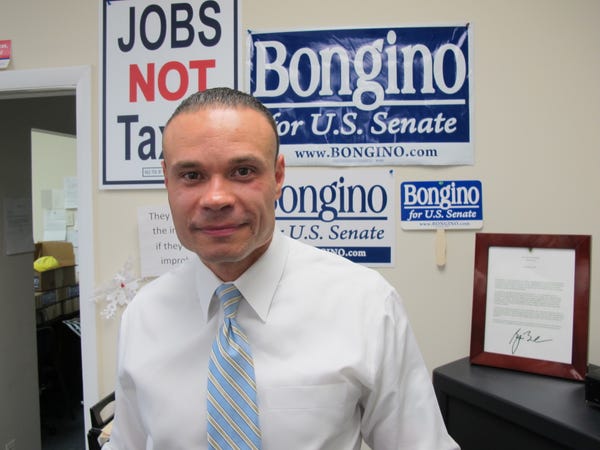 During Bongino’s runs for Congress — for the Senate in 2012 and the House in 2014 and 2016 — his enemy was the Democratic occupant of the White House he used to protect.

From 1999 to 2011, he served as a Secret Service agent, a job he took shortly after leaving the NYPD.

Soon after quitting the Secret Service, he started attacking the Obama administration, arguing that his experience behind the scenes at the White House shocked him into running for office.

“It’s worse than people know. They’d be shocked, scared, if they knew everything,” he told ABC News in 2013, giving few specifics.

His old colleagues pushed back at the time, accusing him of exaggerating his level of access and “hijacking the Secret Service brand.”

Out of power, on the airwaves

Bongino is no stranger to conservative media.

He appeared as a guest on Alex Jones’ Infowars from 2013, then started to get guest slots on Fox News shows.

From February until December 2018, he hosted a show on the now-gone media section of the National Rifle Association.

In January 2019, he became a Fox News contributor after appearing as a guest on shows like “Fox & Friends” and guest-hosting “Hannity.” And on May 12, 2021, Fox News announced that it was launching a new weekend show hosted by Bongino.

Bongino is also a bestselling author, having published books about an alleged “deep state” that works against Donald Trump.

Taking on a conservative titan

Bongino’s ascent really took hold when Bongino took on an ailing titan of the media industry — Matt Drudge, the founder of the Drudge Report. 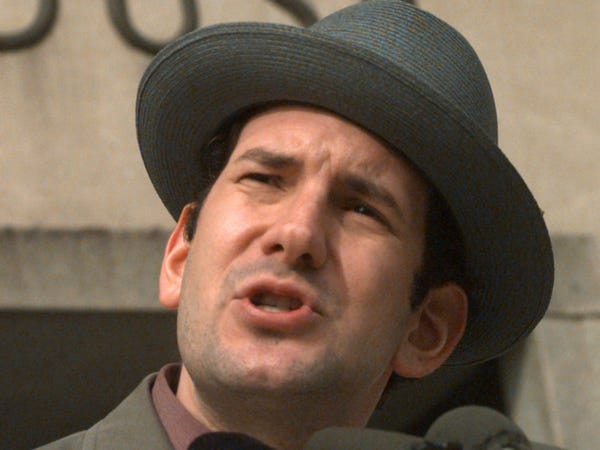 In December 2019, Bongino launched the Bongino Report, a conservative news aggregator that explicitly presented itself as a Drudge-slayer.

The Drudge Report once had a near-mythic status in conservative circles, propelled by its role unearthing President Bill Clinton’s affair with Monica Lewinsky in 1998.

Since then, its lo-fi, punchy list of right-leaning news links has entranced millions of conservatives, prompting politicians and media figures to court Drudge’s favor.

Despite early enthusiasm for Trump’s presidential campaign, Drudge soon turned on him, leaving Bongino an opening.

Matt Palumbo, a staff writer at the Bongino Report, told Insider: “While Drudge initially backed Trump, his opinion quickly veered in the opposite direction during his presidency, heavily conflicting with his audience’s views.”

“Understandably, many people devoted to the website for years and even decades felt betrayed.”

“It came evident that there was a demand for an alternative that would appeal to Drudge’s fleeing audience — and other conservatives as well,” Palumbo said.

“We thought that we’d be able to plug the gap, and the site has been growing ever since it was launched.” 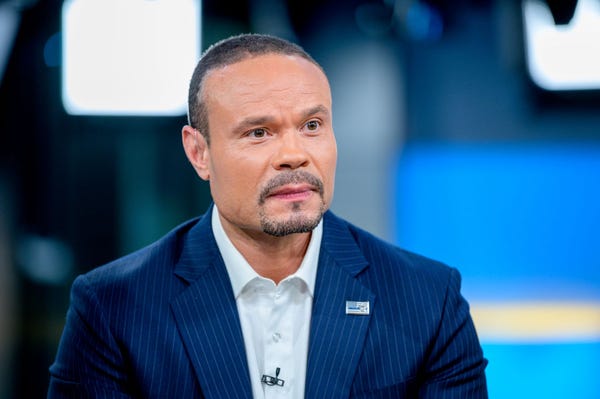 In an interview with Insider, Bongino said he “grew up” on the Drudge Report, calling it “a part of my life.”

Of Drudge’s change on Trump, he said: “I was very disappointed. It’s not a hyperbolic statement …  I just couldn’t take it anymore, so I started my own.”

Bongino’s challenge was cheered on by Trump, who tweeted in April 2020: “I gave up on Drudge (a really nice guy) long ago, as have many others.”

Like the Fox News host Tucker Carlson, other high-profile conservatives have also attacked Drudge and claimed he had turned left as Bongino’s star rose further.

Bongino’s next enemy, despite being one of its biggest stars, is Facebook.

He claims he’s being unfairly targeted by Facebook’s fact-checking systems and expects to be banned from the platform for “ideological reasons.”

His posts on the platform regularly attack Democrats and establishment Republicans and defend Trump. He has in the past advanced baseless conspiracy theories, including the one that the 2020 election was stolen from Trump.

He believes his success on Facebook is despite the platform rather than because of it: “You’d think Facebook would be kissing my butt, and instead they attack us relentlessly,” he said.

Bongino said that just because he’s popular on the platform doesn’t mean it isn’t punishing him.

“People come back [saying]: ‘Oh, well, Dan, you’re one of the number one Facebook pages in the country on CrowdTangle on any given day,'” he said, referring to the tool that tracks how content spreads on social media.

So he decided to invest in Parler, a self-described “free-speech” platform that proudly refused to moderate content and became a haven for the far-right.

After the January 6 insurrection, Apple and Google banned Parler from their app stores, saying the company did not do enough to stop the rioters using it to plan the attack. Amazon also cut it off from its cloud-hosting service, forcing it temporarily offline. 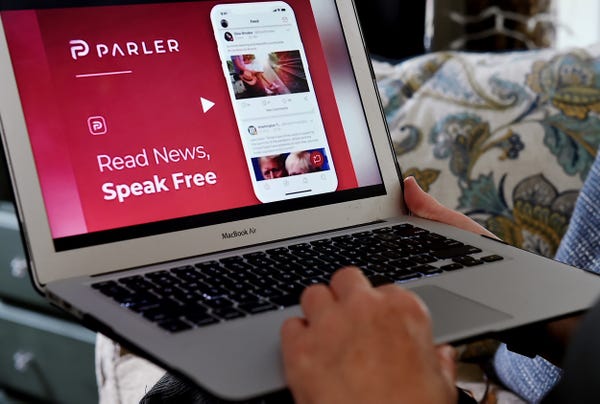 Bongino said this reaction was unjustified.

“All we did was put up a free-speech site,” he said, quipping: “And God forbid that happens with these new communists on the left.”

“They want you on Twitter, the liberals, to make fun of you, which is fine. We’re all big boys and girls. And then when you leave Twitter and go start your own successful platform, they want it canceled so you’re forced back on Twitter where they can attack you,” he said. “It’s really sick, deranged, lunatic stuff.”

“I lost a fortune of my hard work and money on a platform that did nothing wrong, nothing,” he said.

Since Insider’s interview with Bongino, Apple has allowed Parler back on the App store, but with new restrictions.

Bongino says he doesn’t quite know how he gained his large platform.

He told The New York Times last October he wasn’t sure why he suddenly became one of the figures with the most reach on Facebook in the US.

When asked by Insider, he claimed to be equally unsure but suggested his background may have made him stand out in a crowded field of voices.

“I don’t know. Maybe it’s a combination of me having been a law-enforcement officer and then a federal agent and having worked in the White House, but having grown up a little poor, but then having crossed over these socioeconomic barriers, now we’re doing pretty well,” he said.

But Bongino anticipates battles to come.

He said one of his biggest problems getting people to read and listen to his content is just how “boring” President Joe Biden is compared to Trump.

(Other Republicans, notably strategists working on 2022 midterm campaigns, have also cited this challenge.)

“It has been a real chore the last few months since we’ve lost a Donald Trump, who has a personality the size of Texas — to go from that, to this,” Bongino told Insider. 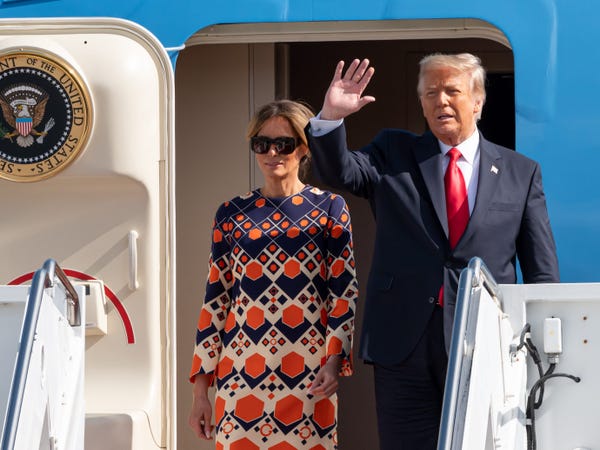 He also believes Trump’s ban from major social media sites will harm everyone in the media business.

“It hurt me. It hurt him. It hurt everyone. President Trump’s social media feed was a source of endless material for shows and discussion and sparked a lot of debate,” he said.

“Listen, whether you agreed with his tweets or not, does any serious person doubt they would spark a national conversation every time he would tweet something of substance out?”

“Not having him on those platforms, I think, hurts everyone. I really do.”

Bongino will want his brand of conservatism to win as the GOP finds itself at an ideological crossroads and figures out what direction it goes in after Trump’s presidency.

He pledged to use his newest platform, Limbaugh’s old radio slot, to engage his fans.

“You just do the best you can,” he said, “and you hope the audience finds the content appealing.”