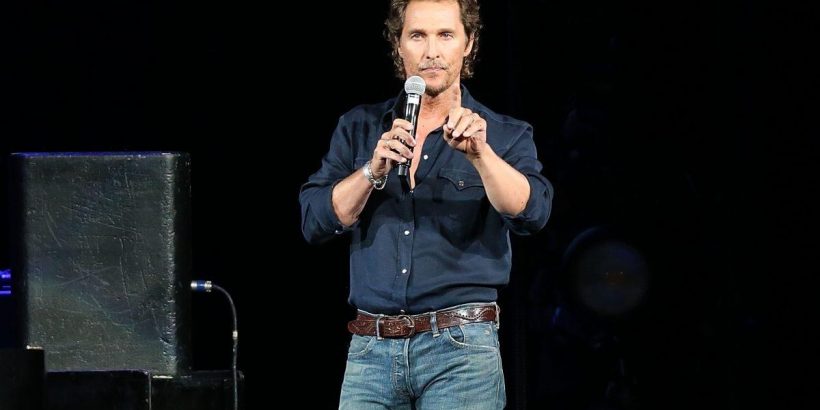 Matthew McConaughey height and how he grew up

Growing up in Texas, McConaughey entered the Little Mr. Texas pageant when he was eight years old. He came in second place. McConaughey went to the University of Texas at Austin on the path to become a lawyer when he decided he’d rather make movies.

Reports on McConaughey’s height range from Celeb Heights and Compare Celeb’s low of 5’10 ¾” to Healthy Celeb adding an inch and Celebrity Inside rounding up to six feet even.

McConaughey’s big break was in Dazed and Confused, which writer/director Richard Linklater filmed locally in Austin. Wooderson (McConaughey) was the graduate who kept hanging around high schoolers, with his line “Alright, alright, alright.” McConaughey is about the same height as 5’11” co-stars Jason London, Adam Goldberg, Sasha Jenson and six foot tall Rory Cochrane.

RELATED: How Matthew McConaughey Beat Kevin Costner and Woody Harrelson for the Lead Role In ‘A Time to Kill’

After McConaughey graduated, he then moved to California and got some roles in Boys on the Side and Angels in the Outfield. Then he started to get leads in Lone Star and A Time to Kill. Lone Star paired him up with 5’10” Kris Kristofferson. In A Time to Kill, he defended 6’2” Samuel L. Jackson in court, with the help of 5’7” Sandra Bullock. 6’4” Donald Sutherland played his mentor and his 5’9” son, Kiefer, played a Ku Klux Klan member in the film.

The success of A Time to Kill landed McConaughey roles in Contact and Amistad. McConaughey paired with 5’3” Jodie Foster in Contact, and tried a historic case in Amistad, with 5’9” Anthony Hopkins playing John Quincy Adams. They defended 6’2” Djimon Hounsou.

Rom-coms and The McConaissance

McConaughey found his calling as a leading man in romantic comedies like The Wedding Planner and How to Lose a Guy in 10 Days. Wedding paired him with 5’5 Jennifer Lopez and Lose a Guy with 5’6” Kate Hudson. Hudson and McConaughey reunited for Fool’s Gold. He also made Failure to Launch with 5’3” Sarah Jessica Parker and Ghosts of Girlfriends Past with 5’8” Jennifer Garner.

McConaughey took his career in a more serious direction, making Mud with 5’1” Reese Witherspoon and Dallas Buyers Club with Garner and 5’9” Jared Leto. Both McConaughey and Leto won Oscars for that movie. The HBO series True Detective paired him with EdTV co-star Woody Harrelson, at 5’10”. McConaughey continues to make interesting choices between blockbusters like Interstellar and edgier movies like Serenity, White Boy Rick, The Beach Bum and The Gentlemen.