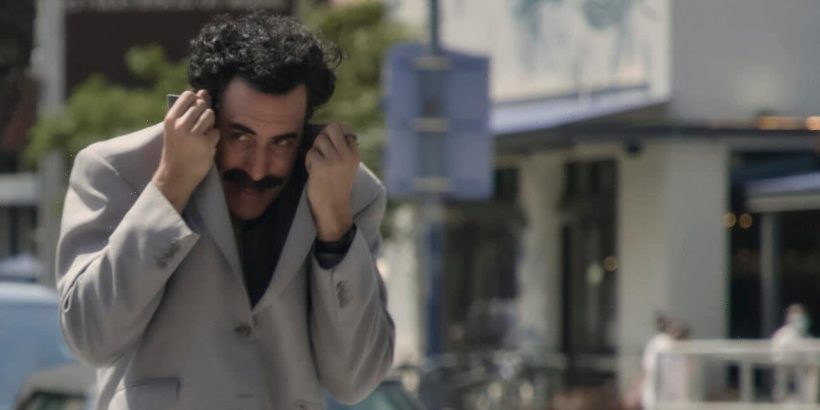 TheWrap awards magazine: “We were able to take beats we already wanted to get in the movie and shape them to what the world had become,” director Jason Woliner says

A version of this story on “Borat Subsequent Moviefilm” first appeared in the Down to the Wire issue of TheWrap’s awards magazine.

Years ago, director Jason Woliner was sent a script and told only that it was to be Sacha Baron Cohen’s next movie. The script was top secret, encrypted and nowhere in it did it contain the word “Borat.”

That movie, of course, would become “Borat Subsequent Moviefilm: Delivery of Prodigious Bribe to American Regime for Make Benefit Once Glorious Nation of Kazakhstan,” whose whopping nine screenwriters — a record for the category, to go with the record for the longest title ever nominated for an Oscar — are celebrating its Oscar nomination.

And if it seems odd that it would take nine people to write a largely improvisational film, and that the film would then win a Writers Guild Award and be Oscar-nominated for its screenplay, the “Borat” sequel did in fact have a real script, and it also required a lot more work from its screenwriters.

From the beginning, Woliner said, Baron Cohen had a clear structure of the relationship and journey between disgraced Kazakh journalist Borat Sagdiyev and his daughter, Tutar. The film was modeled on romantic comedies like the Clark Gable classic “It Happened One Night,” but its third act had to be revised because of the COVID pandemic, form-fitted to the events in ways that better told the story of life in 2020.

And yes, the filmmakers always intended to end by duping someone in Donald Trump’s inner circle. So while much of the cast of “Borat Subsequent Moviefilm” didn’t realize they were actually in a moviefilm, very little about it happened by accident.

“How do you make a really funny satire that’s also a father-daughter story?” Baron Cohen said. “That was one of the things we set ourselves: Try to get the audience really moved by this relationship with two actors they know are fake.”

The first challenge was to bring Borat back into the real world and avoid treading the same territory of the original “Borat.” Having Maria Bakalova as Tutar alleviated some of the pressure on Baron Cohen and allowed someone else to take the spotlight. But it also presented new challenges in giving both characters an arc and positioning Tutar as someone who could change Borat for the better.

In the story, Borat and Tutar split up, only for Borat to find her at a gun-rights rally. Woliner explained that the original idea was for Borat to meet with men’s rights activists who could help track her down — but when COVID hit, anti-mask, anti-lockdown conspiracy theorists turned out to be a better alternative.

“We were fortunate in that we were able to take beats we already wanted to get in the movie and shape them to what the world had become,” Woliner said. “We realized very early on that we couldn’t make a movie that in many ways was a documentary about 2020 without addressing what happened to the world.”

“We felt if we didn’t risk our own safety by highlighting that, what would be the point of making this movie? We restructured, we kept the same themes, the same overall shape of the movie, but we made this our Act 3 backdrop,” Baron Cohen added.

Jeanise Jones, the kind-hearted babysitter in the movie who looks after Tutar, was a surprise discovery as well, but the screenwriters knew she could be key in helping Borat arrive at his big realization that he loves his daughter, a moment that originally would’ve been handed off to a doctor or psychologist.

“We realized how powerful she was and what a strong presence she was in this movie, and that’s why he then went back to her and gave a roll of the dice,” writer Anthony Hines, who has worked with Baron Cohen as far back as Da Ali G Show, said. “He had a pain in his chest, and a doctor would tell him, you’re experiencing a thing called paternal love, which Borat had never heard of before.”

Baron Cohen said the real reason to write the character of Tutar was to highlight the misogyny at the center of the Trump administration — and there was no better way to show that “than to have somebody from Trump’s inner circle be completely inappropriate with a young girl in a hotel room.” They had ingested the story structures of numerous father-daughter movies or rom-coms, and decided theirs needed to end with the now infamous scene between Bakalova and Rudy Giuliani.

“It’s almost like a thriller,” Baron Cohen said. “Structurally, as a screenwriter, Rudy is like a killer and the murder weapon is down his trousers. So Borat has to get in there and stop the fatal blow, no pun intended…If that scene hadn’t have worked, the movie certainly wouldn’t have been as impactful.”

You can watch more from this interview with Sacha Baron Cohen and the “Borat Subsequent Moviefilm” team here.

Read more from the Down to the Wire issue here.