Dysfunctional families have been the basis of many classic comedies, from the Kramdens and Bunkers on TV to the Fockers in movies. Now Ike Barinholtz throws politics into the mix in The Oath.

Barinholtz wrote and directed the movie about a fictional President who asks Americans to sign a loyalty oath. Chris (Barinholtz) is against it, but many of his siblings and parents are pro-Oath.

When the family comes together for Thanksgiving, sibling rivalry turns to heated politics. Then two agents of the Citizen Protection Unit (John Cho and Billy Magnussen) stop by and rouse even more rabble.

Monsters and Critics spoke with Barinholtz for the second time this year (check out our interview for Blockers) about The Oath. The Oath is in theaters Friday, October 12, and read our review here.

Monsters and Critics: People say, “Don’t let politics break up your family,” but if your loved ones can’t respect your beliefs, what good is family?

Ike Barinholtz: Here’s where I’m at with that. The influence for this movie was basically after the election, my mom, my brother and I got in a really bad argument after dinner. Yes, we were drinking but we got into an argument about the election and started playing the blame game.

My family’s liberal. We’re all on the same side. We voted for the same person, and if we’re arguing because we’re so stressed out, what’s going on around the country?

Through talking to friends who were going home and hearing horror stories about people walking away and saying, “I can’t ever talk to my family again,” there’s something about that that felt sad to me.

I understand, it’s hard. I’m not trying to tell people what to do. If you have an uncle who’s like, “I agree with Alex Jones,” maybe you don’t see him so much, but one of the messages of this movie is we should try our best. Really, really try our best.

It’s easy to say, “I’m not talking to my brother anymore” but we should try our best to not let crazy external forces that ultimately we have no control over permanently disable our family ties and our relationships. Once you cut that tether, it’s hard to reattach it.

I do feel like there will be a day where there’s not a president named Trump or there won’t be a president as divisive as Trump. I feel like if that day comes and we have told people we care about, “I can’t with you anymore,” I feel like we’ll be cursed.

My ultimate goal with this movie, first and foremost, is to entertain people because it’s not a documentary, yet. I do hope people walk out and say, “That was a funny movie. It was scary. I should call my brother” because that’s all we have.

If we start cutting these ties, our bubbles just get smaller and I don’t think we can move forward.

M&C: Is there an aspect that people with conviction are asked to be quiet just to keep the peace?

IB: Yes, and that’s incredibly frustrating. I understand why some people do it because it’s difficult. First of all, you used to be able to really sidestep political conversation at the table.

It used to be up until recently that you could pivot to other things like maybe sports. Not anymore. The topic has permeated everything. So people say okay, let’s just not talk about it, but you’ve got to be very disciplined.

I think also not talking about it, again, is not going to move us forward. It’s very hard, but if we’re able to discuss things and say how we feel and remove a little bit of the emotion and angst while still telling people, “Hey, I think this is wrong,” I think if we’re able to do that and keep a dialogue open, I think we’ll be better for it.

M&C: Chris is much more understanding when he disagrees with his sister. Is that because his brother is so much more in your face about his beliefs?

IB: Yeah, definitely. We all have that person we’re closer with and when they let you down, you give them a little bit more of a pass.

I think that’s a big flaw in Chris is he initially does kind of give his sister more of a pass because they are more politically linked. They are on the same side a little bit more.

I think Chris is a jerk to her too. At Thanksgiving he tells her, “F*** you.” He turns to her and says, “F*** you too.” I think that’s a big flaw in his character that in the moment, in that heated moment at the table, he can’t even really differentiate between his brother and his sister.

To him, they’re both traitors. The mindset Chris has eliminates nuance which is more important than ever when we’re talking politics now.

M&C: Is another of Chris’s flaw that as firmly as he believes in his convictions, he’s so obsessed with the news and checking every single update that it’s also a toxic addiction?

IB: 100%. That’s one of his many flaws. I hung out with myself for the last two years and I was that guy. I was the guy who at 6:15 AM was checking Twitter saying, “Oh my God, he just tweeted this. This is crazy. We’re all going to die.”

You have an obligation, especially with the crazy situation we’re living in now to be plugged in to a certain extent, to be aware of what’s happening, to be aware of the good and the bad and to be a responsible American, but we can’t let that dominate every aspect of our life.

I think a lot of people, myself included, were just living in that first basket where everything is terrible and there’s no light and what’s the point of working out and I’ll play with my kids later on, I need to read this political article right now. I know that’s certainly not healthy.

M&C: Once Mason (Magnussen) enters the story, he’s so threatening it makes it impossible for him to let them go. Does he even realize that he’s making that impossible? If he just said nothing they’d probably let him go and he could terrorize whoever he wants.

IB: I don’t think he realizes at the moment. Mason, to me, is the embodiment of toxic angry male energy, who demands authority and can’t believe he’s in this situation. He finally gets to a point where he’s like, “Bring it on.”

Mason is the one character in the movie who I think might be an actual psychopath, who just doesn’t give a sh*t and wants to hurt. That’s why I was so happy to see by the very end of the movie, you see this faintest glimmer of humanity in his eyes.

I hope that even guys like that, these very scary, very real people that we see sometimes on the news, even they have a glimmer of humanity left inside them. It might take something incredibly traumatic, being pistol whipped and tied to a chair, to bring that out of them.

M&C: Did you decide as the writer who called CPU on Chris?

IB: You know what? I never fully made that decision. I left breadcrumbs all over. To me, the reason I never wanted to know was because I’ve always been very obsessed with McCarthyism.

You would be sure that it was your business partner who cheated you out of a bad deal. Then it could end up being the guy who shines your shoes. You didn’t tip him.

To me, there are some breadcrumbs around Max Greenfield’s character. There are some around my mom’s character but one of the joys for me is after the movie is over, having people come up to me and give me their thoughts on who they think it is. It’s nagging but I really want it to be that way

IB: Yes, exactly. We never quite know exactly what’s in there but it’s glowing and everyone wants it. 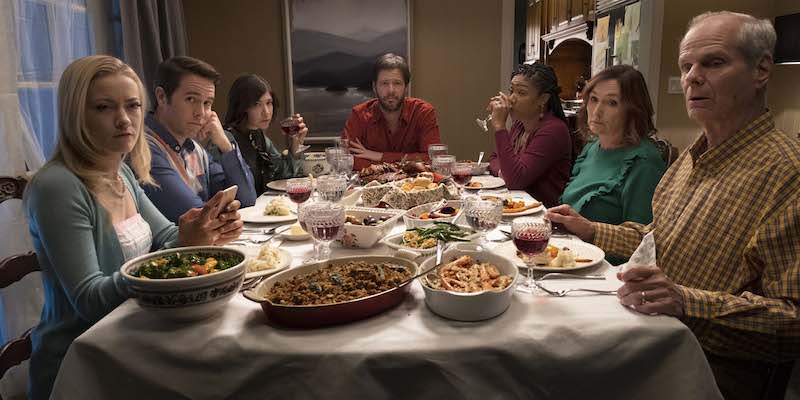 M&C: There’s so much overlapping dialogue, was the sound mix difficult in choosing which dialogue to highlight?

IB: There’s two types of scenes that I think are pretty hard to mix. One is a family arguing at a table and the other is chaotic violence. So the mix took a very long time for us to kind of find out who we hear when.

That was actually the part of the post process that really took me by surprise in terms of how long it took, just because my experience of directing TV, the mix is a five hour thing as opposed to a movie where it’s a three or four week thing. There was a lot of effort to make sure we hear what we were saying.

M&C: Did you sell Jay Duplass on, “I just need you to walk in, lay in bed and come down at the end?”

IB: Pretty much. I always kind of knew that moment where he shows up would get a big laugh, and just seeing sweet little Jay Duplass all worn out would be funny. I’ve known Jay forever and he acted with me on The Mindy Project so I just love him so much. He and Carrie I thought would make such a good couple, that was it.

M&C: Tiffany Haddish sort of uses her comic energy for different purposes in The Oath. Was that appealing to her

IB: Yeah, when she read this, she said, “I’ve never seen this movie before. I’ve never played this character.” I think she really likes the duality of how the first half of the movie she’s kind of quietly suffering while her husband descends further into madness.

So watching Tiffany Haddish, who we’re so used to seeing being a big, powerful thing, suffering quietly was appealing to her. Then we get to see her explode in the second half of the movie which I think is kind of what we all know and love.

M&C: Are you a director now? Are you going to write and direct more?

IB: If they let me. I hope to. I really loved it. I loved the first part of it which was the work, and now this part which is showing it to people and getting to hear how people relate to it and what they thought of it is exhilarating. If they let me do more movies, I’m doing it for sure.