Director Brad Bird has cleared things up with a fan of The Incredibles 2 in person (well, on Twitter), after they raised a potential plot hole in his movie.

Digital Spy may have awarded the animated sequel a glittering 5-star review, but according to one Twitter user, the boat scene towards the end of the movie didn’t quite add up.

Wyatt Wu shared his thoughts with the social media world, tagging Brad into his thread.

“PLOT HOLE in @TheIncredibles 2 that has been bothering me (SPOILER WARNING) a thread,” he wrote. “So, when all the supers are on the boat the last thing everyone in the city sees on TV is mind-controlled Mr. and Mrs. Incredible making that whole speech that Superheroes are a threat.

“Then, the TV broadcast ends and the next thing people see is that the ship is headed straight for the city. We as the audience knows that Mr and Mrs. Incredible were being hypnotized by Evelyn and eventually they save the ship from really damaging anything in the city.

“The ending shows them painted as the heroes who just saved the day again. But like, all the people in the city have no clarification on everything that happened after that original broadcast.

“To the citizens, the supers saved everyone from a potential boat destruction that the Supers themselves created. Everyone in town had no idea who Evelyn is so why are people cheering when the Incredibles stopped the boat? Shouldn’t they be confused? AMERICA EXPLAIN. #incredibles2.” 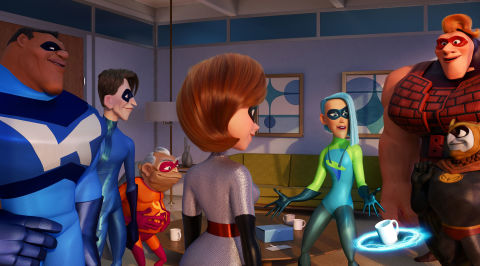 Luckily for those fans who can relate to Wyatt’s issue with the movie, Brad replied in person soon after.

The Iron Giant director explained: “I don’t agree that it’s a ‘plot hole’. I assumed the audience would figure out that, once the boat was stopped, normal exchanges of information would happen between that crash and the villain being taken away.

“I didn’t need to SHOW it. Nothing worse than explaining the obvious.”

So there you have it – not every filmmaker feels the need to show everything on screen.

And Wyatt was pretty happy with the explanation too, tweeting him back to say: “OH did not expect you to actually reply. COOL. you’re completely right though and it doesn’t make the film any less incredible than it is. thanks @BradBirdA113.

“Also i would like to mention that its been an honor to be proven wrong by @BradBirdA113 himself. I’m sorry for questioning your genius.”

Meanwhile, Brad has also been talking about the possibility of a third Incredibles adventure – wouldn’t that be something?