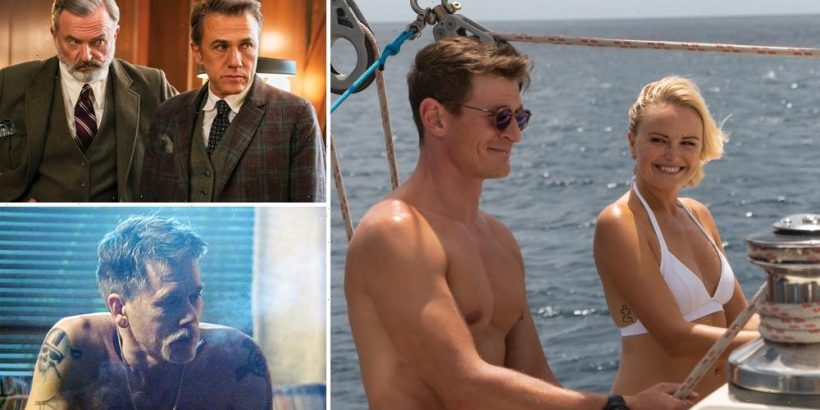 As COVID’s shadow swept across the independent film market over the past 20 months, the banking and finance sector experienced a collective shudder: insurance was unavailable; completion bonders blocked COVID-19 cover; A-listers avoided shoots; and streamers shifted millions of eyeballs away from already shuttered cinemas. Now, as AFM prepares for an all-online offering, with many grateful for the early decision to drop a physical event, entertainment bankers, second-tier financiers and sales companies are taking stock while looking forward to 2022.

“During COVID, survival has become the new success,” says Mister Smith Entertainment’s David Garrett. “We’ve all been navigating choppy waters, and COVID has exacerbated a perfect storm, with streamer and studio productions putting pressure on the independent production sector in terms of cast and crew availability. There have been huge gaps in cash flow across the business due to production and delivery delays, but we miraculously managed to get three films into production last quarter of 2021, and we are finding that the right projects can still pre-sell steadily.”

Indeed, evidence from financiers and sellers is that, for the right package and correctly priced project, pre-sales are alive — but not for sub-$5 million marginal fare with no recognizable director and onscreen talent. Territorial distributors, desperate to rebuild their slates over the next 12-18 months, are leading the way with minimum guarantees for the right content, while still wary of the chaotic trend whereby top streamers later offer a higher overall number, often resulting in a complex unwinding process.

Highland’s topper Arianne Fraser agrees. “It’s brutal, because re-opening and re-negotiating any pre-sales is a lot of paperwork and relationships are really tested despite [pre-agreed] kill fees. But some aren’t too upset: they know that OTT hold-backs were limiting their theatrical monetization options anyway.”

Just before the pandemic closed the world in March 2020, a little-noticed shift in the entertainment banking sector took place. Pacific Mercantile, First Republic, Bank Leumi and Bank Hapoalim all exited the indie film and TV finance sector, and when Opus was acquired by Pacific Premier Bancorp that spring, the entertainment division was shuttered. While remaining banks couldn’t take immediate advantage of the exodus, second-tier lenders including Phil Hunt’s aggressive Headgear, Great Point, Ingenious Media and others stole a march into unchartered financing territory given the risk management challenges thrown up by the pandemic. Unencumbered by the credit committee approvals systems used by banks, but faced with a volatile marketplace at best, pricing rose but so too did creative engineering in order to ensure projects stayed afloat, got green lit and that producers could stand and deliver.

Between March and July 2020, Hunt had 73 projects he was involved with as a financier. “Only 10% had problems, just one pre-sell was reneged on and I didn’t lose any principal. I spend a lot of time doing my own bottom-line numbers, working with a range of sales companies [beyond Hunt’s sales operation Bankside], and then compare our worst-case numbers. There’s rarely more than a 20% differential.”

Numerous producer and sales sources praised banks and financiers for taking time to find creative solutions to COVID and industry challenges of late. “Fulcrum [Media Finance] has been really great at supporting productions and finding ways to solve cash flow and risk issues,” says producer Richard Fletcher, CEO of production house Libertine. “They’ve got the flexibility of a private entity but the backing of Bank of Montreal” and an Australian retirement fund. Meanwhile, bankers such as Cofiloisirs’ Jean Baptiste Souchier confirm that “you need a plan. We’ve been taking a pragmatic approach by working with producers to assess what risks they might face and plan for gaps, delays and try to allow the structuring to address potential events.”

Pricing is a hot topic in the market, now that lenders have become more comfortable with the mix of widely available government-backed COVID insurance schemes (recently joined by Great Point’s new COVID-inclusive insurance offer) and well-prepared completion guarantors. Banks are still lending at around 5%-6.5% on senior debt plus their arrangement fees, while gap is pegged at anything from 10%-11% to as high as 18% according to a range of senior financier sources. However, numerous leading banks are either avoiding gap completely, or in some cases charging a gap fee while still offering a blended rate rather than hiking the gap interest separately. Blended rates are being charged out at more like 12%-14% than the previous levels of around 6%-7% on fully collateralized budgets, but sources all agree that the return of the senior institutions will force second-tier pricing to drop back somewhat as the market starts to settle.

“The advantage of second-tier lenders is they have a credit committee made up of normally one person,” says Brian Beckmann, CFO at Arclight Films. “For producers and sellers, getting their trust is critical. The mix is also complex, as banks may not lend as much value against contracts [say 70% rather than 90%], but they can sometimes lend 90%-95% against top paper.”

Gap is now very much seen as “equity at risk” according to Great Point’s CEO Jim Reeve, given that it is treated as a performance risk rather than a delivery risk. Meanwhile, all concur that the days of “super gap” at 30%-40%-plus of budget lent against unsold territories and future revenue streams are over, while financiers prepared to extend up to 5% of a budget “will largely depend on value and pricing — and the quality of the market test offered by pre-sales and collateral in place,” says Highland’s Fraser.

Alternative routes for producers are to work with a bankable sales operation, where $200,000 to $500,000 is advanced in a “last in, first out” position explains Arclight’s Beckmann. “That’s hard on new sales companies as they can’t compete, but it also makes us more picky about finding and seeking the right project. Execution-dependent [projects] may not cut it anymore.” Many films don’t deserve a full theatrical release but those that do promise an audience “need somewhere between 500-800 U.S. screens to generate a chance for real royalties,” Beckmann says.

Traditional “jigsaw puzzle” financing, involving a mix of pre-sales, tax credits, incentives, broadcasters, gap and equity, has become more like the game Chutes and Ladders: Risk worries center around the unpredictability of sales estimates next to ultimates — where a post-delivery drop in value can sink a film back down the board. “Half the world is still missing,” says animation specialist SC Films’ Simon Crowe. “Key territories like Latin America and Southeast Asia have been hit hard and sales are really slow. Australia has suffered and France has a huge backlog of more than 150 titles to release. The U.K., always a theatrically driven market, is tough, while Germany is hard because broadcasters — so key for triggering financing in the European ecosystem — are focused on reality and live shows and doing less feature slots today.”

Piecing together an indie finance plan is not for the weak- hearted. Garrett points out that market values are still tied to theatrical: “Some established U.K. buyers, for example, have rate cards with different platforms, but they only get a significant license fee if the film has done very substantial box office. How much P&A will it take to get there? Add in the loss of the DVD safety net and pressure on the pay and free TV, and it becomes a question about confidence in the level of [minimum guarantees] … Unless you have a very high-profile movie to sell, it’s often tough to get more than around $5 million out of international sales up front, and we’re therefore largely focused on films with a budget range of between $5 million and $10 million, but of course we stray outside those boundaries at both ends.”

U.K. financier Quickfire’s James Atherton concurs: “We’re not currently in a position to do decent forecasts. We need more news from the buyers, more cash flow from theaters and a bit of volume, which will set the pricing.”

Payment terms are also a hot subject. How certain platforms fund, acquire and license content is a prime case in point. “It can present additional challenges,” says Garrett. “Some platform’s payment terms can drag out over months post-delivery. If you have a financier charging, say, 10% interest, then it’s costing you money which is not budgeted. In the end though, the license fee has to be sufficient to compensate for this.”

Meanwhile, bankers see wider angles. Coutts, which was not unavailable for comment, is understood to be cash-flowing significant levels of Netflix paper, while lenders including Hunt are happy given “Netflix is probably too big to fail.”

Longer lending periods are deemed good news by financiers as they make more interest. “But I do understand the producer’s perspective as it turns the industry on its head if you’re still getting paid years after delivery,” says Banc of California’s Adrian Ward. “However, on the one side of the ledger is delayed payments and higher costs; on the other is the huge levels of production cash coming into the industry. And sometimes the streamers will commission, fully cash-flow and be the bank. People should remember the likes of TWC and Relativity before they complain.”

The word “hybrid” is being used increasingly to describe the muddled landscape occupied by traditional distributors, sales companies and aggressive new streaming platforms vying for content. And where there are major market shifts, there are opportunities. A-list producers backed by heavyweight financiers and with access to cash flow can take a tougher position on major streaming projects — in particular long-running series. One producer likened it to “becoming the studio”: carrying the production/delivery risk with associated warranties, but armed to negotiate higher fees and a better share of second- and third-run licensing revenues.

Indie movies are coming under major pressure re costs and fees. The majority are performing far from cash break-even and tangible net profits than ever before. Collection agents consulted, including Freeway and the European Collections Agency (ECA), confirmed a steady rise in the volume of productions of late but mainly thanks to TV/streaming content rather than movies. “There’s a definite revival,” says Freeway topper Gadi Wildstrom. “The number of CAMAs [collective account management agreements] opened has gone up significantly, but the indie budgets have gone down and larger films at say $25 million-$50 million are much more rare.”

In terms of performance, ECA topper Peter Bille Krogh says the polarization suggested by their data is striking. “We’re seeing strong titles are getting better revenue results, but the lowest performing films are much worse.”

The downward pressure is inexorable: Sales and marketing costs have been reduced from typically $150,000 to between $50,000 and $75,000 per title depending on its scale of ambition, while smaller sales agents are being pushed to accept a fixed executive producer fee and a lower commission of around 5% rather than the standard 5%-10% for North America depending on budget, while the typical 15% on foreign is being debated by producers if a major streaming deal is negotiated.

“It’s still very much a relationship biz,” says Crowe. “A streaming deal takes time, and very often we’ve been involved increasingly in the development, packaging and financing of the project from an early stage. But it’s all about quality not quantity.”

Some are convinced that the real gold is just over the horizon in the shape of different delivery systems. Advertising, so pressed upon post the 2008 financial crash and now the pandemic, is back in business according to every other source for this report.

“I really believe that the AVOD [advertising based video on demand] model is the one that’s going to be the savior of the indie content business,” says Hunt. “It’s doing great business in the U.S. and the windows are crashing. Young people don’t have cash and are happy with free content, and social media and AVOD are natural links for a changing audience.”

Angus Finney’s new book, “The International Film Business: A Market Guide Beyond Hollywood” (3rd edition), will be published in March.