Even the psychiatrist in the hospital where depressed writer Taher Mohebi is committed in Tale of the Sea calls him “Maestro”; he may be borderline schizophrenic, but he is still revered. “Poetry is a major part of our culture,” says veteran Iranian filmmaker Bahman Farmanara, who directed Tale of the Sea and plays Mohebi himself.

Over the 40 years that Iran has been designated an Islamic Republic, however, that literary culture has been allowed to wither on the vine. “So many of the big important poets, writers and filmmakers have died and nobody has been replaced by anyone as valued as the people we have lost. That’s why I wanted in this film to portray a man who had lost his mind after seeing atrocious things done to young kids in an uprising.” 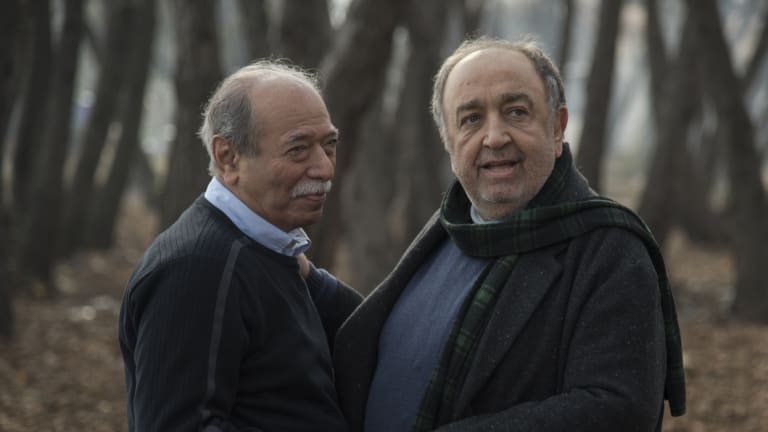 Mohebi is one of these last Mohicans. Tormented by violence he has witnessed against his own students, he drifts between versions of reality. Back home in his remarkable, highly glazed beach house, where the waves form a continuous soundtrack to his disintegration, he is visited by both real well-wishers and chimeras who emerge from memories and visions. Is he based on anyone the director knows? “He’s not really based on any one person. He could be partly me. He could be partly anyone who has been working artistically in our country.”

Farmanara is 76. He has been making politically charged films for 50 years; his first feature was about the ravages of nepotism under the Shah’s corrupt rule. At roughly the same time, he became well-known as a producer working on Abbas Kiarostami’s first film. “When you are very well known and very popular in the country, they put up with you; they don’t bother you that much,” he says. “I have always been a person who stood against the government, both before and after the revolution, so they know that. “

But it hasn’t been an easy run. His passport was withdrawn for “a couple of years” and he has had to fight the cultural authorities both for permission to make each film and to show the finished product, a process that can drag on for years. His previous film was released after three years of being banned. It was about a man who defies the revolution by dancing. “There is nothing in Islam that says you are not allowed to have a good time, but that is what has happened since the revolution,” Farmanara says. “Even if you are having a birthday party and 40 people are invited, the police come and say ‘why are you having a big party?’ So that film was a response to that situation.”

Tale of the Sea tells a much less festive story. Before his wife Jaleh (Fatemeh Motamed-Arya) comes to collect him, Mohebi pictures the two of them sitting on a terrace wafted with mist, recalling fondly how they fell in love. In real life she is planning to divorce him. Full of suppressed fury, she erupts when he reads a letter saying they are about to have a visitor: Parveneh (Leila Hatami, from A Separation) the adult daughter of a woman with whom he had an affair 30 years earlier. Before the affair, she had been Jaleh’s best friend. To have this betrayal breathed back into flame is too much for Jaleh; she leaves. 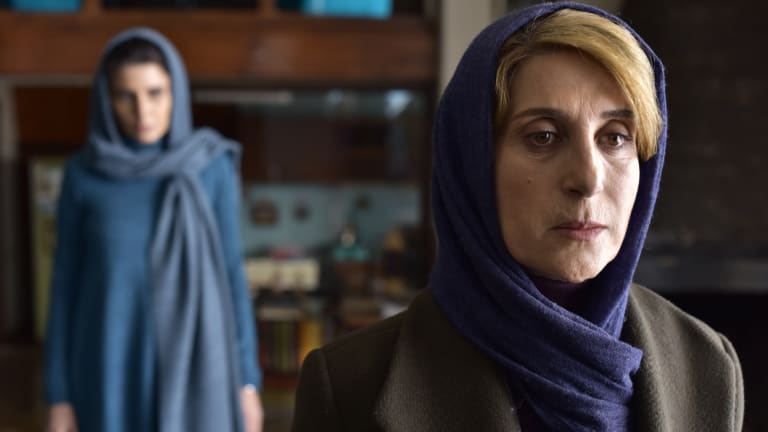 Fatemeh Motamed-Arya (right), who plays Jaleh in Tale of the Sea, screening at the Iranian Film Festival.Credit:IFFA

“The most important thing in the script when I read it was the loneliness of everybody, of the contemporary person now in the world,” Motamed-Arya says. Jaleh is considerably younger than Taher; we learn she was originally his student. “I think she is suffering for something she wanted to have but never found in the marriage,” Motamad-Arya says. “She had imagined a better life with the man she loved. Maybe she feels she could have the life she had as a student, a life like his, full of endless talk about literature, about life, about books.” That didn’t happen. “And all the time she follows him she couldn’t find herself. That’s the reason I think she feels suffering.”

Jaleh has Farmanara’s sympathies. “She has lived with him for 35 years. My wife and I recently had a celebration of our 50th anniversary and I said in my speech that the celebration is not of our 50 years of marriage, so much as a celebration of her putting up with me. Because I am not an easy person. I always want what I want. I always want to do the films I think I should do. Life has not been exactly a bed of roses for her but we have three children, we have two grandchildren and whether it’s love or habit, we can’t live without each other.”

There are films he would like to make but can’t – a favourite idea is for a film about the poet Forough Farrokhzad, which will never be permitted because she was a free spirit, never wore a veil and openly had love affairs, all of which are forbidden on screen. “All the things that make her interesting,” he says crisply.

Women on screen must have their heads covered, no matter where they are; a woman cannot touch a man, even if they are supposed to be married. Since the revolution, the population of Iran has jumped from 37 million to 80 million. It must be a miracle, Farmanara jokes, given Iranians are never seen to hold hands.

The one thing that seems less problematic in Iran than elsewhere is finance. He never asks for government funding. Tale of the Sea was funded by “two people who are fairly well off”, he says. “That is normally how I get my money. They know me. They know the films are going to be controversial. But somehow, people want to invest because they know the films don’t die.” And whatever hostilities and controls they face, there is no denying that Iran has a robust industry. At least Iranians, can see films, some of them very fine, in their own language. “But at the same time, the government is a clerical dictatorship,” Farmanara says flatly. “What can we do about that?”

The eighth annual Iranian Film Festival Australia screens in Sydney from October 18 to 23; Melbourne from October 25 to 30. For full screening details around the country, go to iffa.net.au