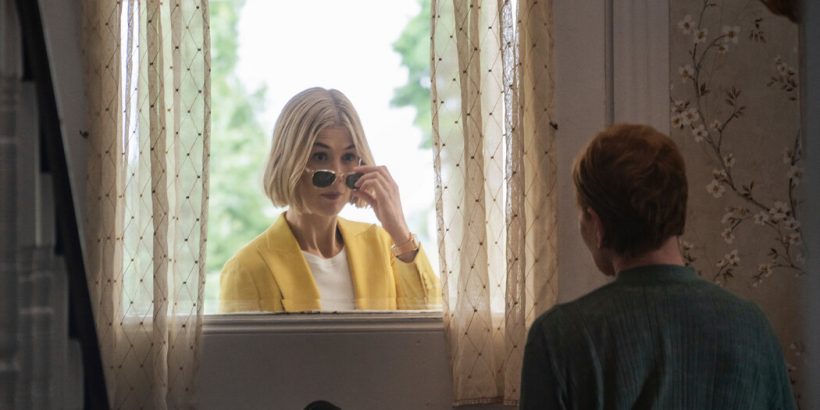 Rosamund Pike recently earned a Golden Globe for her portrayal of the cunning, utterly amoral Marla Grayson in the Netflix thriller “I Care a Lot.” Marla shrewdly, confidently games the system to con elderly folks out of their savings — until her latest victim’s son (Peter Dinklage) starts paying close attention. It is a dagger of a performance that is of a piece with the writer-director J Blakeson’s film, a “slick, savage caper” dominated by bold visual and sonic choices, and humor as black as Marla’s outfits are bright.

In a video call from his home in London, Blakeson discussed some of the photos, songs and movies that inspired him when he was working on “I Care a Lot.” 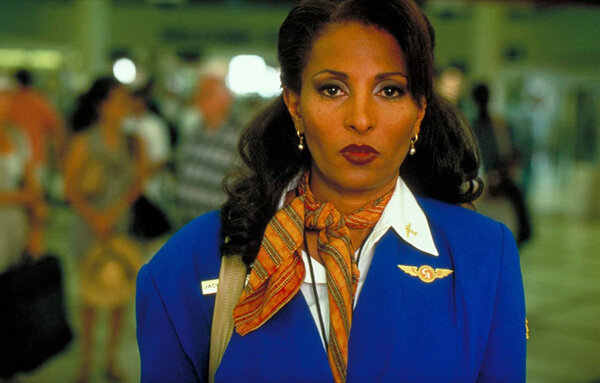 Like Pike’s Marla, Pam Grier’s title character is a smart master of the double cross and steers this vastly entertaining crime movie. “This is a film that I talked a lot about with both my cinematographer [Doug Emmett] and my production designer [Michael Grasley],” Blakeson said. “It felt like a good touchstone, tonally, for where we might end up.”

As a flight attendant, Jackie Brown spends quite a bit of the film in her uniform. “She has that blue suit that she wears and now and again you’ll see that just against this bright green wall,” Blakeson said. “The joy I get from that is similar to the joy I get from seeing some of those Godard films where you have people in bright yellow or bright red or bright blue against a neutral background, and they really pop out in this sort of Technicolor/Kodachrome palette. In ‘Jackie Brown,’ she has a job where she’s always kind of wearing the same clothes, but you get this iconic look that she carries through the whole movie. And I really wanted Marla to feel iconic and memorable as a character — a very cinematic character rather than a realist character.”

A major influence on the visual language of “I Care a Lot” is this acclaimed Belgian photographer. “It’s street photography, more or less, but the real world is really colorful and really interestingly framed,” the director said. “There’s a photograph where the yellow lines are really bright and somebody’s walking down the street wearing a brightly colored coat. It looks orchestrated, but it’s not. Our world is colorful, we just don’t see it because we don’t stop and look at it very much.”

Marla herself benefits from people not looking, which feeds her confidence. “She has big windows in her office and you can just see in; she knocks on the door of a blue house in a yellow suit,” Blakeson said. “She’s not hiding away in a dark corner — she’s doing it out in the open.”

‘Rid of Me’ by PJ Harvey

Blakeson was listening to music at the gym when the title track of PJ Harvey’s second album (1993) really hit him. “The beginning of the song is very quiet, so you’re turning it up to try to hear, and suddenly it gets to the chorus and it blows your head off,” he said. “I started thinking about somebody trying to kill Marla, and she’s not going to die. The section where she escapes from a car underwater was written in my head while I was listening to ‘Rid of Me.’ Just a basic idea of, ‘I’m not going to go away, I’m not going to be beaten.’ When she gets out of the water, she screams — it’s like singing along to ‘Rid of Me.’”

Pike asked the music-loving director to put together a list of songs Marla would have listened to as a teenager, and he included a lot of 1990s rock titles from bands like Ministry. “She sent me a text saying, ‘I think I just got caught speeding because I was listening to your playlist,’” Blakeson said.

‘Ace in the Hole’ by Billy Wilder

A longtime admirer of the director of “Double Indemnity” and “The Apartment,” Blakeson singled out his 1951 pitch-black film about a corrupt journalist, Chuck Tatum (Kirk Douglas), who exploits an accident in which a man is trapped in a cave-in, even prolonging the ordeal. “He was so mercenary, would do such disgustingly manipulative things for his own gain,” Blakeson said of Tatum. “His ambition is driving and he’s just a passenger.”

This, of course, is very much like Marla, whose ruthlessness and fearlessness fully emerge in a confrontation with Dinklage’s character. “Usually in the movies that’s where the woman is weeping and begging for her life, but Marla sees it as an opportunity to give her elevator pitch to a wealthy person,” Blakeson said. “There’s a bit in ‘Ace in the Hole’ where he’s trying to reassure the guy underground, and he’s lying because he could actually just get him out really quickly. That sort of manipulation of people is really interesting to me.”

Another photographic influence was this American artist’s meticulously staged pictures. “There is a sense of the surreal, but it is dramatic and melodramatic,” Blakeson said. “There’s a forced absurdity about it that we wanted to bring to this [film] a little bit. Like when Jennifer [Dianne Wiest] goes into the care home with those muted colors — all these nurses offering their chocolates and smiling at her, that sort of seems odd and surreal and disconcerting. Also certain moments in the scene with Peter and Rosamund facing off in the quarry. The lighting is kind of blue and red and like giallo [films] or something. We really wanted to push it.”

‘Love on a Real Train’ by Tangerine Dream

This German electronic band started off as an underground purveyor of so-called cosmic rock before bursting into the mainstream with its dreamy, repetitive contributions to such 1980s movies as “Risky Business” — where this track appears.

“‘Love on a Real Train’ makes me think of the future and the past at the same time,” Blakeson said. “You feel like there’s ambition in there: The world is going to be a better place somehow if we join the American dream.”

That feeling is echoed, often with menacing undertones, in Marc Canham’s pulsating electronic score for “I Care a Lot.” When working on the film, Canham, the composer, and Blakeson brought up the minimalist composers Philip Glass and Steve Reich, early-1980s tracks like Laurie Anderson’s “O Superman,” and more recent abstract electronic work by Aphex Twin and Orbital, but Tangerine Dream was a constant. “There’s a very dreamlike quality, which is sort of nostalgic and yearning but also kind of cold and calculating, and that’s a film about capitalism and business,” Blakeson said of “Risky Business.”

“Obviously, it’s a very different version of business than in ‘I Care a Lot,’ ” he added, laughing.