It’s no secret that John Krasinski wore a lot of hats during the making of surprise blockbuster hit A Quiet Place.

The filmmaker not only co-wrote and directed the movie about a family hunted by sound-sensitive aliens, but also had a leading role alongside his real-life wife Emily Blunt.

But fans probably didn’t spot him in another crucial role. During an appearance on Jimmy Kimmel Live! this week to promote his Amazon series Jack Ryan, Krasinski revealed that he did the motion-capture acting for the aliens in A Quiet Place as well.

“Nobody knows it because I’ve kept it quiet,” Krasinski quipped in a nod to the film’s title.

The actor and filmmaker explained to Kimmel that he never originally intended to do all of the motion-capture work himself, but his demonstrations impressed the special effects wizards at Industrial Light and Magic.

“I said, ‘Well, this is how I think he’s gonna crawl,'” The Office star remembered. “And they said, ‘Well, why don’t you throw on the suit?’ And I was like, ‘Totally!’ 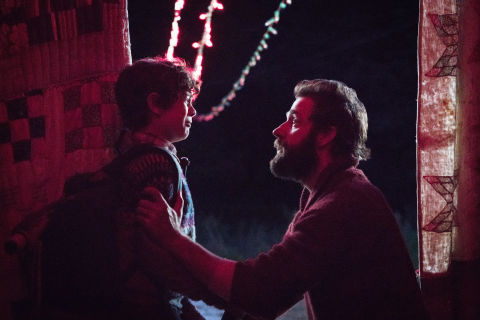 “Then they took that picture and I thought I was auditioning for Lion King. The commitment level was very high.”

We imagine Krasinski will put that same level of commitment into the upcoming A Quiet Place since he started developing ideas for it even before it was officially greenlit by Paramount Pictures.

The untitled A Quiet Place sequel is currently scheduled to arrive in cinemas on May 15, 2020.