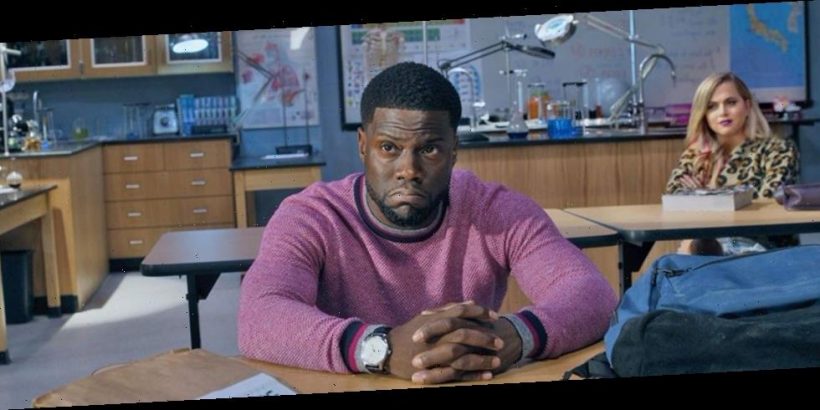 So much for a sharp pivot towards action for longtime comedy star Kevin Hart. The Jumanji: The Next Level star has lined up his next comedy role, reteaming with his Night School writer John Hamburg for a new Netflix comedy called Me Time.

At this point, we’re all familiar with Kevin Hart’s schtick. He’s short, he’s short-tempered, and he’s got a bouncy energy that has served him well in his long career of starring in broad buddy comedies. But the actor had recently started to make attempts to break from his typecast, stretching out his dramatic chops in the inspirational drama The Upside, and signing on to play a stoic soldier in the Borderlands feature adaptation. However, it seems Hart still remains staunchly loyal to the genre he’s best known for, setting up his next comedy at Netflix with Me Time.

According to The Hollywood Reporter, Hart is starring in Me Time, a Netflix comedy written and directed by John Hamburg, who wrote Hart’s 2018 comedy Night School. Hamburg, best known for writing the Meet the Parents films and directing Along Came Polly in the early 2000s, writes, directs, and produces Me Time.

Per THR, Me Time follows “a stay-at-home dad who finds himself with some ‘me time’ for the first time in years while his wife and kids are away. He reconnects with his former best friend for a wild weekend that nearly upends his life.”

There’s no news on who will be cast Hart’s former best friend, but a good guess will be another comedian known for playing wild-card characters while Hart plays the straight man. Perhaps to complete the Night School reunion, Netflix might cast Tiffany Haddish, who more than excels at playing wild, over-the-top characters, having made her breakout performance doing exactly that in Girls Trip. The pair’s dynamic in Night School was apparently a big hit, bringing the comedy movie to a $100 million box office total in 2018.

Me Time falls under Hart’s recent deal with Netflix, under which the actor is contracted to star and produce in at least four feature films for the streamer, as well as establish a first-look deal. Hart is also producing Me Time with Bryan Smiley and the duo’s HartBeat Productions. Lauren Hennessey will also exec produce as will Joe Gatta.