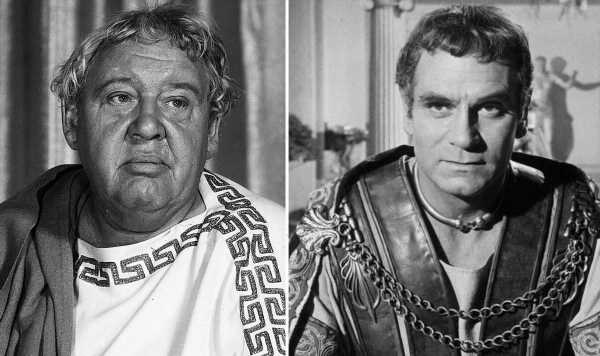 Spartacus boasted an extraordinary array of stars. The 1960 Roman epic also featured Tony Curtis alongside Kirk Douglas in the title role and Jean Simmons. The film shoot was rife with explosive confrontations between its leading man and director Stanley Kubrick, as well as Douglas and Laughton. The latter’s feud with fellow Oscar-winning thespian Olivier already pre-dated the making of the film and provided great entertainment for Ustinov. Interestingly, despite the egos and achievements of the two older actors, it is Ustinov who ended up with two acting Oscars. The other two legends both won a single one, Olivier from nine nominations – his other three were two honorary Oscars and one Best Picture.

It was Douglas who gathered such an impressive cast together. He had been bitterly disappointed at losing out on Ben-Hur to Charlton Heston and created his own epic, based on the novel by Howard Fast.

Douglas should have had an inkling of all the troubles ahead from his initial attempts to woo two of teh UK’s pre-eminent stage and screen actors. He recalled the bumpy starts in his book, The Ragman’s Son.

Douglas wrote: “Wouldn’t it be miraculous if we could get Sir Laurence Olivier, Charles Laughton and Peter Ustinov to be in our movie? Laughton was doing a play in London. We went backstage to see him, Charles turned to us and said, ‘I glanced at the script. Really, a piece of s**t.’ We left very depressed.”

Douglas added: “Larry and his wife, Vivien Leigh, lived nearby. Vivien was not well emotionally. Everyone pretended there was nothing wrong, in spite of her strange behaviour.

“In a restaurant one day with a group, she turned to Olivier and said, ‘Larry, why don’t you f*** me anymore?’ Then she started coming on to me, very seduc­tive, with Olivier sitting right there.”

Their marriage was on its last legs (they divorced in 1960 after the film was released) and its spectre hung over the actor during the long and arduous Spartacus film shoot.

Laughton was never happy with the script by Donald Trumbo, and Ustinov was used to rewrite his scenes. Even so, he constantly harangued Douglas on set.

He recalled in his autobiography: “With shooting in progress, Charles Laughton, Gracchus in my epic movie Spartacus, was threatening to sue me and I was laugh­ing hysterically. Charles looked at me strangely. As he waddled out, sputtering, I called, “Go ahead! Sue me! What the f*** do I care!” I never did find out why he wanted to sue me.”

Olivier once famously said of his fellow thespian: “I’m not a genius. There’s no room for genius in the theatre, it’s too much trouble. The only actor I ever knew who was a genius was Charles Laughton. Maybe that’s why he was so difficult.”

Despite his calm appraisal of Laughton’s character, it didn’t stop him from provoking him on set.

Ustinoc recalled: “For some reason – like animals – they just didn’t like each other. When you get two dogs that growl at each other, you don’t really ask why, you just accept it.

“But Olivier knew that Laughton was going to appear at Stratford in England as King Lear and tried to make up for this atmosphere by giving Laughton a little diagram with crosses on it and saying, ‘Dear boy, I’ve marked here the areas on the stage from where you can’t be heard.’

“And Laughton was delighted. ‘Thank you so much, Larry. I shan’t forget that. Oh, you are kind.’ And as soon as Olivier was out of earshot Laughton turned to me and said, ‘I’m sure those are the very areas from which you can be heard.’

So there was really nothing to do. But I wasn’t foolish enough to suggest that they should think again.