Mila Kunis plays a successful career woman who faces a horrific incident from her past in this drama based on the novel by Jessica Knoll. 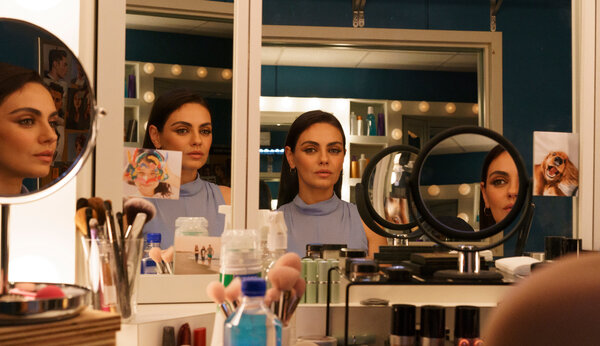 To become the “Luckiest Girl Alive,” a title this dramedy shellacs with sarcasm, a self-loathing magazine writer named Ani (Mila Kunis) has achieved a trifecta of status symbols: a prestigious education (acquired via scholarships), a slim body (acquired via an eating disorder), and a posh fiancé (acquired via emotional suppression). Marriage to blue-blooded Luke Harrison IV (Finn Wittrock) will cement her transformation from teenage pushover TifAni FaNelli (played in flashbacks by Chiara Aurelia) to her intimidating new identity as Ani Harrison — that is, if she can restrain herself from fantasizing about stabbing her husband-to-be in the neck.

“Snap out of it, psycho,” Ani growls in the first of many harsh monologues that run the length of the film. Her fanged narration sets us up for a makeover movie in reverse where a carb-fearing perfectionist allows herself to enjoy pizza. In part, it is that movie. But readers of Jessica Knoll’s novel of the same name, which she here adapts for the screen, know that Ani is reeling from a high school gang rape compounded by a mass shooting. These intertwined tragedies rebranded one of Ani’s abusers, played as a student by Carson MacCormac and in adulthood by Alex Barone, into a grandstanding public moralist. At the same time, her own labels make her itch: survivor, victim, villain, hero, slut. Ani wears success like a bulletproof vest, until run-ins with her mother (Connie Britton), her former teacher (Scoot McNairy) and a documentarian (Dalmar Abuzeid) force her to re-examine her facade.

Kunis’s alpha female appears at once ferocious and like a conspicuous sham. (Imagine Sheryl Sandberg as a “Scooby-Doo” villain.) Her performance carries the film — a fortunate break for the director Mike Barker, who has the near-impossible challenge of shepherding the tone from snark to painful sincerity. Too often, Barker resorts to shooting pat scenes of Kunis staring at herself in a mirror. Yet, he and the cinematographer Colin Watkinson also capture Ani’s callous gaze in glimpses, say when a crumb on the corner of Abuzeid’s lip symbolizes her suspicion that she can’t trust this klutz as her mouthpiece.

It’s initially baffling that Knoll pointedly sets the film in 2015, the year her book was published. (What for? A one-liner about Hillary Clinton winning the presidency?) Still, Knoll took another year to speak openly about how Ani’s trauma overlaps with her own, and today, her script serves as a reminder of that recent history right before #MeToo, when strength passed for healing and misogyny hid behind a smile that sneered, Can’t you take a joke?

“Yes,” Ani might counter — and she’s absorbed so many punch lines that, like the culture at large, she’s poised to explode.