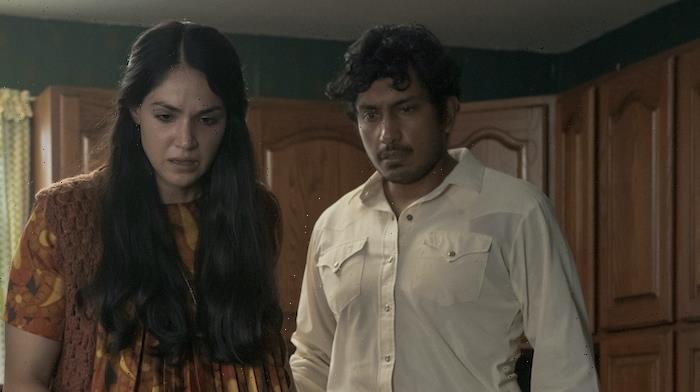 Yesterday, Amazon Prime Video and Blumhouse announced the next installment of their Welcome to the Blumhouse film series with four original thrillers from a diverse slate of filmmakers. The films – Bingo Hell, Black as Night, Madres, and The Manor – will premiere worldwide this October exclusively on Prime Video.

Set in the 1970s, Madres tells the tale of a young Mexican-American couple, Beto and Diana, who are expecting their first child. They move to a small town in California where Beto has been offered a job managing a farm, but things don’t go as smoothly as they’d hoped. Madres is a story of isolation, the horrors of motherhood, and survival as a second-generation immigrant in America.

The Perils of Pregnancy

Madres is part pregnancy horror, as one of our heroes, Diana, is very pregnant when the story begins. She discovers a curse targeting expectant mothers plaguing the town, and must try to end it for the sake of herself and her unborn child. As the official synopsis describes:

Beto (Tenoch Huerta) and Diana (Ariana Guerra), a young Mexican-American couple expecting their first child, move to a small town in 1970’s California where Beto has been offered a job managing a farm. Isolated from the community and plagued by confusing nightmares, Diana explores the rundown company ranch where they reside, finding a grisly talisman and a box containing the belongings of the previous residents. Her discoveries will lead her to a truth much stranger and more terrifying than she could have possibly imagined.

Diana is a newspaper reporter, and she uses her skills to uncover what’s happening to her and the other women. As director Ryan Zargoza told us:

“I think Diana’s such a compelling character. I think she represents this great balance of vulnerability and being a pregnant woman who’s isolated from her support network, her family and friends, and moved to this new town. And now she’s just completely alone, stuck in this community who doesn’t really embrace her the way that she was hoping, and with a husband where problems are starting to arise, and she’s starting to experience these crazy visions. And despite all of this, she shows like a tremendous amount of strength and trying to connect with the community, trying to get her husband to see her side of things, and ultimately trying to solve the curse that’s plaguing women.”

One thing that drew Zargoza to the project was the 1970s setting.

“I really loved that this was an opportunity to kind of pay homage to the horror films that always spoke most to me, which come mostly from the seventies,” he said, continuing:

“I’m a huge Kubrick fan, and The Shining and such amazing film for a lot of reasons. But I really got a chance to dive into the visual language of The Exorcist, The Omen, Rosemary’s Baby, Repulsion, even Jaws. And they all had this, I don’t know, it was a rhythmic quality that the camera always acted as a character in itself. The blocking was always done in such a way that it just… You gained so much more information when I think the filmmaker made their choices with purpose. And so I tried to do that with this film where it takes place in the seventies, so it felt appropriate to try and make it so that it seems like this film was made in 1979.”

Using the camera as a character gave Zargoza the opportunity to reveal information in unique ways. He called the film a “slow burn psychological thriller” with supernatural elements, but noted that fans of ’70s horror films should be especially excited for this vintage-looking vision.

One thing the Welcome to the Blumhouse collection aims to do is share the voices of more diverse creators. Zargoza is Mexican-American himself, and brought his experiences as a second-generation immigrant to the film. He noted that there are things within marginalized communities that never get discussed on a larger scale, and this movie gave him an opportunity to explore some of those.

“One of the things that drew me to that script was the idea that I didn’t speak Spanish, and that is such a interesting part of the Mexican-American experience and such a debate within the community of whether you can call yourself Mexican if you don’t speak that language,” he said:

“And one of the themes that we explore is cultural identity and having a conversation about what it means to be not a Mexican, not an American, but a Mexican-American. And I found a great opportunity to express some of my own views in the story and explore how second generation Mexican-Americans, and just immigrants in general, try and navigate what it would it feels like to be in this country where you’re just trying to find your place in the world.”