OK, so maybe hardly anybody was there when he performed The Beatles' All You Need Is Love while filming a climactic scene for the new romantic comedy Yesterday – tens of thousands of screaming fans would be added later, courtesy of movie magic. And he couldn't really rock out that hard because of local noise regulations.

Still, it was a surreal and thrilling experience for the up-and-coming British actor on his path to total Beatlemania. "I guess I'm probably one of the few guys who can say I played to an empty Wembley Stadium," Patel says. 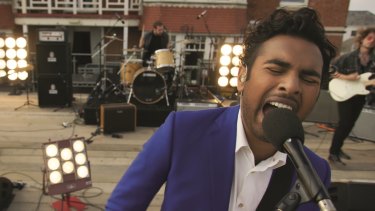 Jack Malik (Himesh Patel) wakes up in a world where the Beatles never existed in Yesterday.

Director Danny Boyle's Yesterday casts Patel, 28, as Jack Malik, a struggling singer/songwriter who can't get anybody to pay attention to his music. That all changes after he's hit by a bus during a massive worldwide blackout: Jack discovers he's the only person who remembers the Fab Four and becomes an overnight success passing off great Beatles songs as his own.

Patel's musical journey included two-and-a-half months of perfecting Beatles tunes and singing live while cameras rolled. Among the "nerve-wracking" highlights were doing Help! on a hotel roof in front of 6000 people and crooning The Long and Winding Road in a songwriting duel between Jack and Ed Sheeran (who plays himself).

Here's what else Patel's new fans should know about the relatively unknown actor and his film debut:

He wasn't a huge Beatles nut growing up.

Patel figures Yesterday had "the best prep period" ever since it was just him listening to all of the group's albums, "which is nothing but a joy". It also made up for a lack of their influence in his childhood: his parents arrived in Britain from India soon after The Beatles split in 1970, "but that wave had kind of ended," Patel says. His family was more apt to have South Asian and Bollywood playing around the house, though John Lennon's Imagine is his mum's favorite song. (Because the tune is from John's solo career, Patel doesn't sing it in Yesterday, though "we added a lovely touch" to the film to reference it.) 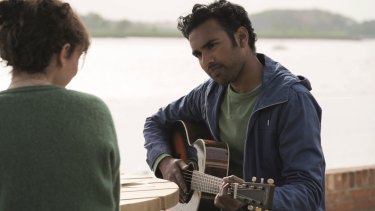 George Harrison is his favourite.

While Lennon, Paul McCartney and Ringo Starr all "have really great qualities", Patel feels most of a connection with George Harrison because of his fascination with Indian culture and Hinduism. "It was part of my identity that I felt like I struggled to share with people growing up in the UK as a teenager," Patel says. "Whereas here was this man who popularised it in some way and brought it to the masses back in the '60s, introduced people to the sitar and that level of spiritualism."

He weathered an early crisis of confidence.

In his teens, Patel sang in school choirs and plays as well when doing youth theatre, where he'd often have "solo bits". One unfortunate incident (an ironic one in hindsight) occurred when doing Let It Be and his singing teacher singled him out to do the second line in the chorus, which was just out of his range. (Thanks, puberty.) "My voice just squeaked it. It sounded like an alarm going off, and I remember just being mortified," Patel recalls. Hopefully she'll hear him get it right on the Yesterday soundtrack: "Look, I did it! We got there, eventually." 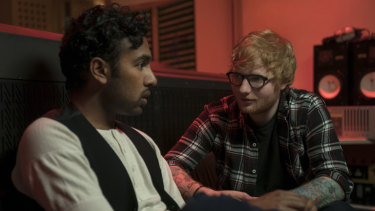 Himesh Patel, left, and Ed Sheeran in a scene from Yesterday.Credit:AP

He has diverse music tastes (but is now quite the Ed Sheeran fan).

Patel's personal playlist includes the Black Keys, Radiohead, Muse, James Blake, Australian singer/songwriter Matt Corby and British-Indian world musician Nitin Sawhney, who was "a big one" for Patel as a teenager. He also has a new respect for co-star Sheeran, whose own backstory as a toiling musician from a coastal English town is a basis for Yesterday. During rehearsals, Patel went to one of Sheeran's stadium shows and "watched him stroll up in front of 70,000 people and just play. He does it so humbly and he's never anything but himself."

He will next share the screen with an Oscar winner and Olaf.

Patel's career is taking off – quite literally when you consider his next movie, the adventurous biopic The Aeronauts, about the hot-air balloon exploits of scientist James Glaisher (played by Eddie Redmayne). Patel's also teaming with Frozen star Josh Gad and Hugh Laurie for the upcoming HBO sci-fi comedy Avenue 5. And just in case Yesterday kicks off "Himeshmania", Patel wants everyone want to know that he's "just a bloke. We have this thing of idolising and putting people on pedestals, but really we're all people. Some of us are lucky enough to get to do this kind of amazing thing."