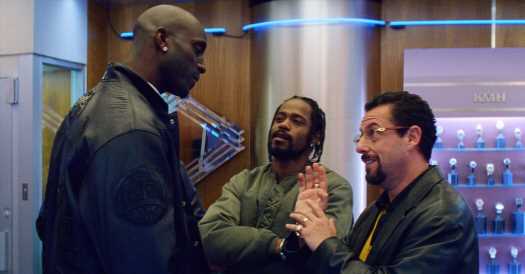 Does every N.B.A. superstar really want to be in movies? You might think so, judging by the long and checkered history of players going Hollywood (not to mention the amount of flopping in today’s game). As the newly released “Space Jam: A New Legacy” takes the booming subgenre of films built on hoops talent into the era of remakes, here’s a guide to the best and worst performances by pro basketball players, starting in the 1970s.

If we are to believe this goofy 1979 movie — and why not? — basketball at the height of disco meant players doing the splits to celebrate buckets, coaching by astrology and Dr. J as the coolest man alive. Much of his mellow performance is shot in slow motion, adding to its swagger. In one scene, he seduces a woman by taking her to a playground and dunking in street clothes by himself in street clothes. In another, he enters a game by hot-air balloon, wearing a glittery silver uniform, backed by funky soul music. If John Travolta had a sports counterpart, this was it.

In this easygoing drama about a coach (played by Gabe Kaplan at the height of his “Welcome Back, Kotter” fame) who builds an underdog college program, the Knick star Bernard King delivers an understated, lived-in performance as a pool hustler with a silky jump shot. He keeps up with an ensemble of actors without outshining them too much on the court. Compared with the hectic video-game aesthetic of “Space Jam,” this character-driven movie feels refreshingly human.

There is no more famous jock cameo than Kareem Abdul-Jabbar playing himself pretending to be an ordinary commercial airplane pilot. The idea that the seven-foot superstar could disguise himself even after being challenged on it by a young fan is one of the countless jokes in this classic comedy. But when his frustration is supposed to turn into anger, Abdul-Jabbar can’t transcend his coolly unflappable stoicism.

In the greatest basketball movie of all time, this five-time all-star makes a brief but electric appearance as a guy enraged after getting hustled out of money, clearing the courts by swinging a knife around in ineffectual rage. It’s so convincing that you would never know he became famous for basketball, not acting.

Stream it on Hulu and Paramount+.

This unsung morality tale about a Bobby Knight-like college coach (Nick Nolte, crusty as ever) tempted into corruption is filled with performances by famous players (Shaquille O’Neal, Larry Bird) and coaches (Rick Pitino, Knight). They all capably play versions on themselves, but the revelation here is the Boston Celtic great Bob Cousy, who transforms into a morally ambivalent athletic director. It’s a startlingly assured performance from a Hall of Famer from the early years of the N.B.A.

Stream it on Disney+.

Shaq is the most charismatic big man in history, funny in cameos and as a talking head, but as the star of his own movie, his track record is more like his foul shooting. The year before he would make one of the most forgettable DC superhero movies (“Steel”), he delivered this much-mocked performance as a rapping genie in this schmaltzy fantasy. Trying to grant the wishes of a blandly likable white kid with divorced parents, he lumbers through, shouting his lines, mugging and even burping for laughs.

Despite winning three Razzie Awards for this Jean-Claude Van Damme flop, Dennis Rodman is actually a plausible action star. He convincingly kickboxes, looks good in flamboyant get-ups (lots of hair die and leather) and wryly delivers corny lines riffing on his persona. (“You’re crazier than my hairstylist.”) All of this movie’s camp humor comes from the glint in his eye, which he needs when delivering one of many basketball references, despite the fact that he’s not supposed to be a player but rather an extremely tall arms dealer.

Ray Allen, ‘He Got Game’

Making your major movie debut opposite Denzel Washington must be as daunting as entering the pros and guarding LeBron James in your first game. Exuding innocence and quiet charisma, Ray Allen, in the meaty role of Coney Island basketball prodigy Jesus Shuttlesworth, accounts himself well, even if you never forget he’s moonlighting. He’s persuasive as a diffident, paralyzed high school star with buried anger at his father. It’s a role player of a performance that executes the game plan skillfully, occasionally with panache.

At 7 foot 7 inches, the Romanian center Gheorghe Muresan was the tallest player in the history of the N.B.A. That was enough for a solid pro career, even if his skills, especially early on, were unrefined. But for amateurs, acting can be tougher than sports. In this Billy Crystal buddy movie, he’s stuck in a slump. It can be hard to understand him (English is not his first language), and in his reaction shots, he might hold another record: least expressive star in the history of comedy.

When it comes to movies starring Brooklyn Nets, “Uncle Drew,” featuring Kyrie Irving, is flashier and funnier. But there’s nothing in it as impressive as Kevin Durant pretending to be awful at basketball in this rigorously wholesome “Freaky Friday”-like movie in which he accidentally trades talents with a clumsy high school kid. A common trope for this genre (“Space Jam” also includes a plot point with N.B.A. stars losing their skills), Durant really commits to being bad, adjusting his form in subtle and consistent ways. It’s a cringey delight to watch this perfectionist trip making a crossover, airball a dunk and miss his patented midrange shot, over and over again.

You know that old guy on the playground who everyone underestimates because he looks slow and out of shape, but then dominates the game through wily moves and sneaky change of pace. Kyrie Irving’s performance is an affectionate ode to this figure, right down to the sweatpants. Most current stars moonlighting in movies perform versions of themselves, so it’s a bold move for Irving to try a completely different character, doing a nice job shifting his posture to a hunch and affecting a weary voice. And if he seemed a little stiff, it’s not easy to act underneath such an elaborate makeup job.

Stream it on Netflix.

On-court personality usually doesn’t translate to the screen, but this is a notable exception. Playing an amped-up version of himself, Kevin Garnett was as intense and ferocious getting in Adam Sandler’s face as he was with Patrick Ewing.

Michael Jordan has enough star power to light up a commercial or a “Saturday Night Live” sketch, but his wooden acting needed the animation of Bugs Bunny to make the original Tune Squad a powerhouse.

Who’s better: M.J. or LeBron? This endless sports-talk debate over the greatest ever usually focuses on stats amassed and rings won, but now we have another metric to argue over: Who is the best — or more precisely, least terrible — lead actor? It’s close, but James gets the edge, showing more range playing opposite cartoons, pretending to be the overbearing sports dad along with the goofy big-kid corporate hero, even tapping into sloppy sentiment that Jordan reserves for meme-able Hall of Fame inductions.