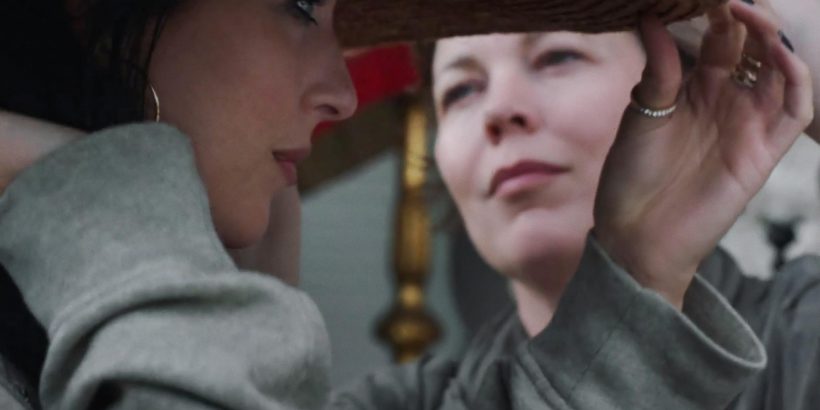 “Once,” writes Elena Ferrante in her 2006 novel The Lost Daughter, “I had a very closeup view of what it means to be in love, the powerful and joyous irresponsibility that it unleashes.” In the span of a sentence, Ferrante — in the voice of heroine Leda Caruso — renders love into something exuberant and also, not paradoxically, reckless and unyielding. It is powerful (a morally neutral term) and encouraging of the irresponsible (not so neutral); it “unleashes” impulses that cannot be contained while also, because of its joy, making the person in the throes of that love hesitant to temper it. In Ferrante’s hands, love has a way of amounting to work, and half the battle is keeping a tight grip on the reins. Her heroines often crave, against what’s expected of them as mothers and sisters and daughters, to loosen their grip — a desire as exciting as it is terrifying.

That’s Ferrante. It’s where this mysterious, adamantly ambivalent author focuses the energies of her fiction. An adaptation of her work can muss the finer details of her plots or rearrange things to make them more adaptable to screen, cutting characters, deploying cinematic devices not used on the page. But capturing this wavering feeling about love, crystallizing what feels like a dangerous proposition — the sense that love in itself isn’t always so easy to love; that the irrationality that defines it is as attractive as it is noxious — is essential. It’s the assignment.

Maggie Gyllenhaal’s The Lost Daughter — currently in theaters and set to start streaming on Netflix on Dec. 31 — gets this last part right, which nearly obviates almost any additional compliment, because this is the hardest part. There are plenty other garlands to lay at its feet; a cast headlined by the likes of Olivia Colman, Jessie Buckley, Dakota Johnson, Dagmara Domińczyk, and further buoyed by a robust supporting lineup ranging from Peter Sarsgaard and Ed Harris to Normal People’s Paul Mescal — well, such cast speaks for itself, if it’s good acting we want. But Ferrante merits more than good acting. What Gyllenhaal manages to bring to screen in her feature directorial debut is that thing that makes your stomach coil from the opening pages of Ferrante’s novels, that rapturous tug of irony and ambivalence pulling us into a realm of vulnerable, conflicted, plainspoken feelings. Again, Ferrante, by way of Leda: “The hardest things to talk about are the ones we ourselves can’t understand.” Yet Ferrante understands.

And so, if her film is any indication, does Gyllenhaal, who, with Colman as Leda, gets that Ferrante feeling churning almost as soon as the film starts, when Leda arrives at the coastal villa that will be her home for the coming summer weeks. But she’s arrived later than expected, and being that she’s a scholar for whom vacation is always a chance at catching up on work, her bags are full of books. They’re heavy — but isn’t baggage always? What this means in the immediate sense is that Lyle (Harris), who looks after these grounds, has not only been waiting around for Leda: Her heavy bags are putting him to work. Already, in the span of a short scene, the drama’s got an uncomfortable itch to it, with Leda being led up to her apartment and looking around at her rooms with a wandering expression that could be pleasure or disappointment or simply the exhaustion of having to interact with someone in the immediate wake of a long trip — as Lyle, poor Lyle, older and out of breath, expresses curiosity about this woman, his sleeve heavy with uncertainty over what a man like him might mean to a woman like her.

It all amounts to hardly a fuss. But there’s a tinge of uncertainty — a tremble of possible tension. That barely-expressed something trails Leda down onto the beach the next day, when a large, raucous clan — the local overlords of this until-now quiet, relaxed domain — takes ownership of the beach with its noise and antics, its flock of whining kids and strutting young men. It’s not all bad. There’s the very attentive younger beach-keeper, Will (Mescal), catering to Leda’s needs with ice cream and shade and unlikely flirtation, which, even if it amounts to nothing, feels good. And then there’s the image that transfixes Leda most keenly: a younger woman, Nina (Dakota Johnson), and Nina’s young daughter, who’s of the age that her primary purpose is to inspire permanent parental fatigue. Nina’s short patience bears all the marks of a woman for whom motherhood was perhaps not in the cards. Leda’s gaze, meanwhile, carries with it the distinct tinge of a woman who can more than relate — who’s been there.

The Lost Daughter is a drama that spirals out from an unexpected incident — the kind of everyday mixup that, in the right hands, amounts to a clarifying fissure in the lives of all involved. First comes an already fraught day on the beach when first Nina’s daughter, then the young girl’s doll, go missing. Leda, who’d gotten herself into the family’s bad graces by amounting to an interloper, gets on their good side when she helps comb the beach to find Nina’s daughter. It’s only later that she realizes she — out of some impulse she wasn’t even aware of, the kind of impulse on which the bones of Ferrante’s narratives are built — has taken the young girl’s doll.

Gyllenhaal’s film, which the director adapted from the novel herself, makes good on the promise of Ferrante-style psychologizing, which is to say, it takes the novel’s first-person moseying through association and event and offers us an analogous series of repetitions, flashbacks, echoes — all of the things that amount to internal reflection, doubt, and a nearly neurotic aptitude for self-analysis. Ferrante’s heroines are constantly thinking through their experiences; Gyllenhaal’s Leda, brought to life with an exquisite level of attention by Colman, is always thinking, too. Colman gives us a woman whose gaze is always up to something — and flashbacks to earlier moments in Leda’s own life, her own fraught experience with motherhood, offer the raw material for what lurks behind the understanding in her eyes. These beach visits threaded throughout the movie become cause, seemingly always, for startling psychological event: inner drama to match the outer drama of Nina’s rude, roving family — the men with their tattoos and jeers and loudmouth ruckus, and most especially, the troublemaking aunty, Callie (an unforgettable Domińczyk), with her blunt sense of suspicion, her inability to ask a casual question without the moment feeling like an interrogation.

Through it all, there’s Leda, trying to get her work done, escaping — you sense — wherever it is she came from, which is another thing lurking behind those eyes of hers. In one sense, this is normal movie-psychology stuff, the linking of event to precedent by way of leaps back in time. But the structure Gyllenhaal has found here is key, deviating as it does from the book where necessary to heighten the suspense of what otherwise feels like a normal-enough situation, dredging up the anxieties so familiar to Ferrante’s work through a careful visual network of eye-lines, and distance, and time. The Lost Daughter teases apart the present tense through its slow reveal of the details of Leda’s time as a young mother, partnered, with two daughters and a promising academic career, whose inability to balance her daughters’ needs with the promise of her own future is, the movie makes clear, a source of guilt and regret. The Leda of that period is played, quite wonderfully, by Jessie Buckley, whose performance draws the through line from young Leda to the present-day Nina — not because these women are much alike, but in order to help us see what Colman’s Leda sees when she stares at Nina as she does. It’s Nina’s impatience, in particular, that reminds her of herself. The wistfulness in Colman’s eyes increasingly makes a sad, culminating sense.

This isn’t a story about growing older and wiser, however. For one thing, Leda’s life is populated by flirtations. Take, for example, Will. Paul Mescal has one job in this movie — to charm the pants off a maybe-lonely, but not desperate, older woman. Suffice it to say, he succeeds. But is it Leda he wants, or something beyond the confines of these villas and the family that rules them? And what about the older Lyle? Leda’s popular, what can she say. Colman and Buckley both find ways to fold her intelligent sexiness into the more tattered realms of the character quite convincingly — which is to say, Leda gets hers.

And gets in trouble. One of the more incredible things about her is, in fact, her impulsiveness, whether romantic or otherwise. It isn’t in Ferrante’s nature to reduce the remaining story to a punishment for those choices, or at least not to a punishment from on high, motivated by the author or filmmaker. No, these women do enough self-punishing on their own. Smartly, and almost unbearably, The Lost Daughter is something of a stealthy thriller — because that damn doll is missing. And Leda has it. You know the movie is working because of the panic you feel every time it’s almost made known to someone else that she does. And you know it’s working furthermore because of what this revelation means for other people: the way it’s as if the veil has suddenly dropped and, out of nowhere, here appears this monstrous woman, who’s done something — not awful; it’s not as if she’s killed someone. But it’s unforgivably strange.

It’s cliché to ascribe to actors-turned-directors a unique “way with actors,” but it’s also, often enough, true. Gyllenhaal reminds us of how true it can be. The visual ethos of this film depends, yes, on the beauty of the coast, on the simplicity of its interiors, and the familiarity of it all — you feel, after a while, like you know this beach, you know this tiny coastal town, know where it buries its secrets (of which Gyllenhaal makes you believe there are plenty).

But the movie wouldn’t be nearly as effective as it is without Gyllenhaal’s knowledge of her actors’ faces. She gets Dakota Johnson (more than most!). She gets Mescal, Buckley, Harris, Oliver Jackson-Cohen, Sarsgaard, her husband of nearly 13 years, of course. Alba Rohrwacher has a small role, but the depth of the impression it makes within the visual language of the movie — a movie, it should be said, whose central visual conceit is women looking at each other, searching each other, deploying what at times feels like laser vision, hostile and not — cannot be understated. She understands Colman, too — who’s in top form here, and knows it. Colman brings Ferrante’s creation to life with all the withering pathos she deserves. Gyllenhaal catches it handsomely, awe-struck, as if even she didn’t know how painfully real this woman Leda could seem or, in Colman’s hands, be.