In the world of movie make believe, it is sometimes hard to buy into the reality of a moment when you're inside the camera, and all of its trickery is laid bare. And yet actors often reflect on the intangible power of certain moments.

Of seeing Doctor Who's police box time machine for the first time. Of holding a lightsaber in Star Wars. Or of the intimacy and power of Queen Elizabeth's coronation in The Crown. Crafted well, they are moments charged with history and great poignancy.

For Ryan Gosling, who plays the famed astronaut Neil Armstrong in Damien Chazelle's stunning lunar landing drama First Man, that moment came as he climbed down the ladder of the Apollo 11 lunar module, re-creating for the camera the first moment a human being set foot on a heavenly body.

As he took each step down the ladder, Gosling recalls the experience as surreal.

"Even more so because I was listening to the actual [mission control] comms while I was doing it," Gosling tells Fairfax Media. "So we pulled out Neil's dialogue. But I would hear Buzz Aldrin above me on the lunar module, I could hear mission control. We were, in a sense, talking to each other except then suddenly there would be a space and I would say what Neil had said. 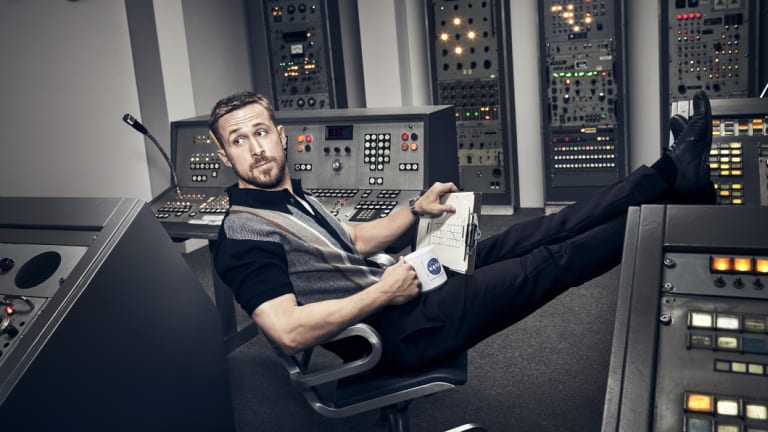 First Man is based on the book First Man: The Life of Neil A. Armstrong by James R. Hansen, and explores the years leading up to the Apollo 11 mission in 1969 through the prism of the astronauts, including Armstrong, Ed White (Jason Clarke), Buzz Aldrin (Corey Stoll) and Elliot See (Patrick Fugit), and their wives, including Janet Armstrong (Claire Foy), Pat White (Olivia Hamilton) and Marilyn See (Kris Swanberg).

We are discussing the film in the most appropriate of circumstances: the NASA facility at Cape Canaveral in Florida. It is the night after a screening of the film and we begin on the point that while some see in First Man a great space adventure, it is equally a touching and, at times, heartbreaking exploration of love and loss.

"I think I didn't realise how close to death Neil lived his life," Gosling says. "And I didn't realise how much loss he experienced in his life. When I learnt that, I thought it couldn't be true. And the more people I spoke to, the more I realised that it is true … that he never spoke about that loss. I don't know why I find that so heartbreaking. But I do."

That sense of loss, Gosling says, became a touchstone for the character and "seemed to sort of resonate throughout everything I learnt about him; he also has such a ferocious mind, an insatiable appetite for knowledge and answers.

"I can't imagine that, put in this position where you can't find meaning in this loss, and given the opportunity to look for answers in the universe if the Earth can't provide them, that it would not, in some way, permeate its way into these missions," Gosling adds. "Maybe not be the impetus of them, but be present in some way." 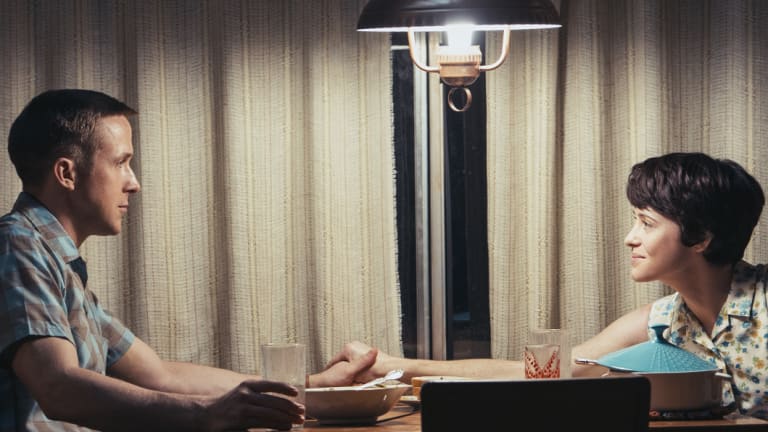 Their last partnership produced La La Land which was, one Oscar envelope gaffe aside, a truly remarkable film. And if early buzz is accurate the band has been successfully pulled back together on First Man; the film premiered at the Venice Film Festival and won almost universal praise from critics.

First Man is properly transporting. Whether it is in the intense, almost overpowering roar of the lunar launches, in which Chazelle takes the audience into the improbable madness of sending a human crew to space in a pin-prick sized capsule stuck on the top of a giant firecracker which has been aimed skyward. In hindsight it seems to be a dream as absurd as dropping a trampoline-sized Mentos into an airplane-sized bottle of Diet Coke.

But there is also, in the vastness of space, a tenderness to Chazelle's storytelling, which taps both the insignificance of our own tiny planet in the context of the greater universe, and also the magnificence of people who dreamed of taking humankind to another world. 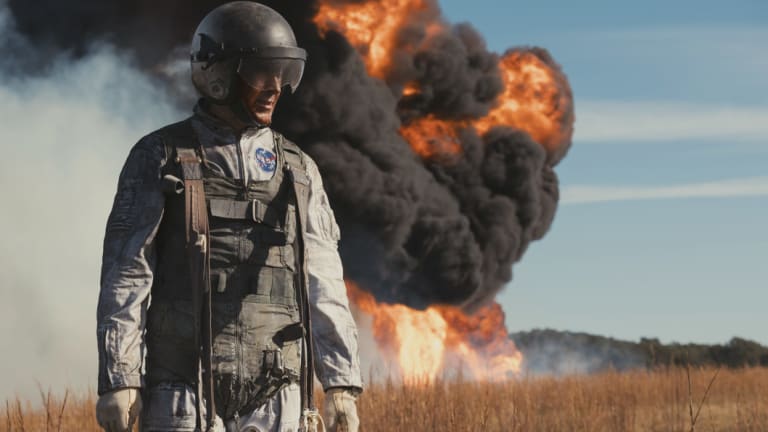 It echoes, I suggest, of a line from the Mel Brooks comedy Young Frankenstein – an admittedly unlikely point of comparison for a film such as First Man – when Gene Wilder declares his ambition to challenge common sense and "hurl the gauntlet of science into the womb of impervious creation herself".

"That's a great line," Chazelle says, smiling. "And [the astronauts] sort of occupy a unique position for all of humanity. In the period of history that we look at in the movie, when the whole idea of an astronaut was so brand new, I think it's why there's such an aura of sort of God-like mythology around Neil Armstrong, in particular, and his missions."

For Gosling, Armstrong was an enigmatic figure who needed to be deconstructed and properly understood.

"It takes a certain kind of person, many of them were test pilots, to get into an aircraft that's never been flown and intentionally push it to its breaking point just to further our understanding of aeronautics," Gosling says. "And they all have in common this sense … we're not trying to confirm their beliefs, but disprove what we think we know, in order to really find the truth.

"There is a line in the film, we have to fail down here, so we don't fail up there … [it introduces] this idea of being comfortable with failure," Gosling adds. "And I think Neil, especially, is such a unique human being. It was an amazing opportunity to try and understand him a little and get to know him. And to get to know him in the way that we did, through his kids and through his friends, and through his sister and co-workers." 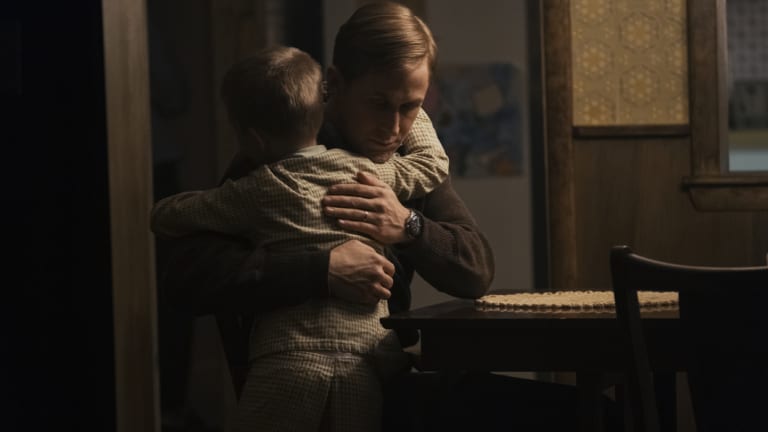 As an individual, Armstrong was by all accounts a thoughtful, gentle family man. Precise, measured and perhaps, at least as he is portrayed in First Man, someone who has survived the grief of losing a child by locking it away. His marriage to Janet is solid but both bear the scars of loss and both, at times, seem at a loss for the right words to express their feelings.

Armstrong was, Gosling says, a man whose sense of his own importance, or the significance of the moon mission, was never overstated. "Even if you take in to consideration Neil's iconic line on the moon – one small step – it's by all accounts something he didn't think very much about," Gosling says. "And because it took all of his focus to land safely, [he said] once he was able to do that then he said he would then think about what to say."

What came up time and again in his research, Gosling says, was that Armstrong was a man who was "always able to see everything in its larger context. He could see a giant leap in one small step. He could see himself as both a man representing his country and human being representing mankind." 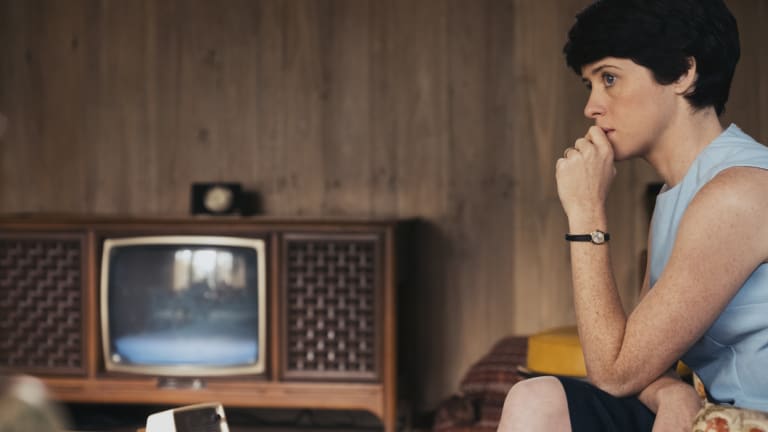 The film includes a moment taken from real life when Armstrong is asked, during a press conference, what he would like to bring to the moon. "More fuel," he answers. "You find that time and time again with him," Gosling says. "That's how he views things. He will view things both in the micro and the macro in the same moment."

It also sets the stage for some of the film's most poignant moments. Not moments of flag-bearing patriotism, as the early headlines rallied for, but quieter contemplations in the vast silence of the heavens, about life, and man and God, and our place in the universe.

As unscientific as it might seem, such thoughts are quite typical for astronauts. "I think it's hard not to," says Gosling, recalling the observation made by Apollo 17 astronaut Eugene Cernan, who said "we went to explore the Moon, and in fact discovered the Earth." There are a lot of great examples, Gosling says, of astronauts who were affected in that way.

Chazelle concurs. "It was actually something that was important to Ryan that when we were working to try to, or in some cases in the movie allude to, in Neil's case, how much of a poet he could be," Chazelle says. "And it's something I think you find a lot in some of these other astronauts." 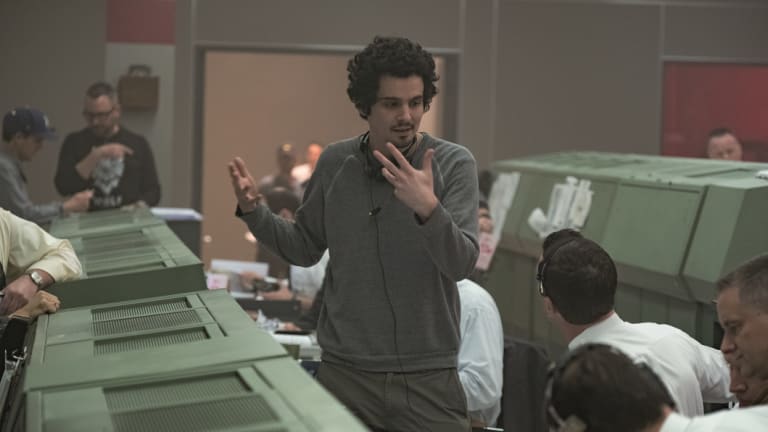 Director Damien Chazelle on the set of First Man.

Cernan, who made that now iconic observation in the wake of seeing an "Earthrise" from the perspective of the moon's surface, is a man Chazelle recalls as a "kind of surly, kind of tough guy [who] it seems like if you said the word poetry to him he'd smack you.

"But then he's talking about being on the moon and he uses expressions like, sitting on God's front porch, and things like that and you're just like, that's so beautiful," Chazelle says. "Or Alan Bean, who returned from the moon and spent the rest of his life doing paintings of space and of the moon."

What compelled Chazelle and Gosling on their own lunar odyssey was the manner in which such a life altering experience seemed to turn everyone it touched into an artist of one sort or another.

First Man is released on October 11