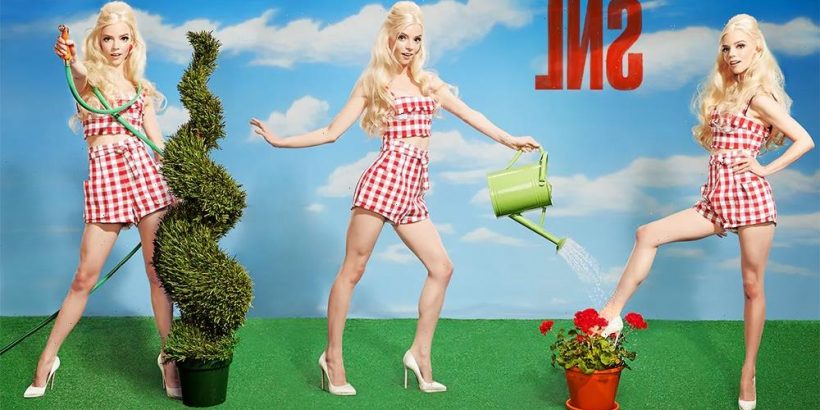 Saturday Night Live brought their 46th season to an end last night with Split and The Queen’s Gambit star Anya Taylor-Joy making her hosting debut. The show kicked off by reflecting on one of the weirder years in the show’s history, which returned to production with strict safety measures in place due to the coronavirus pandemic. Weirdly enough, it’s a bit nostalgic for how COVID-19 ended up bringing them (and us) closer together, even as we had to literally be further apart.

However, the most intriguing part of the season finale of Saturday Night Live is what seems like hints of two or three cast members who may be on the verge of leaving the series. But we’ll get to that later. First, let’s dig into the best and worst sketches of the Anya Taylor-Joy hosted Saturday Night Live.

Picture with Dad – It’s prom season, which means it’s time for all fathers to be overprotective of their daughters and joke about it by posing next to their prom dates while holding a rifle. But what happens when this chauvinistic joke goes wrong? Someone loses an integral body part. There are times when SNL being on network television can stifle some edgier gags, but when it comes to graphic visuals, the necessity to blur certain imagery can make things even funnier, and that’s certainly the case when it comes to the bits that Beck Bennett blew off his body. Bennett’s 180-degree turn from eager Dad to weeping father is hilarious, especially the extended bit at the end as he tires to get his daughter and her boyfriend to promise not to have sex.

Making Man – First of all, I have to say that the dummy used in this sketch is funny on its own. It looks like Kyle Mooney as a taller, more muscular caveman. Plus, the wig picked for Mikey Day’s character is a subtle enhancement that makes his general demeanor as an artist of the human body, and the bit of arrogance that comes with it, land firmly. This isn’t the first time comedy has questioned the logic of the design of the human body, but there are some funny and odd bits here, including that terrifying single big toe idea for human feet.