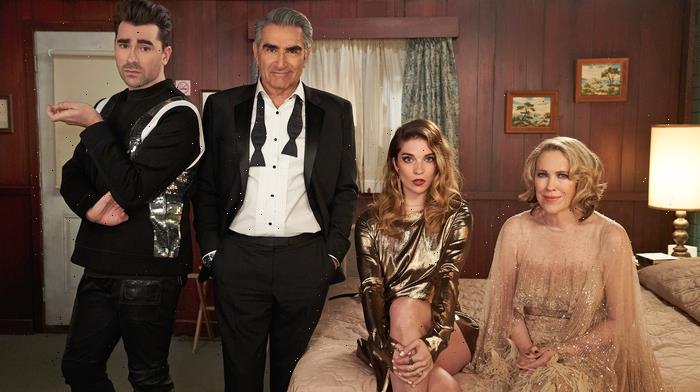 Sometimes it seems as though Schitt’s Creek fell out of a clear blue sky. The series premiered back in 2015 to a small, mostly Canadian audience, but its final seasons blew it up into a global phenomenon. It’s won several awards and countless hearts, becoming a very popular quarantine binge, and an all-around wholesome time.

We became attached to the Rose family, and watching them grow was a hopeful, hilarious, and altogether heartwarming experience. David’s incredible facial expressions, Moira’s fashion, Johnny’s eyebrows, and Alexis’ entire personality have become inescapable on social media, and the obsession has only grown. But the show ended over a year ago and we’re starting to run dry.

Thankfully, series creator and star Daniel Levy has a knack for giving us the most amazing gifts that we didn’t even know we needed: he’s publishing a book about the beloved series.

From Daniel and Eugene Levy comes Best Wishes, Warmest Regards: The Story of Schitt’s Creek. Its been acquired by Trapeze Books, slated for publication in October 2021, and is already available for preorder. This tie-in book is said to capture the “essence and alchemy of all six seasons,” making it a much-needed celebration of the cast and characters. The book will feature character profiles, behind-the-scenes scoops, and will zoom in on some of the series’ most celebrated moments.

Since the end of the series, Dan Levy has been bombarded with the question of a potential continuation. Perhaps a Schitt’s Creeks movie is in our future? While Levy hasn’t confirmed any plans, he hasn’t shut down the possibility, either. Following the series’ sweep at the 2020 Emmys, for which the show took home 9 awards, the cast sat down to chat with Vanity Fair, and Levy finally laid out his thoughts on continuing the show:

“Here’s the thing: This is the best way we could have ever ended the show. So if there is an idea that ever pops into my head, worthy of these wonderful people, it has to be really freaking good at this point because this was a really nice way of saying goodbye.”

If you listen closely, you’ll hear the sound of a door slowly creaking open…more Schitts Creek isn’t entirely out of the question! Levy didn’t shut down the possibility, he in fact welcomed it — but only if inspiration happens to strike. He’s since said that if anything more is to come, it won’t be for some time. He told Out:

“We had such a great time making the show and I think if the idea is right, I would love to explore what a movie could look like. But, I don’t have that idea yet. I’m still searching for it. My fingers are crossed, but I also think you need to give people a little time to miss you. So, I’m taking some time and we’ll see what happens in the next couple of years, but my fingers are tightly crossed.”

Until then, the tie-in book will give us a chance to revisit the beloved characters. Plus, Schitt’s Creek has proven to be an incredibly rewatchable series, so we can always revisit it in full unit Levy blesses us with another big announcement.