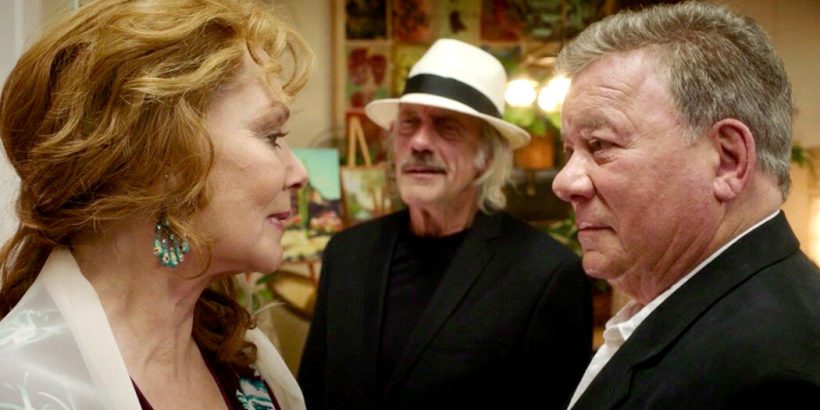 There are many here among us for whom the prospect of spending 90 minutes in the presence of William Shatner would be unalloyed bliss. The world is a funny place. In any event, for them, “Senior Moment,” a romantic comedy, will be, well, unalloyed bliss.

Shatner plays, in the consistently bemused fashion that’s become a hallmark of his performances, a character compelled to go where no man he has played has gone before: the DMV.

The “Star Trek” legend here incarnates Victor Martin, a former test pilot living his retirement dream in Palm Springs, tooling around in a silver Porsche. In this vehicle he gives his best friend, Sal (Christopher Lloyd), rides to and from a retirement center. He poses for a photo shoot with the car and a young bikini model (Katrina Bowden) whom he imprudently tries to romance. And he scares the devil out of a cafe owner Caroline (Jean Smart) with the car one night, while drag racing against Pablo (Carlos Miranda), a cheerful low rider.

That race gets Victor’s license suspended, and his car impounded. While taking the bus, he meets cute with Caroline, and a more age-appropriate affair begins. In reality, Jean Smart is only 20 years younger than Shatner, while Katrina Bowden is well over 50 years younger. Such is Hollywood.

Bowden was a regular on the sitcom “30 Rock.” Lloyd created a beloved character on “Taxi.” Smart, among other things, was a fixture on “Designing Women.” So “Senior Moment” presents actors from four significant and still-well-regarded TV shows in a picture that’s significantly less-well-written than any random episode of any of those shows you could name. Giorgio Serafini’s direction is also uninspired. This is the kind of movie that is usually defended with one word: “harmless.”

Senior Moment
Not rated. Running time: 1 hour 32 minutes. In theaters and on Apple TV, FandangoNow and other streaming platforms and pay TV operators. Please consult the guidelines outlined by the Centers for Disease Control and Prevention before watching movies inside theaters.