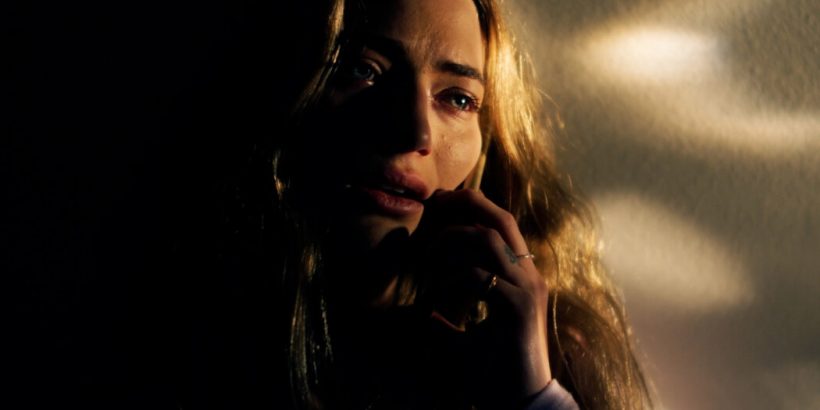 Most of the characters in “Shook” are low-level social-media influencers, bottom-feeders in a world of self-involved make-believe. Since their lives are built on the intersection of voyeurism and exhibitionism, these 20 somethings are perfect fodder for the kind of horror movie where an omniscient psychopath uses intrusive surveillance.

Unfortunately, “Shook,” which is streaming on Shudder, does not fully exploit this intriguing premise and devolves into far-fetched inanity.

Mia (Daisye Tutor) is a rising social-media princess who, rattled by a murder, forgoes a very important livestream of something head-scratchingly mundane to dogsit for her sister, Nicole (Emily Goss). Alas, a mysterious, unseen caller has Mia’s number and can track all her moves within Nicole’s house — the movie almost entirely takes place in that single location — subjecting Mia to an increasingly unhinged barrage of threats and demands.

For half the film, the director Jennifer Harrington builds up suspense by encasing Mia in a densely woven network of voice and video messages, calls and texts. Mia’s entire life is filtered through technology, which is now used against her, and her cavalier attitude toward privacy backfires as well. Tutor acts up a storm considering that most of her emoting happens while staring at a phone. Still, Mia remains a cardboard character in search of blood-soaked redemption.

At its best, when it looks as if Harrington wants to pursue a larger point and satirize Instagrammed lives, “Shook” feels like a garish hybrid of a “Black Mirror” episode and a 1980s slasher movie — an electronic soundtrack largely pulled from the Italians Do It Better record label is a callback to the synthetic John Carpenter scores of yore.

But “Shook” is done in by its final reveal, which manages to be simultaneously improbable and conventional. For engagement, we’ll have to look somewhere else.