PG, 128 minutes. Australian Centre for the Moving Image, Saturday, October 20 and 27, and November 3 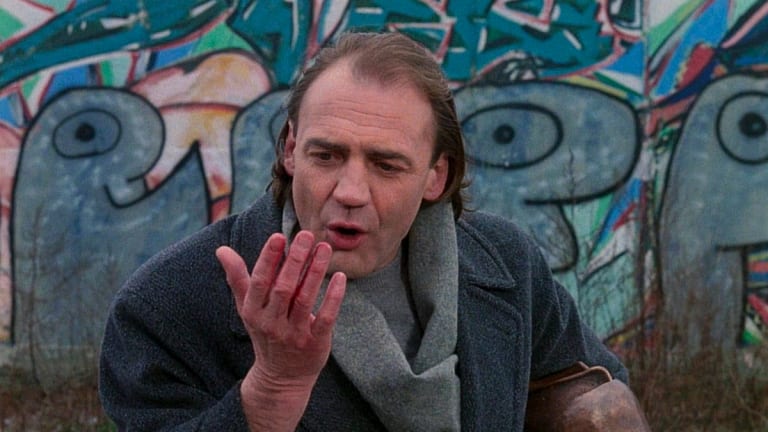 Bruno Ganz as the angel Damiel in Wings of Desire.

Because it combined black and white and colour sequences, every print originally struck of Wim Wenders lyrical 1987 allegory was six generations removed from the original. This top-to-tail digital restoration of what was one of the final works by the legendary French cinematographer Henri Alekan is visually ravishing on the ACMI screen, beginning with the sepia-tinged angel's view of a divided Berlin experienced by eternal watchers Damiel (Bruno Ganz) and Cassiel (Otto Sander). As the camera floats on celestial air, the angels tend to the populace, whose authentic faces are matched to the private doubts of their inner monologues. As the story passes from soul to soul, including Peter Falk playing himself as the star of a World War II film shooting on location, it becomes a paean to memory and the history of what was then a ramshackle, unfinished city. Wenders' Mitteleuropa magical realism, complete with a young Nick Cave and Solveig Dommartin's luminous trapeze artist Marion, draws down on what it is to be human with bittersweet contemplation and romantic longing.

Using masterfully long and sadly alert camera takes to capture the collapse of society in the east of the Ukraine in 2014 and 2015 when Russian forces began to covertly aid separatists, Donbass is an episodic examination of cruelty and humiliation that reaches an excruciating – and defiantly persistent – pitch. Beginning with an assistant director marshalling actors who are performing in fake news reports of strikes on civilians and taking in the stale stench of systematic corruption, sudden violence, and the dislocation that comes with the fraying of both borders and reason, Ukrainian filmmaker Sergei Loznitsa (My Joy, Austerlitz) couches his bleak humour in documentary-like settings to create an environment that is unsettling and increasingly warped by its own logic. References circle back to previous instalments, so there's less an ending than a pause in these destructive events.

German filmmakers Hans Block and Moritz Riesewieck reveal a hidden view of the withering, worrying power of behemoth social media platforms with this documentary about the online clean-up crews who endlessly decide between deleting or ignoring disputed content. Shot in part like an espionage thriller, to reflect the covert nature of the industry and those involved, The Cleaners begins with the night shifts of moderators in the Philippines who continue the developing world's tradition of dealing with the first world's garbage. "I've seen hundreds of beheadings," one moderator admits, and as subcontractors they're tied to crippling performance targets and mostly denied psychological care. Their snap decisions reveals how cultural differences, journalistic necessity, historic perspective, and political relevancy are all flattened by the likes of Facebook, YouTube and Twitter, whose ability to alter the discourse – or stoke mass violence in countries such as Myanmar in the case of Facebook – makes them more powerful than most nation states. It's a damning indictment of a problem with no easy solution.