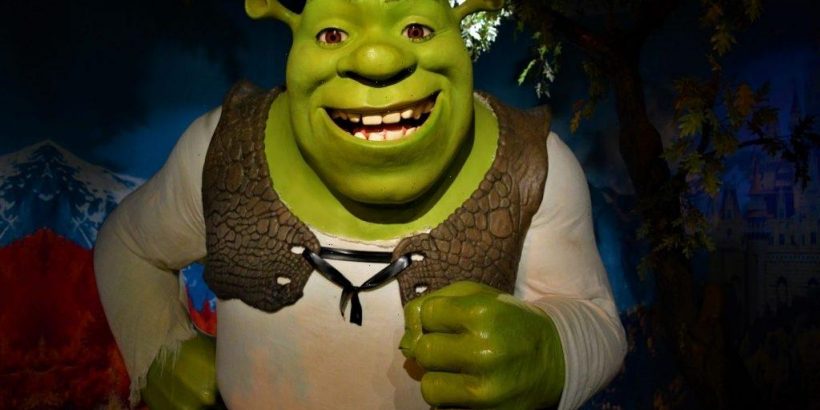 Shrek remains one of the most successful children’s film franchises in history more than two decades after its premiere. With an all-star cast including Mike Myers, Eddie Murphy, Cameron Diaz, and John Lithgow, the series was a hit with all ages. However, the lovable ogre almost had a different voice, and the journey to Myers’s final accent is filled with tragedy and intrigue.

When producers started planning Shrek in the mid-1990s, they wanted to ensure that the buddy dynamic between him and Donkey was as entertaining for adults as with kids. This began looking at Chris Farley and David Spade’s work in Tommy Boy and Black Sheep for inspiration. Peter Segal, who directed Tommy Boy, noted how Farley got the part of Shrek in an interview with Uproxx.

“Well, Terry Rossio and Ted Elliot, who wrote Shrek, I met with them years after Shrek came out, and they said, ‘You know who we patterned the donkey and the ogre off of? As far as their relationship? That was Spade and Farley in Tommy Boy. That’s why we wanted Farley,’

Donkey went to Murphy, but Farley reportedly had most of the dialogue recorded at his death. Whether DreamWorks wanted to shy away from discourse about his drug overdose or needed an actor who could be there for sequels, they recast Shrek following the comedian’s death, and another SNL alum took his place.

Michael Myers takes it over

When Myers took the role and started recording lines, something wasn’t right. However, he recorded 90% of the dialogue. BuzzFeed notes how he felt that something was out of character for a feared ogre to have a Canadian accent.

“There is a class struggle in Shrek between the fairy-tale kings and queens and the common people,” Myers told USA Today. “I always thought that Shrek was raised working-class. And since Lord Farquaad was played English, I thought of Scottish.”

Shrek may tell the story of land removed from reality, but the thought went into every action. Many celebrities who move over to voice-acting do so in their own realm. It changes things when one gets an actor such as Mike Myers on board. Myers is known for his comedian-like ability to disappear into roles like Austin Powers and Doctor Evil.

According to The Guardian, it took him a while to build up the confidence to change his voice, but it came with a hefty cost when he did. DreamWorks was on board, and rather than settling for dialogue that had already undergone two mostly-finished drafts; they offered $4 million to make Myers dreams come true. It proved to be a great decision.

Shrek wasn’t just a hit but a game-changer. It was kid-friendly enough to speak to its target audience and irreverent enough to speak to parents. A series of sequels were inevitable. Shrek became a cultural institution. While the sequels never garnered the same impact that the original had, they remain in steady rotation in houses worldwide.

Just because a movie is for kids, it doesn’t mean it’s immune to problems. From the tragedy that shook the preproduction to the eleventh-hour switch on Shrek’s accent, Myers’ story shows the artistry and mindset that goes into playing a character like this. The film may have worked with the other voice, but it’s hard to picture Shrek with Myers’s natural voice behind his ogrish snarl.