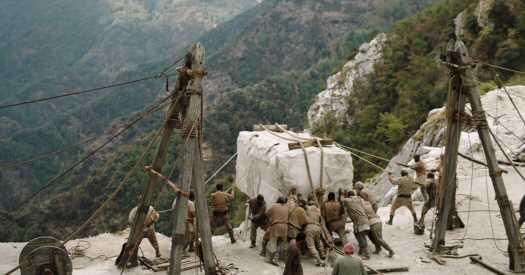 “Sin” is the second feature from the Russian director Andrei Konchalovsky to reach virtual cinemas in recent months, and it is not nearly as strong or vital as “Dear Comrades!” (still available to rent). An austere, demanding sit, “Sin” — a Russian-Italian coproduction with Italian dialogue — nevertheless has a stubborn integrity in exploring the competing forces of patronage and creative inspiration that Michelangelo confronted in the 16th century.

The film depicts the period when Michelangelo (Alberto Testone) worked on the Tomb of Pope Julius II. After Julius dies, the movie’s Michelangelo agrees to make the commission exclusive, effectively setting up a conflict of interest: Julius belonged to the della Rovere family, a rival of the Medicis; and the Medicis, who now control the papacy, are ideally positioned to support Michelangelo going forward. (Those familiar with the players will surely get more out of the film.)

Forever requesting money, promising to meet impossible deadlines and ranting about other artists (“He doesn’t know anything about sculpture!” he scoffs more than once of Raphael), Michelangelo appears to have more luck than strategy in pursuing his single-minded artistic ambitions. Half- or perhaps fully mad, and unfailingly surly, he talks aloud to Dante, his inspiration.

The emphasis is on agony, not ecstasy — and definitely not on sanitation. Moviegoers may duck to avoid being hit by falling waste. The film finds its pulse, and an image that captures the magnitude of the artist’s obsession, when Michelangelo takes on the Herzogian task of conveying an intact block of marble from a vertigo-inducing quarry in Carrara to lower ground. Even others’ lives won’t stand in his way.