Soumitra Chatterjee, an Indian actor who incarnated the beauty and fragility of youthful idealism in films by the director Satyajit Ray and helped solidify Mr. Ray’s place in cinematic history, died on Sunday at a hospital in Kolkata, India. He was 85.

His daughter, Poulami Bose, said the cause was brain damage and organ failure brought on by a case of Covid-19.

Mr. Chatterjee, who appeared in more than 350 movies, rose to fame playing the title character in “The World of Apu” (1959). The film, the third in Mr. Ray’s famous “Apu" trilogy, cast Mr. Chatterjee in an epic role familiar from canonical works of literature: A young man imagines a glorious literary career from a shabby garret apartment in a capital city but then encounters the hard realities of adult life, which he struggles to transcend.

The role was Mr. Chatterjee’s film debut, and it catapulted him to critical notice abroad and celebrity in India.

In one memorable scene, while delivering a monologue about the novel he plans to write, Mr. Chatterjee furrows his brow with intellectual severity, strikes the faraway look of an imagination at work, pauses and points for emphasis as he narrates the plot, and finally, with arms raised in triumph, smiles with joy at the act of creation. The sequence appears to have the naturalness of improvisation, but it was actually the product of laborious preparation.

Mr. Ray’s son, Sandip, said he saw the work that Mr. Chatterjee put into his roles when he peeked at one of the actor’s scripts. “It was full of handwritten notes,” he told The Telegraph, Kolkata’s English-language daily, in a recent interview. “Every minute detail of voice modulation, pause, look, movement and whatnot was in there.”

For “The World of Apu,” Mr. Chatterjee kept a diary in which he specified what Apu was doing every moment he was offscreen. He brought the same intensity to “Charulata” (1964), a Ray movie about tensions in an upper-class family set in 1879, in which Mr. Chatterjee plays an aspiring poet and essayist. He spent six months mastering the 19th-century style of Bengali handwriting so that the scenes that depicted him in the act of composition could appear authentic.

The young writers Mr. Chatterjee played in “The World of Apu” and “Charulata” set a template for the other characters he became known for. In Mr. Ray’s “The Golden Fortress” (1974), about kidnappers looking for a long-forgotten treasure, Mr. Chatterjee plays a private eye who also has an ambition that is softened by high-mindedness and impracticality. In “Days and Nights in the Forest” (1969), which follows young friends on a vacation, Mr. Chatterjee’s businessman character is sardonic and self-confident, but, like the aspiring writers, yearns for a different life.

His characters often wore a shabby-chic outfit of sport coats and scarves — even when, in one movie, he briefly appeared as an ash-covered coal miner. 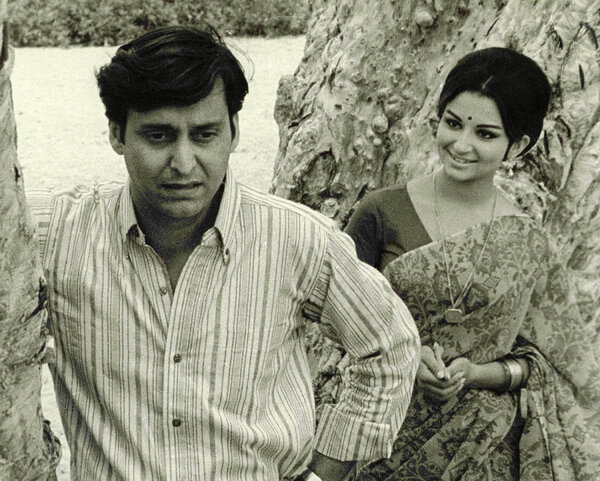 Mr. Chatterjee had the ability to project guilelessness, sometimes as a naïf but on other occasions as a selfless hero. His performance as Feluda, Mr. Ray’s riff on Sherlock Holmes, enshrined the character as a standard-bearer of Bengali cultural values. For a crime-fighting detective, Feluda was unusually intellectual, the sort of sleuth who would blow open a case by discovering, as he does in “The Golden Fortress,” a spelling mistake in a hotel register.

Mr. Ray invented Feluda as a character in a series of children’s stories he began writing in the 1960s, which he adapted into two movies starring Mr. Chatterjee, “The Golden Fortress” and “The Elephant God” (1978). Since Mr. Ray’s death in 1992, there have been more than a dozen new Feluda movies with a succession of new stars, but none have come close to supplanting Mr. Chatterjee’s portrayal of Feluda in the hearts of fans.

Internationally, Mr. Chatterjee attracted an admiring audience, but it was composed mainly of critics and connoisseurs who followed Mr. Ray’s work and lived near theaters that showed foreign movies.

The New Yorker film critic Pauline Kael praised Mr. Chatterjee as Mr. Ray’s “one-man stock company” and wrote in 1973 that Mr. Chatterjee and his frequent co-star, Sharmila Tagore, were “modern figures with overtones of ancient deities.” When some of Mr. Ray’s early films were first released in the U.S. in the 1960s, New York Times critics called Mr. Chatterjee’s performances “strikingly sensitive“ and “timid, tender, sad, serene, superb.” American filmmakers like Martin Scorsese and Wes Anderson have cited some of the Ray movies Mr. Chatterjee starred in as inspirations.

In 2015, “The World of Apu” returned to theaters across the United States as part of a restoration of the trilogy. American outlets like Criterion have made subtitled copies of movies by Mr. Ray starring Mr. Chatterjee available for streaming online.

Despite the success of their partnership, Mr. Chatterjee spoke later in life about not wanting to be seen as “a Satyajit Ray puppet.”

And yet the line between the two men sometimes blurred. While looking at Mr. Ray’s early drawings of Feluda, Mr. Chatterjee remarked that the character resembled Mr. Ray himself. “Really?” Mr. Ray replied. “Several people have told me that I’ve drawn him with you in mind.”

Soumitra Chatterjee was born on Jan. 19, 1935, in Krishnanagar, a small town in what was then the British province of Bengal. His father, Mohit Kumar Chatterjee, was a lawyer and a member of the Indian Independence Movement, and his mother, Ashalata, was a homemaker. She named Soumitra after a character from Bengali literature and, rather than sing him lullabies, would recite poems by the Bengali polymath Rabindranath Tagore.

Soumitra starred in plays held in the family’s courtyard, where bedsheets had been transformed into curtains and the aluminum foil of his parents’ cigarette packets became crowns for he and his young relatives to wear as costumes.

He avoided schoolbooks, but he was reading Tolstoy at 14. He skipped class to watch movies not meant for children, but got caught when he overheard a conversation between his parents about a particular scene and chimed in.

He moved to Kolkata to attend City College and graduated with a degree in Bengali literature. He was inspired to become a professional actor after coming under the tutelage of the Bengali actor and director Sisir Bhaduri, who advised Mr. Chatterjee to understand the roles he was assigned by scanning a script for subtext like a detective searching for clues.

In 1960 he married Deepa Chatterjee, his childhood sweetheart.

After Mr. Ray launched Mr. Chatterjee to Bengali superstardom and international art-house renown, Mr. Chatterjee’s artistic ambitions expanded. He founded, with a college friend, a literary magazine, Ekkhon (Bengali for “Now”), which published the work of eminent writers like Mahasweta Devi and illustrations and scripts by Mr. Ray. Mr. Chatterjee also wrote more than a dozen books of poems and wrote, translated, directed, produced and starred in plays. He exhibited his watercolor paintings across India.

Later in his film career, Mr. Chatterjee became typecast as a genial grandpa who upheld the noble values of a bygone era in roles that were, by his own admission, “hackneyed” or even “detestable.” “One feels sad for Soumitra,” one Bengali reviewer wrote.

In addition to Ms. Bose and his wife, Mr. Chatterjee is survived by his son, Sougata, and two grandchildren.

Mr. Chatterjee, who was 14 years younger than Mr. Ray, regarded him as a mentor and paid him a visit at his home every Sunday morning.

His admiration was not “based on external considerations, like how successful he was, how many awards he got or how wild people were about him,” Mr. Chatterjee said in a video interview. “I could see his artistic vision right before my eyes. It was a vast, universal vision. He had an ability to understand all of life.”