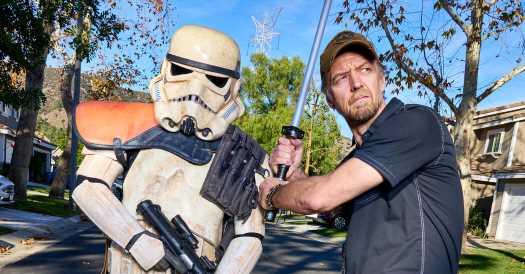 For the first time in half a decade, a year has gone by without a new “Star Wars” film, a planned pause that happened to coincide with the pandemic. But across YouTube, there are plenty of movies set in a galaxy far, far away: those made by fans. Instead of the sci-fi saga’s familiar title crawl and brassy score, though, their work usually begins with notices affirming that rights to the story belong to Lucasfilm.

Such films have existed almost as long as the franchise itself. Early examples were spoofs, like the 1978 short “Hardware Wars” and a 1997 Stormtrooper-centric sendup of “Cops” called “Troops.” Lucasfilm held annual fan-movie contests in the decade before Disney acquired the company in 2012. But Disney’s stewardship, coupled with the wide availability of higher-quality moviemaking tools, has inaugurated a new era of fan creativity.

“If anything, it’s been more alive than it’s ever been,” said one filmmaker, David Ortiz. “You have all these high-budget fan films that you didn’t have 10 or 15 years ago, and people have more easy access to things like VFX, 3-D modeling and Blender,” a free digital animation software. “I think right now, if anybody’s wanting to do a fan film, this is the time to do it.”

Some filmmakers credit Disney with raising viewership for their tributes. A New York Times analysis of nearly 150 fan films on YouTube with at least 100,000 views found that more than 75 percent were uploaded in the six years since the debut trailer for “The Force Awakens,” the first entry in the latest trilogy. And several popular examples have eagerly built on the new films’ characters and lore.

But others chafe against Disney’s narrative choices. Some have revived characters and plotlines that the studio dropped or that hark back to an older era of “Star Wars” filmmaking. In a moment of both broad excitement and deep disillusionment with the franchise, these works have flexed fandom muscle in a creative tug-of-war over whom the galaxy really belongs to.

“A lot of people were really frustrated with some of the films” in Disney’s trilogy, said Jason Satterlund, a professional writer and director who in 2019 made a live-action short about Obi-Wan Kenobi set during the Jedi master’s exile on the desert planet Tatooine. “We wanted to recreate the love that we had when we first saw ‘A New Hope’ and ‘The Empire Strikes Back.’”

Satterlund called “Kenobi,” which has more than 5.7 million views on YouTube, an “opportunity to redeem” the franchise for fans like himself. “George Lucas created something that we fell in love with so much that we don’t want it to be ruined,” he said. “If we sense that someone is violating that, it can have a very visceral reaction. And I think that’s what you’re seeing.”

Satterlund was quick to add that his short was not meant to stoke “negativity” toward Disney or impugn its narrative choices. But in YouTube reaction videos and elsewhere, audiences couldn’t help but make comparisons. “People overwhelmingly said, ‘Wow, I haven’t felt that much emotion in this universe for a long, long time.’”

Ortiz acknowledged that enthusiasm for his project, based on a 1996 story line that Disney de-canonized, came partly from disappointed fans. He said he viewed those reactions warily. “I don’t want somebody knocking on my door and saying, ‘All right, you’ve got to stop this.’ Because there is a history where, if you poke Disney too hard, they will come and bite.”

Disney said it has encouraged fan creativity and invited disagreement over its creative choices. “That’s one of the beauties of ‘Star Wars,’ that it sparks that kind of conversation and that kind of passion,” said a Lucasfilm spokeswoman, Lynne Hale, “and we always welcome the debate.”

But the discourse can have a dark side. After the recent trilogy centered women and people of color far more than the earlier “Star Wars” movies, some fans fueled online harassment of performers or critiqued female characters in misogynistic ways.

Some fan films deliberately reject that toxicity. More diverse casting means “richer stories, more nuanced stories and new perspectives within the galaxy,” said Stephen Vitale, who directed “Hoshino,” a 2016 short about a female Jedi — played by Anna Akana — whose hubristic misuse of a lightsaber costs her her eyesight.

Moviemaking fans of other fantasy franchises have complex relationships with the companies that own them, and “Star Wars” fan films do walk a legal tightrope. Disney asks that they be clearly marked, not raise money through crowdfunding, omit copyrighted media, and not profit from ticket sales or online advertisements. The company doesn’t appear to discriminate between fan films made by professionals and those made by amateurs, provided they follow its rules. “There is a point where you do have to protect your copyright,” Hale said.

Not everybody complies. An Indiegogo campaign to finance “Kenobi” got help from James Arnold Taylor, who has voiced the character in “Star Wars” animated television shows. (He also plays the villain in “Kenobi.”) Others have turned to Kickstarter to crowdfund their work.

And some who try to observe the rules have run into trouble. Warner/Chappell, which shares some “Star Wars” music rights with Lucasfilm, in 2019 claimed copyright over a Darth Vader fan film, “Shards of the Past,” posted on YouTube. A torrent of online criticism followed, accusing the company of seeking to profit from fan work. Lucasfilm ultimately intervened to lift the claim. (Hale said she could not comment about copyright claims.)

As technology stretches the capabilities of fan storytelling, questions of propriety could become even thornier. Several films by Peter Csikasz, a Hungarian university student, combine digital assets from official “Star Wars” video games with original motion-capture animation. Csikasz said the games’ developers were aware of his work, even as fan-made “Star Wars” video games have been repeatedly shut down.

As these films grow technically more artful, they have also grown more expensive. A two-minute animated movie can cost more than $5,000 to produce. The budget for “Kenobi” approached $100,000, Satterlund said. (Costly expectations can be prohibitive: last month, Ortiz indefinitely suspended his project after failing to raise $20,000 through crowdfunding.)

Disney’s rules mean many fan movies are financial losses, but a well-executed production can drive YouTube subscribers, attract sponsors for future work or open doors to professional opportunities. “It greases the wheels,” Satterlund said of his short. “It’s helped get me in the room to talk to somebody.”

Disney’s ambitions to further expand the franchise — a raft of new shows was announced in December — may lead to more creative differences with parts of its audience. But there are also signs of mutual appreciation. Earlier, the company confirmed longstanding rumors that it would develop a streaming series focused on Obi-Wan Kenobi. Satterlund said he expected the official spinoff to explore thematic terrain similar to his short.

He called that prospect exciting — and flattering. “It would be a huge honor if they used some of what we came up with,” he said. “Better, even, if they called me in. If Disney called and said, ‘We want you to join the team,’ I’d be there tomorrow.”