In the last year, the rise of TikTok has led to a crop of new influencer collab houses, particularly in Los Angeles. The HoneyHouse is among them.

Self-described as the "oldest house on TikTok," HoneyHouse launched in August 2020 and is made up of millennials between the ages of 26 and 32 — as opposed to some other houses filled with Gen-Zers.

Behind the concept of the house was J.T. Barnett, a former professional hockey player and fitness influencer, and brand strategist Nick Dio. Barnett was already creating vlogs, and during quarantine, wanted to create content with more characters. The two friends started to brainstorm.

"What we wanted to do was get a bunch of people in a house together that were all under the same vertical of health and wellness and create a sort of reality show primarily on the platform of TikTok," Barnett said. "And so that was where we started."

Now, the house has over 700,000 followers on TikTok and recently moved into a new home in Los Angeles, with a few new members. The members are all couples, too, working full-time jobs in a variety of industries including e-commerce, wellness, and advertising.

"We are a family-friendly, brand-safe creator and content house that is going to turn into a bit of a media and publishing company, where we're going to have different episodic shows that come out," Dio said.

The shows include lighthearted challenge-style videos on TikTok using household items, such as a curling competition with cans of tequila seltzer, which doubled as a sponsorship. The house also plans on launching a YouTube and podcast series.

"We have a seasonal development model, so we're only in the actual house for 30 days at a time," Dio said. "And that creates about two months worth of content."

For the first season, HoneyHouse landed sponsorships with brands such as LetsGetChecked (for its at-home COVID-19 testing kits) and Mamitas, a clean tequila seltzer. As the group heads into "season two," it's currently working on securing new brand sponsorships.

The group's pitching strategy for sponsorships is spearheaded by Dio and Barnett, and it's a mix of inbound and outbound opportunities, they said. Dio handles a lot of the pitching and initial conversations, reaching out directly to brands that align with the house (often consumer packaged goods) or advertising agencies.

Then, Barnett comes in and brings the idea to life, explaining to potential sponsors how they'll use their platforms to create something unique for the brand.

They use a 17-page media kit when communicating with brands, which outlines the house's audience, the different types of shows and content they offer, and an introduction to the members and house itself.

"We recognize right now that TikTok is an awareness platform," Dio said. So they pitch the house for growth and website traffic, rather than converting to sales. And this affects their rates.

"We back our costs out of a CPM (cost per thousand) basis where it's about a dollar per thousand [views]," Dio said.

And so far, they have a breakeven cash flow from their sponsorships, which allows them to fund the seasonal costs, including rent and production, they said. Right now, their focus is on growing their audience.

Here is the full 17-page media kit for The HoneyHouse that's being used to pitch prospective sponsors:

The HoneyHouse media kit starts out with a simple title slide. 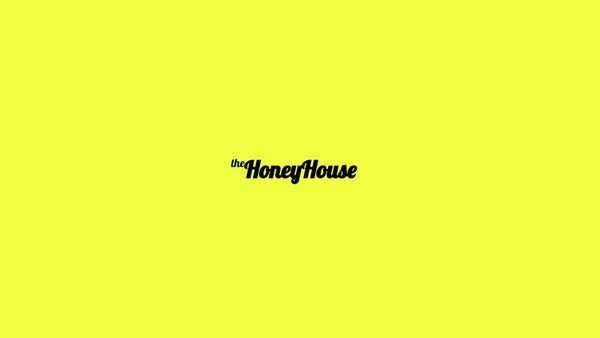 The kit begins with a simple title slide.

Barnett said that the media kit was designed to be in line with the house's brand.

"We spent the extra couple of hours on making our deck visually appealing and eye-catching, the same way that we do with our content on TikTok or Instagram or wherever," Barnett said.

Then they introduce the house. 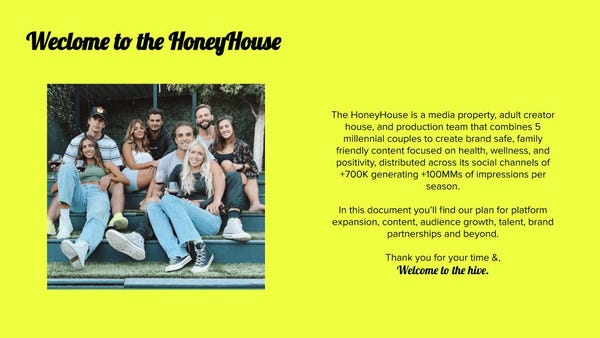 The house introduces itself and provides a brief bio, defining the house as a "media property."

"The HoneyHouse is a media property, adult creator house, and production team that combines 5 millennial couples to create brand safe, family friendly content focused on health, wellness, and positivity, distributed across its social channels of +700K generating +100MMs of impressions per season," it reads.

HoneyHouse includes a Venn diagram to describe the house's identity. 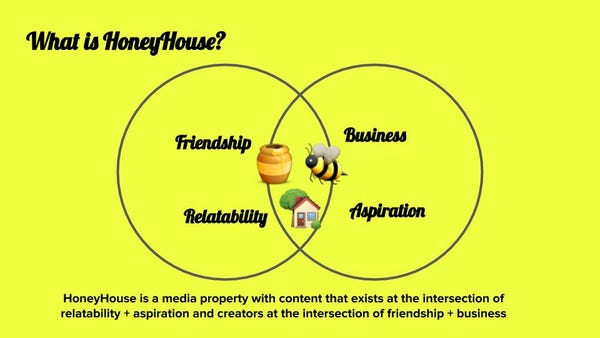 The HoneyHouse is described as an intersection of friendship, reliability, business, and aspiration.

HoneyHouse breaks down its audience and growth data. 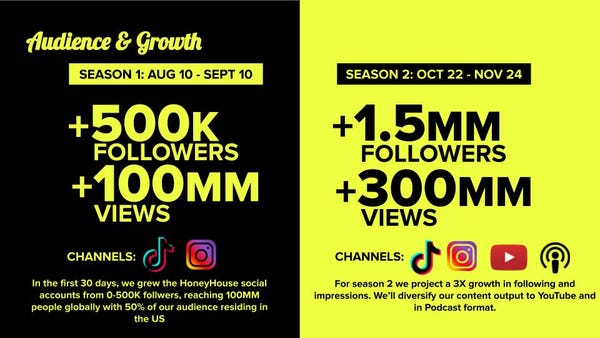 In the first month of launching the house on TikTok, HoneyHouse grew by over 500,000 followers and had over 100,000 million views.

"TikTok is a platform that, you know, predominantly is Gen Z," Dio said. "We're looking to really grow that millennial core demo over the next couple of months by expanding into things like YouTube and podcasting."

They include press and media features in the last few months. 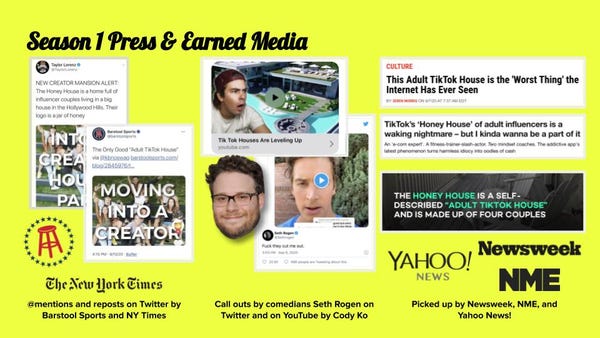 The HoneyHouse includes that it's been tweeted about by New York Times reporter Taylor Lorenz and Barstool Sports.

It has also been mentioned in a Cody Ko YouTube video and Seth Rogan tweeted about it as well. 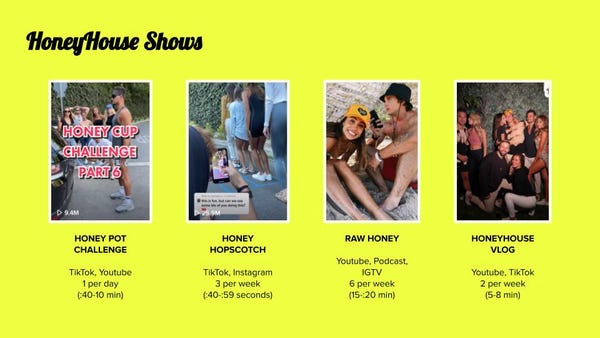 Then they highlight examples of HoneyCup Challenge videos. 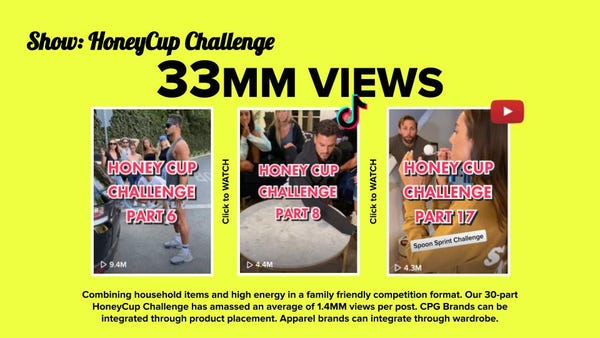 The challenge videos are used for brand integrations on the HoneyHouse TikTok, which was a 30-part series last season and had over 33 million views.

They include three examples.

The Honey Hopscotch series on TikTok had over 53 million views. 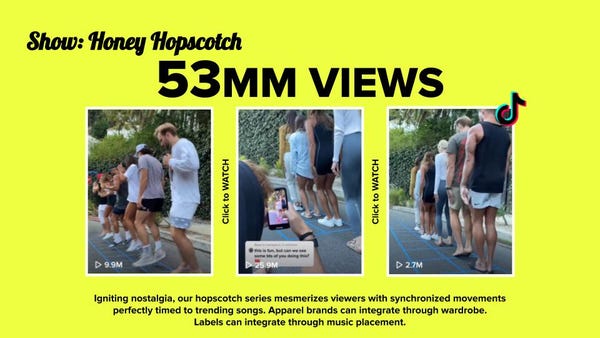 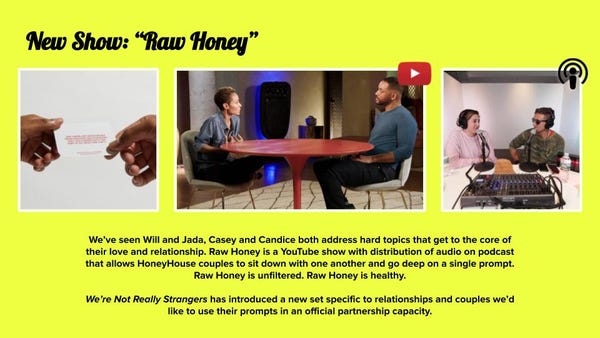 Raw Honey will be a YouTube series and audio podcast, where couples from the house sit down and talk about a topic or prompt.

The house is also introducing a vlog series. 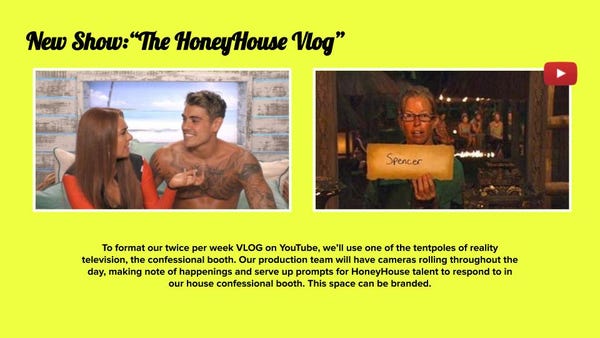 HoneyHouse will post a vlog twice per week on YouTube, in the style of reality television's "confession booth."

They add that this can also be a sponsorship opportunity for brands. 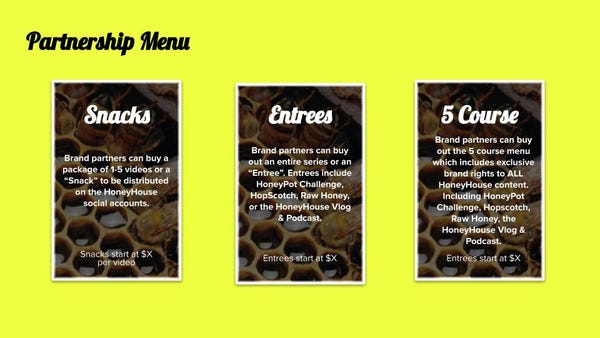 The HoneyHouse has three tiers of sponsorships it pitches:

Their starting prices range according to brands and season, and are currently between $5,000 and $250,000, Dio said.

It then lists its members for the current season of HoneyHouse. 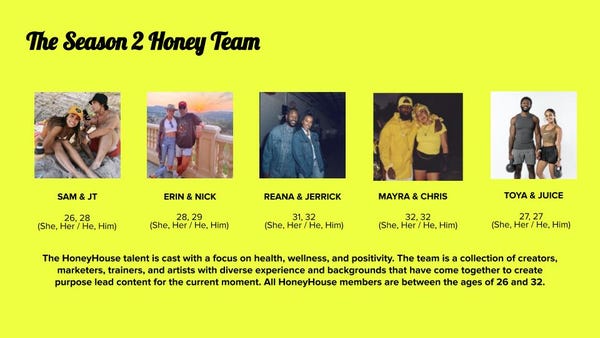 For season two, the couples include: 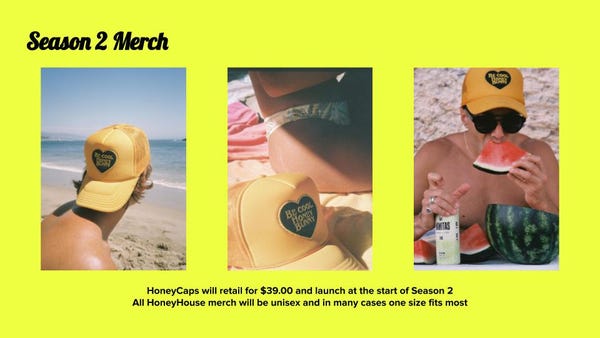 HoneyHouse created a line of hats for the second season.

Then, it outlines the upcoming HoneyHouse seasons for 2021. 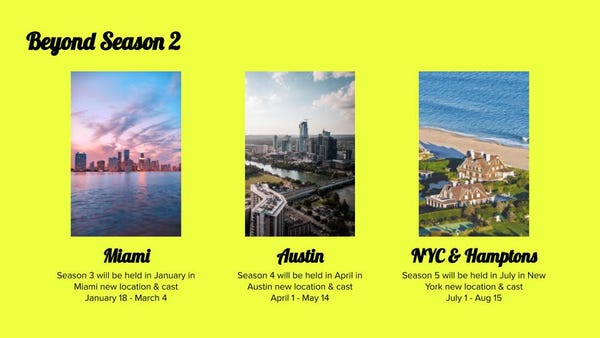 HoneyHouse has three more seasons planned for 2021, which will include the two founders and their partners, as well as new couples.

It also includes a breakdown of the house's intellectual property and ownership. 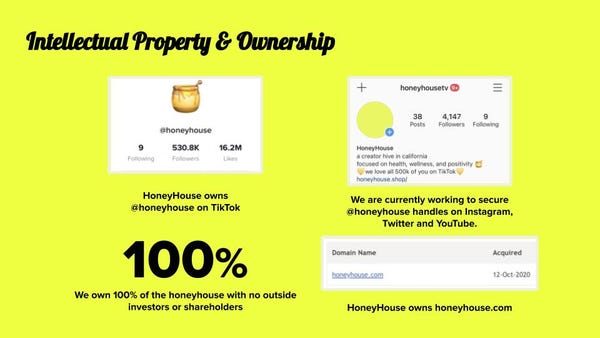 "We own 100% of the HoneyHouse with no outside investors or shareholders," it reads.

The kit concludes with a thank you from the two founders. 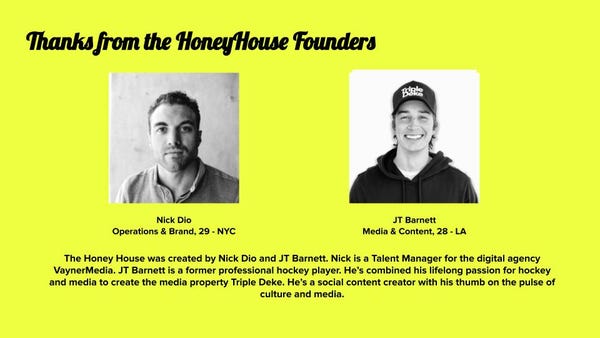 Dio is a talent manager at the digital agency VaynerMedia and Barnett is a former professional hockey player, content creator, and founder of the media property Triple Deke.

HoneyHouse includes one last closing side. 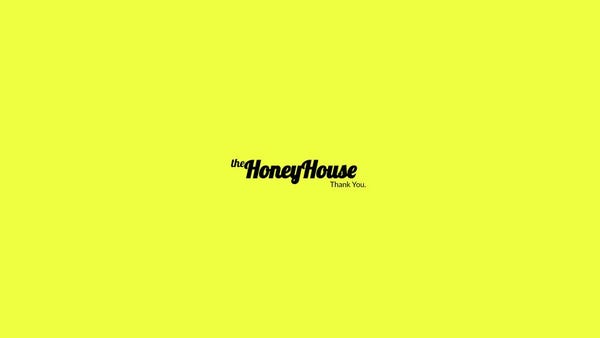