It can happen abruptly, while flipping through reruns of Friends or rewatching a movie like Armageddon or Working Girl: a sight of the twin towers, dominating the New York City skyline like steel sentinels.

"I used to get so startled when I first saw them in repeats and old shows," said Sally Regenhard, a skyscraper-safety advocate whose 28-year-old son, Christian, a New York probationary firefighter, died when the towers fell 18 years ago. 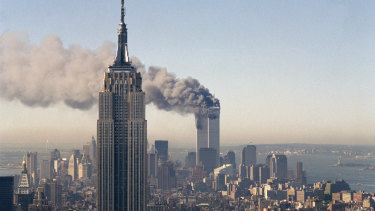 The twin towers of the World Trade Center burn behind the Empire State Building in New York on September 11, 2001.Credit:AP

Although she still views the towers as "instruments of death," she added, "I do get less startled now."

Since the September 11, 2001, attacks on the World Trade Center, filmmakers, television producers, Hollywood executives and even curators at the National September 11 Memorial & Museum have pondered how best to deal with material showcasing the towers in opening montages (The Sopranos, Sex and the City); in scenes of computer-generated conflagration (Armageddon, Independence Day); or as a setting for romance (Kissing Jessica Stein) or affectionate satire (The Simpsons).

Of course, it's not just the family members of those lost who are dismayed by images of the towers, which until that day had been a symbol of New York and its financial might. For just about anyone old enough to remember the attacks, these scenes are likely to evoke sorrow, even today.

"It almost seems like it's the biggest issue in American etiquette," said director Sam Raimi, who in 2002 confronted an unusual challenge: how to release a long-awaited blockbuster, Spider-Man, that featured an elaborate scene in which the hero foils the helicopter escape of bank robbers by trapping them in an enormous web stretching from the north tower to the south tower. 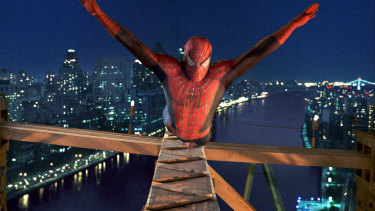 Spider-Man director Sam Raimi removed references to the towers in his 2002 blockbuster.Credit:Reuters

For Raimi and his associates, leaving in that scene was "unfathomable."

"We didn't think it was our right, in the middle of the summer after this terrible massacre, to show a scene of such heartbreak for so many," he said. Raimi added that he was thinking about victims' children going to see the movie for fun or as an escape. "I didn't want to pull them back into the heart of that tragedy," he said. 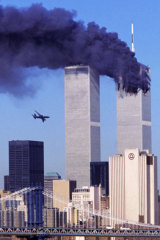 From 2002 onwards, TV shows started to delete the twin towers from their opening sequences. Credit:AP

Raimi was not alone in excising the towers from film or video in the immediate aftermath of their collapse. Both The Sopranos and Sex and the City deleted them from their opening credits, starting in 2002. The directors of Kissing Jessica Stein and People I Know, whose films were on the verge of premiering when the attacks took place, delayed their releases so they could reshoot scenes that depicted the towers as indomitable landmarks.

The producers of The Simpsons also halted the re-broadcast of a 1997 episode featuring a tiny Homer racing across the wide trade centre plaza (he was trying to make it to a bathroom on the top floor of the north tower) as the skyscrapers loom above him.

But as time passes, even the worst wounds begin to heal. As glimpses of the pre-2001 towers began to conjure wistfulness and nostalgia more than horror and trauma, the Simpsons episode was put back into syndication. And this year, the original hand-drawn cel depicting Homer's mad dash to relieve himself was welcomed by the 9/11 museum's curator, Alexandra Drakakis, as a "hilarious and tender" donation.

"I know my heart hurts when I see them in old images," said director Bart Freundlich, who did not delete several shots of the towers from his 2001 film, World Traveler, starring Julianne Moore and Billy Crudup. "They don't just represent something tragic but something marvellous about the city as well."

Thinking back nearly two decades, filmmakers like Jennifer Westfeldt, who was a writer and co-star of Kissing Jessica Stein, have not exactly second-guessed their editing decisions but looked back on them with the bittersweet benefit of time and distance.

Westfeldt debuted her movie at the Toronto International Film Festival on Sept. 10, 2001, just hours before the attacks. She recalled the joy she felt after her film, replete with gauzy, golden-hour shots of the towers, was applauded. A New Yorker, she awoke the next day to news of the attacks and spent the next 48 hours camped in front of a TV, crying and contacting loved ones.

Her movie had a second screening on Sept. 12, she said, and "the people who went basically reported back that there were audible gasps and sobs at those images." 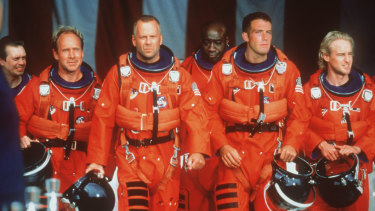 Director Michael Bay has fought against excising shots of the towers from his 1998 blockbuster Armageddon.Credit:Publicity

"It was just gut-wrenching," she added. "All these images that were meant to be beautiful and romantic were now harrowing and triggering in the midst of a rom-com that was intended to make you laugh, not traumatise you."

Westfeldt said she and her colleagues debated intensely about whether to leave in the trade centre scenes and risk "inflicting more pain on people," or remove them and possibly "erase or misrepresent history." In the end, they chose to reshoot the scenes. She asks herself now whether the original scenes might have stood the test of time as the despair of losing the towers ebbed.

Michael Nozik, producer of the 2002 movie People I Know, starring Al Pacino, felt the same way. "We wanted to make sure we were not seen as exploitative and insensitive at a time when there was so much grief," he said of the reshoot. Now, he said, "It's nice to look at all the beautiful images of the trade centre because it's more like honouring them than the horror of recalling that event." 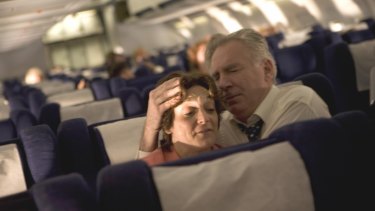 Some directors, though, do not support altering a pre-9/11 picture based on post-9/11 sensibilities. Among them is Michael Bay, the maker of Armageddon, a 1998 summer disaster flick that shows one of the towers ablaze after a meteor strike.

"Movies are shot, edited and finished for the world to see," Bay said. "They don't get reedited because history changes. If we go there, that means every movie must change. Every book, every short story, every painting of New York in the past 30 years. It would never end."

Other film and TV makers say it comes down to timing – to asking yourself whether you've violated the rule of "too soon".

British director Paul Greengrass grappled with that question when he decided, in 2006, to make United 93, about the September 11 plane that crashed in Pennsylvania after its passengers revolted against their hijackers. As the first commercial post-9/11 feature, it was assailed as distasteful before its release. But when it came out, it was critically acclaimed and saluted by the passengers' loved ones for its verisimilitude and poignant "let's roll" ending.

"When I see the towers now, I get a feeling of sadness and loss," Greengrass said. But, "in a funny way," he added, "I also see them as a beacon of what was and what can be."

Jan Seidler Ramirez, chief curator at the memorial museum, said her institution would not shy away from exhibiting both serious and silly images of the towers. Visitors, she said, can watch a nine-minute film that pays homage to the trade centre's role in The Wiz, Home Alone 2 and various Superman movies, thrillers and crime dramas.

"I see it as a positive sign of civic healing for the towers to be reintroduced into the background of films and elsewhere," Ramirez said, "or seen in postcards and comic books of that era." She even has the campy King Kong 1976 movie poster on display, in which the towers serve as the title character's last bastion against mankind's helicopters and flamethrowers.

"For the kids who never saw them," she added, "they now have a reference for how tall they were and the way they owned the skyline."